Documentary film “Maria by Callas: In Her Own Words” attempts to present the glimpses of humanity and personality from Maria Callas, one of the most extraordinary opera singers in the 20th century. Mainly consisting of various archival photographs and footage clips nearly all of which have never been shown to the public, the documentary is entertaining to watch especially when it focuses on numerous glorious moments in Callas’ artistic career, but, unfortunately, it eventually falters and meanders when it tries to show us who she was as a human being, and that was particularly disappointing to me.

At the beginning, the documentary gives us a brief summary of Callas’ early years. Born to a Greek immigrant family living in New York City, 1923, she already showed considerable talent as a singer even during her childhood years, and she was eventually sent to Greek by her mother for more study and training when she was only 13. Although she could not enjoy her childhood years much thanks to being constantly pushed by her mother, young Callas did not feel so bad about that, and she soon came to show more of her considerable talent and potential under the tutelage of her lifelong mentor Elvira de Hidalgo.

Shortly after the World War II, Callas took the first steps for her professional singing career, and a series of archival footage clips showed us her meteoric ascent to stardom during next several years. In many of her successful opera performances, she came to her audiences as a force to reckon with, and she frequently drew attention from the public and the media as performing here and there around the world.

However, as often told to us via the reading of her personal letters by opera singer Joyce DiDonato, Callas was not particularly happy in her personal life. As she experienced more success, she became more estranged from her husband, and that eventually led to a civil lawsuit between them as she decided to end their marriage. In addition, she got some notoriety for being difficult and tempestuous, and she found herself becoming the target of public ire in Italy when a big opera performance of hers had to be canceled at the last minute due to a unexpected case of bronchitis, which not only affected her singing ability but also caused a sort of stage fright.

It looked like her career was going downhill as she kept facing troubles on her way, but Callas steadily maintained her public appearance with calm grace. After a brief period of hiatus, she successfully came back to stage around the early 1960s as impressing her audiences more than ever, and several archival footage clips show us her being at the peak of her career. While I must confess that I winced due to my sensitive aural nerves whenever she hit high notes on the screen, I could also see nonetheless why she still remains to be a legend even at present, and I came to consider listening to more of her performances.

However, mainly because these archival footage clips of her performances inevitably steal the show, the documentary inevitably becomes less engaging whenever it tries to focus on Callas as a human being, and, unfortunately, it does not have many interesting things to show and tell us during that section. Even though it courteously steps aside for letting Callas talk about herself and her life via her archival interview clips and personal letters, Callas still remains a rather distant figure as often restraining herself from fully revealing her feelings and thoughts, and that is the main reason why the documentary often seems a little too shallow at times. 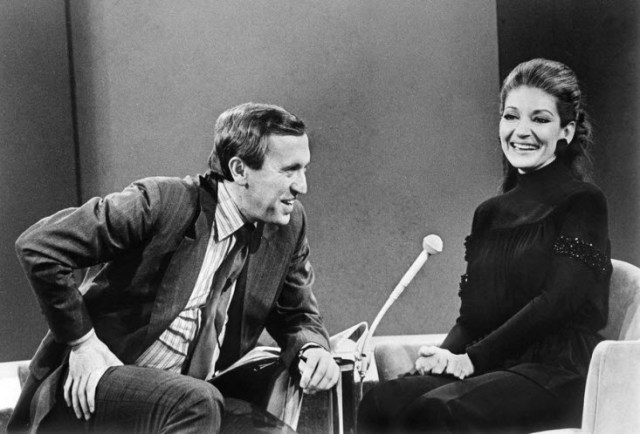 The documentary does not delve much either into Callas’ long relationship with Greek shipping magnate Aristotle Onassis, who became quite close to her not long after their first encounter in 1957. Around the time when her marriage was over, Onassis was the guy she could lean on, so it seemed that they would marry sooner or later, but then he suddenly came to marry Jackie Kennedy in 1968. While that certainly hurt Callas’ feelings a lot, her relationship with Onassis is not presented with enough depth or insight in the documentary, and that is the main reason why a part involved with their subsequent reconciliation does not resonate as much as intended.

During its last 20 minutes, the documentary merely shows what happened during the last several years of Callas’ life and career, and that is where it loses more of its narrative pacing. While it is surely touching to see how she made a triumphant comeback in the early 1970s, the documentary unfortunately skimps on a part involved with her collaboration with filmmaker Pier Paolo Pasolini in “Medea” (1969), and it is a shame that the documentary does not explore much how these two different but equally wonderful artists worked with each other.

In the end, Callas remains to be as elusive as before, so I left the screening room with lingering disappointment, but “Maria by Calls: In Her Own Words” is not a total failure at least. While handling his human subject with care and respect, director Tom Volf did a competent job of presenting a number of big moments of Callas’ artistic career, and I was not so surprised when I hear one audience giving a brief applause in the middle of the screening. Although I cannot wholly recommend it, the documentary is enjoyable to some degree, and you may be entertained more than I was if you simply expect to watch Callas as an artist.

This entry was posted in Movies and tagged Artist, Documentary, Real-life figure, Singer. Bookmark the permalink.