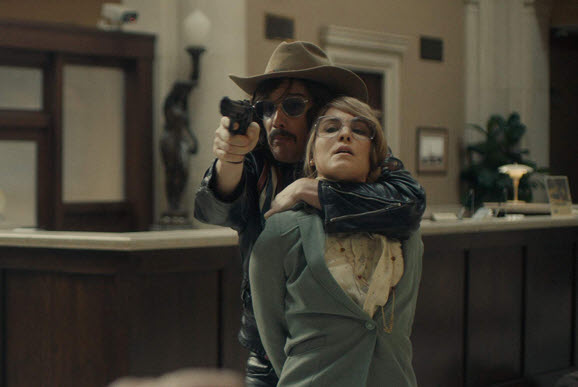 “Stockholm” tries to give us a close look into that absurd real-life incident of bank heist and hostage crisis which inspired that infamous term ‘Stockholm syndrome’, but there is nothing much to surprise us in its fictional presentation. Although it manages to keep its story and characters rolling during most of its short running time (92 minutes), the movie does not show us anything particularly new or revealing on the whole, and it eventually becomes another run-of-the-mill bank heist film clearly influenced by “Dog Day Afternoon” (1975) and other countless similar crime flicks.

At the beginning, the movie puts us right into the ongoing situation surrounding its criminal hero played Ethan Hawke. Although he does not seem to be prepared much, this guy, who is assumed to be Kai Hansson at first, goes straight into a bank in Stockholm with a bag full of weapons including a machine gun, and everyone in the bank is soon thrown into panic and confusion as he casually shoots in the air. Once most of them get out of the bank under his permission, he holds three remaining people as hostages, and then he waits for the response from the Swedish police.

It subsequently turns out that Hansson wants something else besides money. He wants his old colleague Gunnar Sorensson (Mark Strong) to be released from a prison where he has been incarcerated, and he also demands a safe getaway for him and Sorensson in addition to a substantial amount of unmarked cash. Chief Mattsson (Christopher Heyerdahl) is not that willing to follow Hansson’s demand, but he is well aware of how risky and sensitive the circumstance is, especially when not only everyone in Sweden including the Prime Minister but also the whole world come to pay lots of attention to what is going on inside the bank.

Steadily maintaining his unflappable attitude, Chief Mattsson tries to deal with Hansson as sensibly as possible while also trying to figure out any good way to make Hansson surrender as soon as possible, but things keep getting more absurd and problematic as time goes by. Even after Sorensson is released and then sent into the bank as a sort of mediator between Hansson between Chief Mattsson, Hansson adamantly sticks to his position even though the situation becomes more disadvantageous for him, and Chief Mattsson and his men accordingly get more pressured and frustrated.

It goes without saying that Hansson is way over his head from the very beginning. Although there is not much chance of escape for him and Sorensson, he still believes that he and Sorensson will be free in the end, and we are not so surprised when he later comes to conflict with Sorensoon, who is actually not that close to Hansson and seems to be willing to betray him if necessary.

In the meantime, Bianca Lind (Noomi Rapace), who is one of Hansson’s hostages, finds herself getting more involved with Hansson than she ever imagined. At first, she simply wants to be released as soon as possible for returning to her dear family, but then, as getting more frustrated and terrified, she sympathizes a lot with Hansson, and her subsequent behaviors catch off guard the Swedish Police as well as the media. During her phone interview with a TV reporter, she casually expresses her growing sympathy toward Hansson, and she even comes to act as a peacemaker when the mood becomes quite tense between Hansson and Sorensson at one point later in the story. 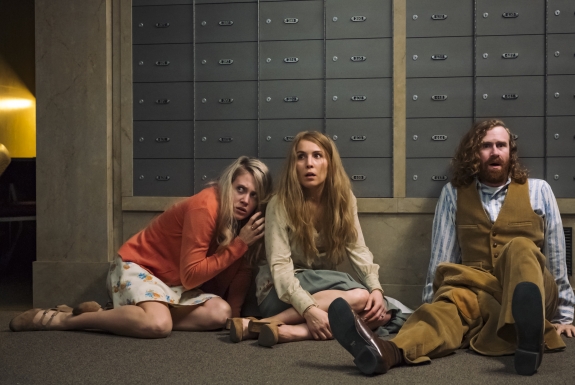 Around that narrative point, the movie tries to generate more tension and suspense as pushing its main characters toward the inevitable finale, but its eventual outcome is rather disappointing compared to what has been steadily built up to that narrative point. While efficiently moving from one narrative point to another during its first two acts, the screenplay by director/writer Robert Budreau unfortunately falters during its predictable last act, and its lackluster ending does not help much to say the least.

The main cast members of the film try as much as they can do while filling their broad characters as required. Certainly getting many juicy moments to chew without any restraint, Ethan Hawke manages to bring some offbeat sensibility to his incorrigibly inept character, who eventually becomes sort of endearing to us even though he is the main bad guy of the story. In opposite to Hawke, Noomi Rapace is relatively under-utilized in comparison due to her underdeveloped character, but she did a fairly good job as ably conveying to us her character’s growing attraction to Hawke’s character, and she and Hawke are interesting to watch whenever they happen to interact with each other on the screen. In case of a few substantial supporting performers in the film, Mark Strong brings some moody intensity to his character as usual, and Christopher Heyerdahl holds his own place well as a strong-willed police chief ready to go for any drastic measure if that suits him.

Overall, “Stockholm” does not entirely fail mainly thanks to the good efforts from its cast and crew members, and I did enjoy some of its period details including several songs by Bob Dylan on the soundtrack, but it did not engage me enough while not going much beyond my vague knowledge on that real-life incident. For now, I am considering revisiting “Dog Day Afternoon”, and I think you will have a much better time if you watch that great film instead.