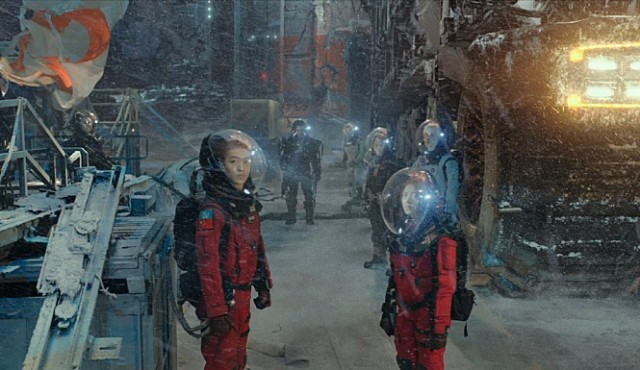 Chinese film “The Wandering Earth” is a goofy but ambitious SF movie which deserves some kudos for trying to reach to the level of your typical Hollywood blockbuster SF film. Although it is sometimes a little too cheesy and corny for my taste, the movie delivers lots of big entertaining moments as required, and you may come to forgive its several notable flaws including weak storytelling and thin characterization – especially if you are willing to be amused by its sheer preposterousness like I was during my viewing.

At the beginning, the movie gives us an obligatory prologue explaining its story premise in detail. Around the middle of the 21st century, the Sun has suddenly aged and then starts to be turned into a big red giant star to swallow not only the Earth but the whole Solar System, and all the nations around the Earth come to form the United Earth Government (UEG) as also launching an ambitious planetary project to save the Earth as well as the Humanity. Thanks to their massive joint efforts, thousands of gigantic thrusters running on fusion power are constructed around the half of the planet, and then it starts its long journey to the Alpha Centauri system as propelled by these big thrusters.

Of course, this interstellar journey, which shall take at least 2,500 years, demands a lot to the humanity. As these thrusters are being operated, the Earth stops its rotation, and that inevitably leads to a number of big catastrophes around the world while the half of the Earth is going to be stuck in darkness during next several thousand years. Furthermore, as the Earth moves away from the Sun, its surface temperature soon goes down far below zero Celsius degree, and the humanity accordingly has to retreat to hundreds of underground cities built around the world.

The crucial point of this interstellar journey is when the Earth passes by Jupiter, which is supposed to provide some gravitational boost for the departing Earth. When Liu Peiqiang (Wu Jing) is about to leave a big international space station where he has worked for 17 years along with a bunch of other astronauts from many different countries, everything seems to be going well as the Earth steadily navigates under the constant guidance of the space station, but, unfortunately, an unexpected gravitational shift happens, and the Earth is consequently drawn toward Jupiter. If nothing is done to change its course within next 37 hours, the Earth will eventually collide with Jupiter, and that certainly means the end of the humanity.

While Liu Peiqiang tries to find any possible way for saving the planet and the humanity despite being ordered to be in hibernation chamber just like others in the space station, the movie shows us the ongoing situation on the Earth mainly via Liu Peiqiang’s son Liu Qi (Qu Chuxiao), who unintentionally finds himself in the middle of the circumstance along with his stepsister Han Duoduo (Zhao Jinmai) shortly after they illegally go up to the surface of the Earth. Due to that gravitational shift caused by Jupiter, numerous thrusters around the planet are stopped, and the joint mission to repair and then reboot those thrusters is soon started around the Earth, but, alas, the situation only gets worse, especially after Jupiter begins to suck the atmosphere of the Earth.

Liu Qi and Han Duoduo could just go back to their underground city along with their grandfather, but they happen to come across a military unit led by Captain Wang Lei (Li Guangjie), who are tasked with bringing a certain big, important device to one of those thrusters located in Southern Chinese region. As they reluctantly assist Wang Lei and his unit, they naturally go through a series of perilous moments, and director Frant Gwo, who adapted Liu Cixin’s novella of the same name along with no less than six co-writers, did a competent job of generating enough thrill and excitement for us as Liu Qi and other characters around him avoid one peril after another. Although I must point out that the CGI in the film does not look always good despite its big budget (around $ 50 million), the movie does not lose its sense of fun at least, and we gladly go along with its plucky mood mixed with a bit of local nationalism.

And the movie becomes all the more preposterous as eventually reaching to its expected climactic part, which mainly revolves around whether our main characters can activate one of the biggest thrusters in time for inducing an interplanetary happening which may make astrophysicists roll their eyes. It feels rather outrageous even to me, but, what the hell, the movie is already outrageous right from its story premise, so I guess I am wrong in expecting any hard SF element from the movie.

As enjoying these goofy spectacles in the film, I also noticed that the movie frequently shows deficiency in terms of storytelling and characters. While many of its characters are more or less than colorless archetypes, the movie is also occasionally hampered by its blatant melodramatic moments as well as its ponderous expository moments, and that made me observe its spectacles from the distance at times instead of wholly embracing them.

Anyway, “The Wandering Earth”, which was released on Netflix in South Korea after its brief local theatrical release although it became China’s second highest-grossing film of all time (It earned no less than $691 million in China, by the way), is a fairly watchable SF movie, and I was entertained enough despite having some reservation. Although it does not break any new ground in its genre territory, but it mostly works as a well-made blockbuster product, so I will not grumble for now.

This entry was posted in Movies and tagged action, SF, Space. Bookmark the permalink.