As your average seasoned moviegoer, I know well that some bad thriller films like “Basic Instinct 2” (2006) can be categorized as ‘so-bad-so-good’, but Neil Jordan’s latest film “Greta” is not even that bad enough to amuse or tickle me. Sure, it looks a bit promising at first as building up some tension between its two main characters, but it eventually crumbles as riddled with a number of ridiculous plot contrivances which are hard to forgive in my inconsequential opinion, and the overall result is messy and mediocre to say the least.

The story begins with a seemingly accidental encounter between its two main characters. When Frances McCullen, a young woman working as a waitress in New York City, happens to come across a handbag left by someone while she is returning to her apartment by subway, she does not suspect anything, and she decides to contact the owner of that handbag once she finds an address from that handbag, which turns out to belong to a middle-aged foreign lady named Greta Hideg (Isabelle Huppert).

When Frances eventually goes to Greta’s modest but cozy residence, she is warmly greeted by Greta, and she soon finds herself getting closer to Greta as time goes by. Probably because of the recent death of her dear mother, she needs someone to lean on, and Greta seems to be willing to be a mother figure for Frances as, according to her, she has been quite lonely especially since her daughter left her a few years ago.

Of course, it does not take much time for Frances to realize that there is something disturbing about Greta. At one point, she happens to discover certain objects which clearly show that her encounter with Greta is not coincidental at all, and this unnerving discovery of hers certainly makes Greta’s seemingly caring attitude look all the more insidious.

As advised by her roommate/best friend, Frances tries to distance herself from Greta, but, not so surprisingly, Greta clings more onto her as showing more of her obsessive side. She keeps calling or texting her, she stands for hours outside a restaurant where Frances works, and she even appears right behind Frances when Frances is about to enter her apartment at one point.

And that is just the beginning, and Frances accordingly becomes more scared and desperate as not knowing what to do about Greta. She tries to put a restraining order on Greta, but she is frustrated to realize that she will have to go through lots of procedures for that, and Greta continues to harass her by any means necessary.

As Frances is cornered by Greta step by step, the movie provides a few good moments to worthwhile to talk about. I liked a tense scene where Frances suddenly finds that her roommate is being stalked by Greta, and I also appreciated a cringe-inducing scene where Greta comes to Frances’s workplace as a guest and then mercilessly holds Frances on the edge until she eventually goes for a full psychotic mode in front of Frances and others.

However, the screenplay written by Jordan and his co-writer Ray Wright fails to give any insight or understanding on this apparently insane lady, and Jordan does not even try to push his story and characters further for generating more nasty fun for us. Considering its lurid and twisted aspects, the movie is clearly in the need of the boldly stylish and perverted touches of Brian De Palma movies, but it merely trudges from one narrative point to another without much surprise or suspense, and we only become more aware of many artificial moments throughout the film.

Anyway, Isabelle Huppert diligently carries her part as she did in many films in her long, illustrious career, and her performance here in the film certainly calls for something far darker and nastier than whatever I saw from the movie. As a master of human morbidity, she is constantly fascinating as willingly throwing herself into her character’s depravity and madness, and I was quite disappointed as seeing how the movie ruins her admirable effort during its last 20 minutes.

On the opposite, Chloë Grace Moretz acquits herself well as steadily holding her place in front of Huppert, but she is mostly stuck in her relatively bland role which does not demand much from her, and the same thing can be said about several notable main cast members in the film. While Maika Monroe, who was memorable in “It Follows” (2014), is seriously under-utilized as Frances’ roommate, Colm Feore does not have many things to do except literally phoning in his performance as required, and Stephen Rea, who previously collaborated with Jordan in several films including “The Crying Game” (1992), enters and then exits a few minutes later without leaving any substantial impression on us.

In conclusion, “Greta” is a middling misfire which will be forgotten quickly for everyone involved with it, and that is probably its only saving grace besides Huppert’s enjoyably deranged performance. Although the movie does not serve her well, she had some fun with her character at least, and she surely reminds me again that she is never boring to watch no matter what she does on the screen. 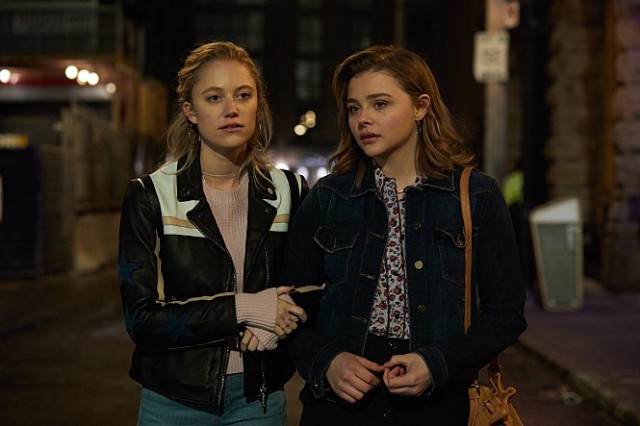 This entry was posted in Movies and tagged Stalking, Thriller. Bookmark the permalink.