First, let me tell you a bit about my admiration on how tenacious Terry Gilliam has been during last two decades. Although his prime period mainly represented by “Brazil” (1985) and “12 Monkeys” (1995) had already passed many years ago, he has kept trying to make movies while sticking to his own style and imagination as before, and I respect his efforts even though I did not like much most of his recent works such as “The Imaginarium of Doctor Parnassus” (2009).

In case of his latest work “The Man Who Killed Don Quixote”, some of you have probably heard about its long, notorious production history full of bad luck and troubles. While Gilliam started to prepare for the production of the film in 1989, it took 9 years for him to secure the funding for the production, and the shooting of the movie finally began in 2000 with Jean Rochefort and Johnny Depp, but, unfortunately, due to a series of setbacks including the one resulted from Rochefort’s illness, the production was eventually terminated to the frustration of Gilliam and everyone else involved in the production. During next 16 years, Gilliam tried to restart the production of the film, but he kept facing more troubles on his way, and that certainly adds more notoriety to the movie, which became a sort of holy grail beyond his reach.

Finally, Gilliam came to restart the production of the film with Adam Driver and Jonathan Price as his two leading actors in 2017, and he completed the shooting of the film several months later, but, alas, there came another trouble to frustrate him a lot when the movie was about to be shown at the Cannes Film Festival in last year. Due to the legal dispute between him and his former producer Paulo Branco, the movie was held in limbo for a while, but, fortunately, it was eventually allowed to be shown at the Cannes Film Festival, and it was subsequently released in a few countries including US and Canada.

I am glad to see that the movie is released in South Korea this week, but I also have to tell you that “The Man Who Killed Don Quixote” feels like an anti-climactic ending to its dramatic production history. Although there are several good moments to amuse and entertain us, the movie often trudges and stumbles mainly due to its weak narrative and thin characterization, and I came to observe its story and characters from the distance despite the admirable efforts from Gilliam and his cast and crew members.

The story of the movie is mainly told through an advertising director named Toby Grisoni, who is played by Driver. While he becomes more frustrated with the problematic production of a vodka commercial in some rural location of Spain, Grisoni happens to come across a DVD copy of an old student film which he and his friends made around 10 years ago in a nearby village, and he cannot help but become nostalgic as watching that film, which, like the commercial on which he is working, is based on “Don Quixote”. When he gets himself into another trouble on the next day, he promptly decides to go to that village, and he soon meets several village people who still remember him.

After learning that an old man who played Don Quixote for his student film is still alive, Grisoni instantly goes to where the old man lives, but he is caught off guard to see the old man mired in the delusion unintentionally caused by the making of his student film. The old man, played by Price, has believed that he is really Don Quixote, and he even thinks Grisoni is Sancho Panza, who is, as many of you know, Don Quixote’s famous squire.

Quite perplexed and frightened by the old man’s madness, Grisoni quickly goes away from him, but, of course, he soon finds himself getting more involved with the old man, and that is where the movie begins to blur the line between reality and fantasy via a number of weird but humorous moments. There is an amusing sequence involved with a bunch of illegal immigrants, and then we get a comical duel scene between the old man and a mysterious knight, and then the story eventually arrives at a part where things get more outrageous for Grisoni and his crazy old man.

While it is apparent that Gilliam puts lots of effort into these and other notable moments in the film, the story, which is written by him and his co-writer Tony Grisoni, frequently loses its focus especially during its messy last act, and there are also several flawed aspects which distracted me a lot during my viewing. While I was bothered by several moments of crude humor including the ones involved with certain ethnic characters, I also noticed how the movie often objectifies most of substantial female characters in the story.

Anyway, the movie is not a total dud as being diligently carried by its two good lead performers. While Driver steadily holds the ground with his earnest performance, Price, whom I have always remembered fondly for his memorable lead performance in “Brazil”, deftly balances his character between humor and poignancy, and the movie works best whenever their characters push or pull each other on the screen.

In conclusion, “The Man Who Killed Don Quixote” is a little too flawed to be recommended, but it is a fascinating misfire to be appreciated at least, and you will probably want to pat on Gilliam’s back regardless of whether you like it or not. Although the overall result is not that satisfying, he finally made it, and we all know that means a lot to him. 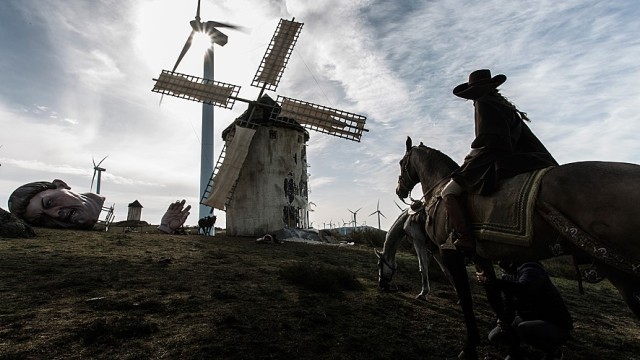 This entry was posted in Movies and tagged Adventure, Fantasy, Filmmaker. Bookmark the permalink.