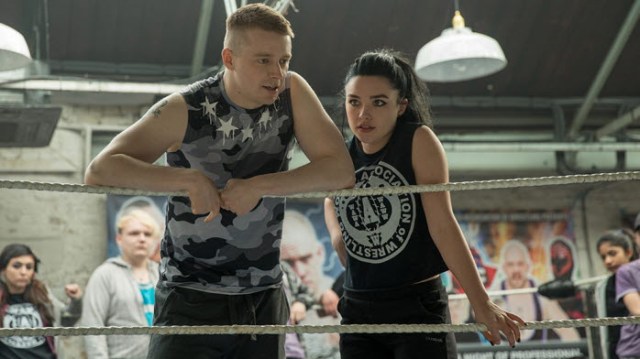 “Fighting with My Family” often made me cringe for good reasons, but I enjoyed its sweet funny moments nonetheless. As the story about a young female wrestler reaching for her dream of joining World Wrestling Entertainment (WWE), the movie gives us plenty of tough physical moments which may make your eyes roll, but it is basically a pleasant mix of comedy and sports drama, and it will make you root for its plucky heroine around the time when it arrives at its expected climactic part along with her.

Loosely based on Max Fisher’s 2012 documentary feature film “The Wrestlers: Fighting with My Family”, the movie revolves around an unexpected opportunity coming to Saraya Knight (Florence Pugh) and her dear family members who have devoted to wresting as much as her. Even when they were very young, she and her older brother Zak (Jack Lowden) knew well how to wrestle thanks to their wrestler parents Patrick (Nick Frost) and Julia (Lena Headey), and they and their parents have often worked together in the ring while also teaching wrestling to local kids including a blind boy who does not mind stepping onto the ring at all as shown from one brief scene.

Although they have been stuck in their Northern England region without any particular advance, Zak and Saraya still dream of being accepted into WWE as they did during their childhood years, so they become quite excited when their efforts for drawing the attention of a WWE trainer named Hutch Morgan (Vince Vaughn) is finally paid off. After seeing their promotional video, Morgan allows them to participate in his tryout to be held before a SmackDown taping at The O2 Arena, and Patrick and Julia are certainly happy and proud to see their children getting a big chance at last.

During the tryout where not only they but also many other young wrestlers come, Saraya and Zak try their best to impress Morgan, and it looks like Zak will be the one who will go to a WWE training camp in Orlando, Florida, but, to their surprise, Morgan picks Saraya instead because he thinks Saraya has the right stuff for WWE. While quite disappointed with the outcome, Zak tells his sister not to throw away this big opportunity handed to her, and Saraya reluctantly grabs her chance while knowing well how much that hurts her older brother.

Once Saraya and other hopeful young wrestlers arrive in Orlando, Morgan relentlessly pushes them into many physically demanding training sessions which surely test their physical limits, and Saraya finds herself often overwhelmed by this arduous process while also feeling isolated in an alien environment surrounding her. Although other female trainees are fairly nice to her, she often conflicts with them, and that accordingly exacerbates her loneliness and frustration.

What follows next will not surprise you much if you are a seasoned moviegoer who have seen many sports drama movies, but the screenplay by director/writer Stephen Merchant deftly handles its conventional story elements as frequently going back and forth between comedy and drama. While the dynamic relationship between Saraya and Zak is depicted with considerable care and sensitivity, their parents and other substantial supporting characters generate some laughs for us through their lively personality, and the movie also brings enough vividness and authenticity to its numerous wrestling scenes. Although it is relatively mild compared to Darren Aronofsky’s “The Wrestler” (2018), there are a number of impactful scenes which will surely make you wince, and I still remember well one particular scene featuring lots of thumbtacks. 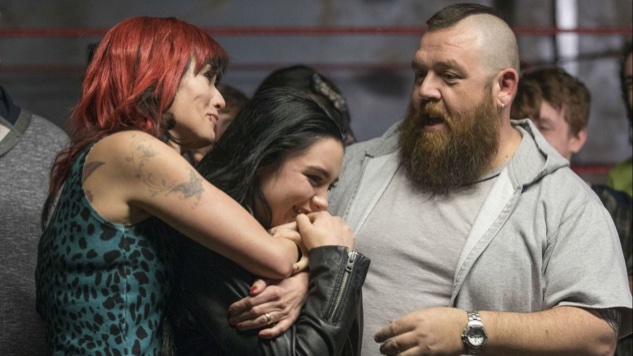 Anyway, the movie maintains well its cheerful spirit well on the whole, and its story eventually culminates to a big finale which mostly works despite some contrived aspects. Maybe because I know how those wrestling matches are usually fixed in advance, I observed this part from the distance, but it is at least effective enough to care about what our heroine will earn in the end after her hard efforts.

In addition, the movie is anchored well by another strong performance from Florence Pugh, a wonderful British actress who drew our attention for the first time with her chilling breakthrough turn in “Lady Macbeth” (2016) and then impressed us further with her electrifying lead performance in Park Chan-wook’s acclaimed BBC TV miniseries “The Little Drummer Girl” in last year. While surprising us with another side of her undeniable talent, Pugh is believable in her character’s gradual development along the story, and her solid comic acting here in this film certainly made me have more expectation on her burgeoning movie acting career, which may be further boosted by Ari Aster’s “Midsommar” (2019) and Greta Gerwig’s “Little Women” (2019) in this year.

In case of the other notable performers in the film, each of them has some juicy moments to shine. While Jack Lowden did a competent job of supporting Pugh during their scenes, Nick Frost, Lena Headey, and Vince Vaughn give colorful supporting performances as required, and Dwayne Johnson, who also participated in the production of the film, has lots of fun with playing himself in a couple of scenes.

Overall, “Fighting with My Family” simply does as much as expected, but it is supported well by the enjoyable acting from its good cast members, and the result is entertaining enough for recommendation. I still do not like wrestling much as your average stiff nerdy guy, but I had a good time with the movie anyway, so I will not grumble for now.