As watching “To Dust”, a little comedy film which won the Narrative Audience Award at the Tribeca Film Festival in last year, I was reminded of that memorable quote from Errol Morris’ great documentary “Gates of Heaven” (1978): “Death is for the living and not for the dead.” While dryly and wryly observing how its two different main characters try to deal with death in a rather morbid way, the movie generates several nice deadpan moments to be savored for a dark sense of humor, and we certainly get some good laughs as also coming to reflect more on its gloomy subject which is undeniably connected to our life in one way or another.

Géza Röhrig, who was utterly unforgettable in Oscar-winning Hungarian film “Son of Saul” (2015), plays Shmuel, a married man living in some Orthodox Jewish neighborhood of New York City. At the beginning, Shmuel’s wife dies because of her sudden illness, and he is clearly devastated by her death even though he does not express much the grief and sadness churning inside him. Once her body is buried, he tries to keep going for his two young sons, but he finds himself still haunted by her death, and he also has a recurring dream of a certain part of her buried body transformed into something else due to its decomposition process.

As a deeply religious man, Shmuel believes that her soul will never depart to afterlife until her body is completely decomposed into dust, and that is how he comes to wonder a lot about how long that process will take. As he becomes more obsessed with that nagging question, he gets determined to get the definite answer, and that eventually leads him to a local community college science teacher named Albert (Matthew Broderick), who is certainly caught off guard when he is approached by Shmuel on one day. 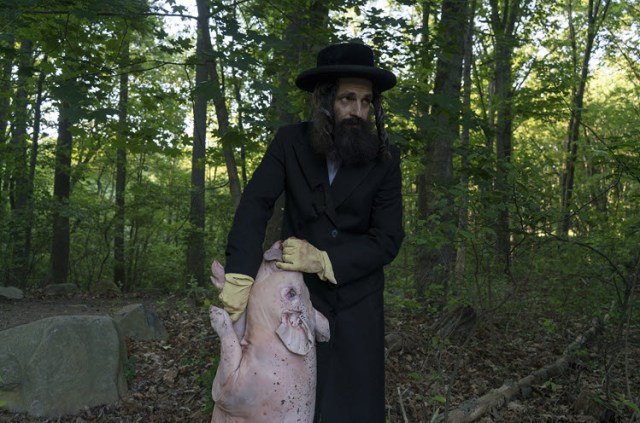 After seeing how serious and desperate Shmuel is in his absurd search for answer, Albert tries to help him as much as he can, and we subsequently get a wry scene where he and Shmuel look into a certain scientific record on the decomposition process of a little dead pig under natural condition. You may cringe as watching a number of brief but unpleasant shots showing that decomposition process step by step, but you will be also reminded of how death is an undeniable fact of life right from the very beginning.

Even after watching that scientific record, Shmuel is not satisfied enough, and the screenplay by director Shawn Snyder and his co-writer Josh Crook gives us a series of humorously naughty moments as Shmuel comes to go further based on what he learned from Albert. At first, he tries to do his own experiment with the carcass of a dead pig, but he is still not that satisfied, so, to Albert’s horror and perplexity, he decides to attempt again with a living pig (As far as I know, no animal was harmed during the production of the film).

As finding himself inadvertently getting involved more with Shmuel, Albert understandably becomes more frustrated and exasperated, but he comes to care much about Shmuel nonetheless, so he comes to help Shmuel more than expected. Besides continuing to help Shmuel’s crude experiment on body decomposition, he later notifies Shmuel of a certain institute which may give Shmuel the answer he has yearned for, and Shmuel is certainly willing to go to that place along with him.

Meanwhile, the movie provides little additional laughs through a few supporting characters around Shmuel. While Shmuel’s old mother constantly urges him to get married again for his two children, Shmuel’s two young sons become more concerned about their father, and they come to believe that their father is haunted by the ghost of their mother and accordingly needs to be exorcised as soon as possible. When they eventually try to do their small ritual of exorcism at one point later in the film, we cannot help but amused by that, but we are also touched a bit by the sincerity behind their rather silly action, and then this moment becomes more dramatically effective than expected.

The movie depends a lot on its two lead performers, who ably complement each other via their contrasting appearance and personality. While looking less glum and intense than before, Röhrig, who once worked a kindergarten teacher and is also an active poet who has already published several Hungarian poetry collections, shows here another side of his unadorned acting talent, and the movie confirms to us that he is indeed an interesting performer to watch. In case of Matthew Broderick, he steadily stands by his co-performer while never overshadowing him at all, and he and Röhrig are effortless in their comic interaction on the screen.

On the whole, “To Dust” may require some patience from you at first due to its slow narrative pacing and somber mood, but it is fairly engaging thanks to its several good aspects besides the enjoyable duo performance from its two lead performers, and I particularly liked how the movie gives us a close look into the insular world of the Orthodox Jewish community in New York City via small cultural details which incidentally reminded of Joshua Z Weinstein’s “Menashe” (2017), another small comedy film set in the same ethnic background. In short, this is a modest but funny and thoughtful comedy film balanced well between humor and pathos, and it will certainly delight and amuse you if you have ever mused on matters of life and death.

This entry was posted in Movies and tagged Comedy, Death, Religion. Bookmark the permalink.