I still remember well when I was going to Urbana-Champaign, Illinois by train during one morning of 2010 April. As the train passed through a number of rural regions of Illinois, my eyes were frequently fixed on roads, plains, and towns shown from the outside, and I could not help but curious about the life and people inside those sights rapidly passing by me.

That brief memory of mine came back to me when I was watching Frederick Wiseman’s new documentary film “Monrovia, Indiana” at the Jeonju International Film Festival during last evening. Although it is set in a different part of US, what is presented in the documentary evoked to me what I observed and felt from those rural regions of Illinois during that brief time, and I found myself more curious and engaged as appreciating a series of plain but memorable human moments in the documentary.

At first, the documentary begins with a number of obligatory shots showing the wide landscapes of Monrovia, a small town located in Indiana. Everything seems quiet and serene on those wide corn fields except the sound of the nature, but then we see several kinds of livestock animals including pigs, and the documentary later gives us a small amusing moment showing a little girl closely watching her daddy handling a pack of pigs.

During a part looking into one of local high schools, there is a scene showing a teacher enthusiastically telling a lot about how basketball has been important in Indiana. While the school has been known well for its prominent basketball team, there is even a gym named after a famous local basketball player who was an alumnus of the school, and that will probably remind you of “Hoosiers” (1986), that beloved basketball movie set in Indiana.

As phlegmatically looking around the streets and buildings of Monrovia, the documentary shows various local business activities in the town. We see how ordered dishes are prepared at a local pizza shop. We see several people getting a haircut at barbershops. We see a big supermarket filled with many different groceries and products. We see a liquor store ready to sell various kinds of booze including beer and wine. And we also see a restaurant bar packed with local customers.

One of the most interesting moments in the documentary comes from a local gun store. As its owner and a customer casually talk about guns and dears to be shot, Wiseman sticks to his objective attitude as usual, and you may come to reflect on this moment a bit regardless of your opinion on gun control, which is unfortunately a sensitive issue in the American society even at present.

In the meantime, we also get some glimpses into how things get done by local administrators. During one long scene, we observe their heated debate on a construction project, and there is an amusing moment when one of them comes to use a certain word which sounds rather uncomfortable mainly thanks to the 2016 US Presidential Election. During a similar scene which later appears in the documentary, the local administrators try to handle the protest from a local resident, and we can sense considerable tension even though the camera simply observes them from the distance. 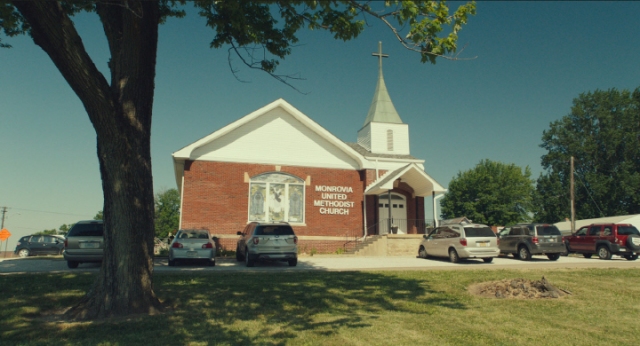 The narrative flow of the documentary often seems aimless as it slowly moves from one moment to another, but we come to feel its subtle but steady build-up process under the surface thanks to Wiseman’s calm, thoughtful direction. As a number of certain places in the town are shown more than once, we become more immersed into the rhythm of daily life in Monrovia, and we eventually come to discern a big, vivid tapestry of its life and people as intended by Wiseman. While we surely get numerous beautiful moments showing the wide landscapes of Monrovia, the documentary also looks closely at the people of Monrovia from time to time, and you may notice how several scenes showing old people and their mundane conversations are subtly connected with two closing scenes of the documentary, which will certainly linger on your mind for a while.

As my mind actively was processing what was presented in the documentary, I was also reminded of how I got to know about Wiseman’s long career and legendary status. After encountering “Crazy Horse” (2011) around 7 years ago, I watched not only his debut film “Titicut Follies” (1967) but also his several recent works such as “At Berkeley” (2013) and “National Gallery” (2014), and that was more than enough for me to see that he is indeed one of the great American documentary filmmakers. While “Titicut Follies”, which looked into the Massachusetts Correctional Institution and its mentally disturbed inmates, does not lose any of its harrowing power even at present, “At Berkeley”, “National Gallery”, and “Ex Libris: The New York Public Library” (2015) showed me an active craftsman still at the peak of his mastery, and I was certainly glad when he received an Honorary Oscar in 2016.

Although it requires considerable patience like many of Wiseman’s other works, “Monrovia, Indiana” is still a rewarding experience on the whole, and I was impressed a lot by how effortlessly it induces curiosity and interest from the beginning to the end. In short, this is another sublime work from Wiseman, and you will not be disappointed if, like me, you admire his career and achievement during last 52 years.

This entry was posted in Movies and tagged Documentary, Indiana, Town. Bookmark the permalink.