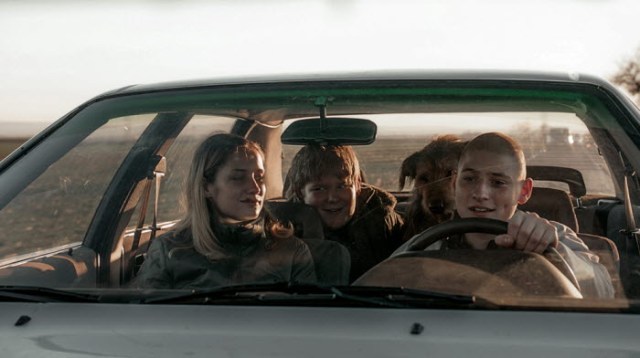 “Winter Flies”, which was selected Czech’s official submission to the Best Foreign Language Film at the 91th Academy Awards in last year and recently happened to be shown at the Jeonju International Film Festival in this month, is a modest but undeniably charming mix of road movie and coming-of-age comedy drama. While I already heard some good words before watching it yesterday, the movie turned out to be more likable and enjoyable than I thought, and I felt considerably refreshed when the light was turned on in the screening room after the movie was over.

During the opening scene, we see how two adolescent male heroes of the movie happen to hit the road together on one cold winter day. When he is doing a shooting game alone at a remote spot near a road while wearing a military outfit for camouflage, Heduš (Jan František Uher), a chubby awkward boy who dreams of joining the French Foreign Legion someday, comes across his friend Mára (Tomáš Mrvík), who is driving a stolen car along the road. Mainly because he is as eager to get away from their neighborhood as his friend, Heduš gladly joins Mára without hesitation, and that is the beginning of their journey.

As Mára and Heduš drive along roads without getting caught by the police, the movie accordingly gives us a series of small funny moments. We chuckle a bit when they make a fun of some guy with a shaggy dog whom they happen to encounter at one point, but then we are caught off guard by a rather nasty moment of animal cruelty, and we are amused and relieved when that dog comes to accompany Mára and Heduš in the end.

Of course, things do not go that well for our two naughty boys. There is a hilarious moment involved with a sleeping bag they have to share, and then there later comes another moment for good laughs when she tries to have a little private time with a man inside a cabin while Mára and Heduš are peeping on them outside the cabin. Although nothing much is revealed about her character, Eliška Křenková brings considerable life and personality to her character at least, and her presence certainly lingers around a subsequent scene where Mára and Heduš take care of their biological urge alone with a certain object belonging to her.

These and other several episodes in the film are intercut with a number of scenes showing Mára being held by two police officers in some local town. Although he looks determined not to tell anything, they are ready to goad and cajole him for having him divulge his name and a few other things. As spending time more with him, one of these police officers, who seems to be a jaded woman who has seen it all, shows some compassion to him, but that does not mean that she will always tolerate his brash and impertinent attitude, and she does not even hesitate to use a manipulative tactic for getting what she wants from Mára.

As the screenplay by Petr Pýcha keeps going back and forth between its two different time points, the movie steadily maintains its offbeat mix of melancholy and cheerfulness. The wintry atmosphere of the film is established well on the screen along with the sense of loneliness cinematographer Lukáš Milota, and I particularly like a brief but hauntingly poetic surreal scene showing Mára and Heduš’s car being driven by itself along the road. The score by Simon Holy, Monika Midriaková, and Pawel Szamburski lightens up the mood whenever our two naughty boys get themselves into another happening, and one of its most prominent moment comes from when Heduš shows more resourcefulness than expected later in the story.

As the center of the movie, Tomáš Mrvík and Jan František Uher, young non-professional actors who never acted before being cast for the movie, effectively complement each other with their characters’ different appearances and personalities. While Mrvík is especially terrific during a key dramatic scene showing his character’s aching vulnerability, Uher is equally convincing in his part, and their effortless interaction on the screen is always amusing and engaging to watch. Besides Křenková, a few other substantial performers in the film also hold their own small place well around Mrvík and Uher, and Lenka Vlasáková is wonderful as her police officer character tries to maintain her tactful no-nonsense attitude despite her increasing impatience with Mára.

“Winter Flies” is the third feature film of director Olmo Omerzu, who previously made “A Night Too Young” (2012) and “Family Film” (2015). I have not watched these two films of his yet, but, based on what I observed from “Winter Flies”, I can tell you at least that Omerzu is another talented filmmaker to watch, and it will be interesting to see where his growing filmmaking career will go during next several years. In short, this is one of better films I saw during this year, and I think you should check it out as soon possible. 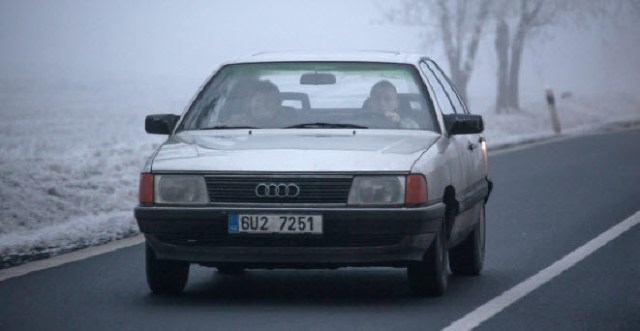 This entry was posted in Movies and tagged Adolescence, Coming-of-age drama, Journey. Bookmark the permalink.