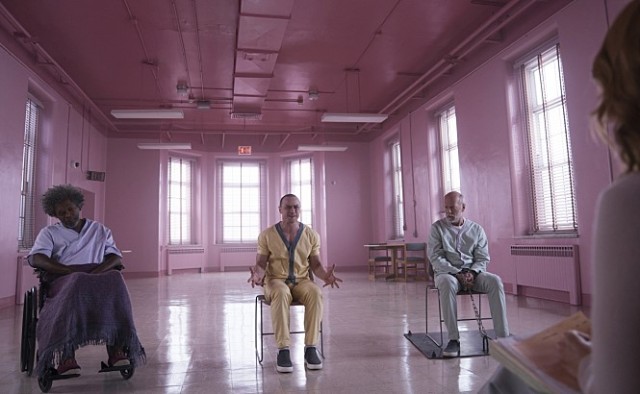 “Glass”, which is supposed to be the concluding chapter for director/writer M. Night Shyamalan’s “Unbreakable” (2000) and “Split” (2016), is a decidedly lukewarm superhero movie which is fascinating enough to talk about but is not good enough to recommend. Although it has some interesting self-conscious touches to amuse us to some degree, it is still disappointing due to a number of weak aspects including its rather deficient storytelling, and I often found myself distracted and frustrated during my viewing even while entertained by its good parts.

The movie starts at the point not long after what happened at the end of “Split”. Kevin Wendell Crumb (James McAvoy), a seriously disturbed young man with dissociative identity disorder who also occasionally shows superhuman strength as his super-id identity ‘The Beast’, has been still on the loose in Philadelphia, and it looks like nobody can prevent him from continuing his deranged criminal act of kidnapping and mutilating young women, but there already comes an opponent who may stop him: David Dunn (Bruce Willis), the hero of “Unbreakable” who has secretly operated as ‘The Overseer’ for last 19 years since he became aware of his extraordinary abilities.

With the help and assistance from his son Joseph (Spencer Treat Clark), Dunn has patiently searched for where Crumb has been hiding, and he eventually discovers Crumb’s hideout and then confronts him, but they are suddenly ambushed by the Philadelphia Police and Dr. Ellie Staple (Sarah Paulson), who promptly sends Crumb and Dunn to a local institution for mental illness once she and the police suppress Crumb and Dunn. In her opinion, Crumb and Dunn are simply no more than patients having the delusion of being comic book characters, and she looks confident about taking care of their delusion problem within a few days.

Incidentally, there is another patient in the institution who interests Dr. Staple as much as Crumb and Dunn, and he is Elijah Price (Samuel L. Jackson), who is also known as ‘Mr. Glass’. If you have watched “Unbreakable”, you will certainly remember that Price is a dangerous criminal mastermind who caused a series of massive accidents just for finding people like Dunn and Crumb, but Dr. Staple does not worry much about Price as he has been heavily sedated for years while also locked in his cell with maximum surveillance system. 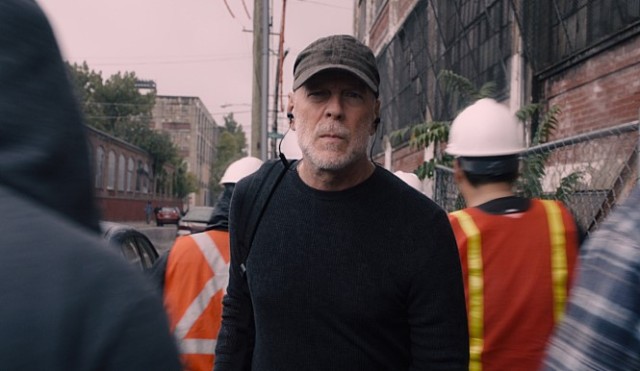 There subsequently comes a long scene where Dunn meets not only Crumb but also Price under Dr. Staple’s supervision, and that is surely one of a few high points of the film. James McAvoy is certainly having a big fun here as he previously did in “Split”, and, not so surprisingly, he cannot help but dominate the scene over his co-performers while gleefully switching amid his character’s multiple personalities.

In the meantime, the movie also pays some attention to several other characters in the story. While Mrs. Price (Charlayne Woodard), who is Price’s mother, still regards her son with same care despite his horrible crimes, Casey Cooke (Anya Taylor-Joy), the girl who survived at the end of “Split”, decides to meet Crumb again, and, after their re-encounter at the institution, she subsequently becomes more interested in whatever has been implied in comic books and superhero characters. In case of Joseph, he tries to find any possible way to help his father, and then he happens to discover something which is going to be revealed later in the story.

I will not go into details here not for spoiling anything, but I can tell you instead that it gradually turns out that Price has been carefully planning for a big moment he has been waiting for many years. Things get more interesting once he embarks on executing his plan, and it is not much of a spoiler to tell you that there will be an eventual confrontation among Price, Crumb, and Dunn. 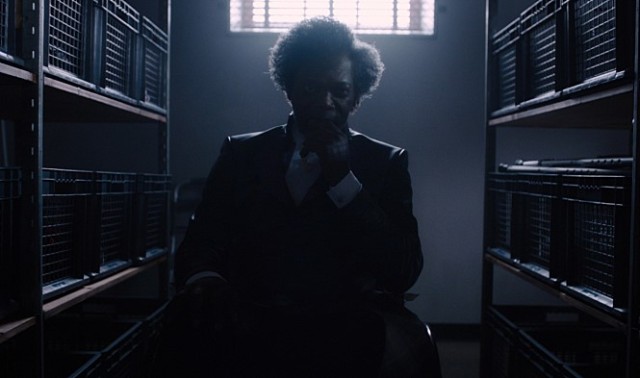 Interestingly, the movie defies our expectation in terms of story and characters, and I sort of enjoyed how it deliberately maintains its phlegmatic storytelling approach even during its climactic part which is notably far less explosive than what we have observed from other blockbuster superhero movies during recent years, but Shyamalan’s screenplay somehow fails to meld its different story elements into something coherent. As often hampered by its thin characterization and disjointed narrative, it does not succeed much in making us care about its story and characters, and some of its plot twists are too contrived to say the least.

Furthermore, the main cast members of the movie besides McAvoy seem to be merely filling their respective roles on the whole. While Samuel L. Jackson has some chance to chew his several scenes later in the movie, Bruce Willis does less acting here than he briefly did in “The Lego Movie 2: The Second Part” (2019), and Sarah Paulson is as under-utilized as other substantial supporting performers in the film including Spencer Treat Clark, Charlayne Woodard, and Anya Taylor-Joy.

Although it is not the worst film in Shyamalan’s uneven career which gave us not only “Unbreakable” and “Signs” (2002) but also “The Last Airbender” (2010) and “After Earth” (2013), “Glass” is still a letdown compared with his recent solid comeback shown from “The Visit” (2015) and “Split”. I am left with disappointment now, but, considering its modest success in the US box office early in this year, Shyamalan will surely move on as before, and I can only hope for something more satisfying than this middling piece of work. 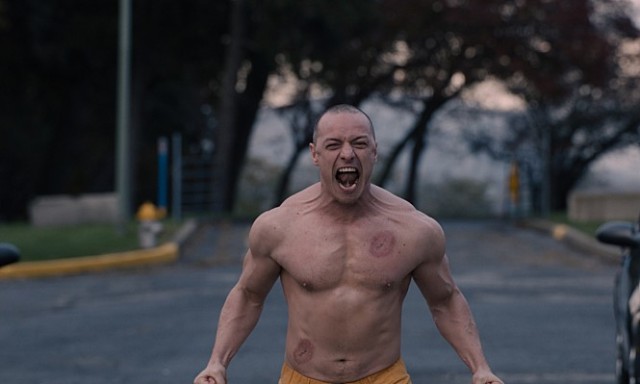 This entry was posted in Movies and tagged Superhero, Thriller. Bookmark the permalink.