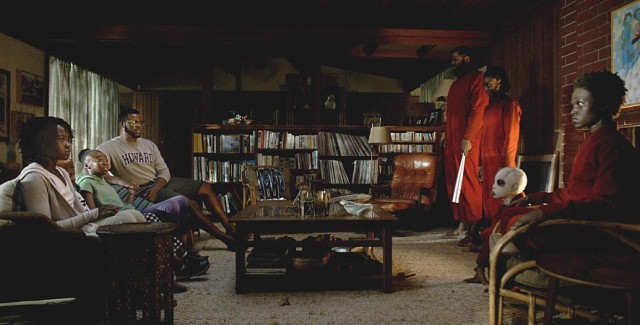 “Us”, the second feature film from Jordan Peele, is a wry and creepy horror tale packed with striking moments you will not easily forget. While it often tests our suspension of disbelief as going further and further with its decidedly unrealistic story premise which is not so far from those classic episodes of TV series “The Twilight Zone”, it is also quite entertaining as deftly balancing itself between stark surrealistic horror and a naughty sense of humor, and the overall result is one of the most impressive genre films of this year.

After the insidious opening sequence set in the beach area of Santa Cruz, California during one summer evening of 1986, the movie moves forward to the present, and then we are introduced to Adelaide (Lupita Nyong’o) and her affluent middle-class African American family. They are going to spend several days at their summer house located near Santa Cruz, and everything looks all right on the surface, but Adelaide cannot help but nervous when she and her family later go to that beach area of Santa Cruz. As already shown to us during the opening sequence, young Adelaide experienced something quite unnerving there when she happened to be separated from her parents for a while, and she finds herself still haunted by that unpleasant experience in the past as arriving at the beach along with her family.

While her husband Gabe (Winston Duke) and her two children Zora (Shahadi Wright Joseph) and Jason (Evan Alex) are having a good time on the beach, Adelaide’s bad feeling only gets increased with a few small but disturbing signs including the very place where that incident happened to her, which remains somehow intact even after more than 30 years. When her young son Jason later happens to be out of his mother’s sight, the mood becomes a little more ominous than before, and, not so surprisingly, he soon comes to encounter a mysterious figure standing alone at the corner of the beach. 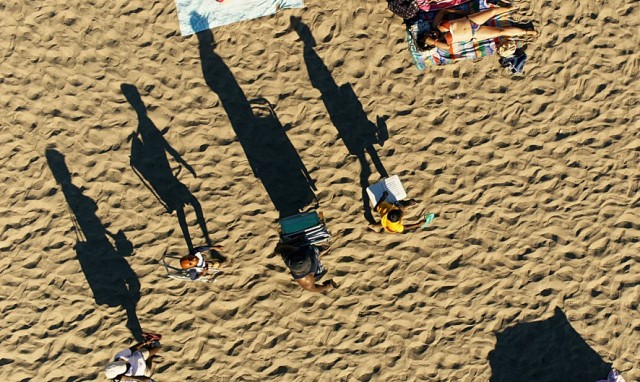 Anyway, Jason returns safely when his mother is frantically looking for him, and Adelaide and her family go back to their summer house in the evening, but she feels nervous again when she sees her son’s latest drawing, which is based on his encounter with that mysterious figure. Gabe tries to calm her down, but she still feels agitated, and whatever she fears seems to manifest itself when the electricity line of the house is suddenly cut off.

As it becomes quite apparent that their doppelgängers come upon them with a certain malicious purpose, Adelaide and her family are driven into an increasingly perilous situation, and the movie accordingly gives us a series of intense scenes peppered with suspense and violence while occasionally throwing some darkly humorous moments. In case of a tense moment involved with Gabe’s used motorboat, it will definitely make you both cringe and amused for a good reason at one point, and we later get an absurdly horrific sequence featuring a certain notorious classic rap song.

During its third act, Peele’s screenplay becomes a little shaky while leaving numerous gaps and holes in its premise, and what will be revealed during that part may feel a bit too preposterous to some of you, but the movie still keeps holding our attention under Peele’s skillful direction as continuing to maintain the sense of dread over its main characters. Although it may be rather vague about what exactly it is about, the movie is still fascinating to watch in terms of mood and storytelling, and it surely strikes us hard when it finally arrives at its inevitable ending.

The movie depends a lot on its four main cast members, who are all convincing in their respective dual roles. In what may be her best performance since her Oscar-winning supporting turn in “12 Years a Slave” (2013), Lupita Nyong’o is simply fabulous as ably going back and forth between her two different characters, and she is especially wonderful during a certain scene which is presented like a brutal and vicious ballet between Adelaide and her doppelgänger. While Winston Duke, who recently became more prominent thanks to his notable supporting turn in “Black Panther” (2018), is entertaining in his nuanced performance balanced well between humor and terror, Shahadi Wright Joseph and Evan Alex hold their own places around Nyong’o and Duke, and the same thing can be said about Elizabeth Moth and Tim Heidecker, who have a little juicy fun with their substantial supporting roles.

Although it is not as precise and incisive as Peele’s Oscar-winning debut feature film “Get Out” (2017), “Us” is a commendable genre piece on the whole, and I admired a lot his deft handling of mood, story, and characters here in this film. I do not know whether it will be as iconic as “Get Out”, but, like “Get Out”, it functions as a morbid but compelling funhouse mirror to whatever has been hidden under the consciousness of the American society, and it also definitely confirms to us that Peele is a talented filmmaker willing to take risks for his artistic vision. While reminiscent of the works of various filmmakers ranging from Alfred Hitchcock to M. Night Shyamalan, his first two films look distinctive with his own style and touches, and I will certainly have some expectation on whatever may come next from him.

This entry was posted in Movies and tagged Doppelganger, Horror. Bookmark the permalink.