Before watching “Kursk”, you have to know in advance what it is about. In 2000, a Russian nuclear submarine named Kursk sank to the bottom of the Barents Sea due to an unfortunate explosion accident, and most of its crew instantly died when that accident happened. While 23 crew members managed to survive at that moment, but, as some of you may remember, they were not rescued in time due to the incompetent handling of the situation by the Russian Navy and government, and it was too late for all of them when President Vladimir Putin finally authorized to accept British and Norwegian offers of assistance.

Besides realistically presenting how things went wrong during and after this devastating incident, the movie also attempts to give us a sincere, respectful human drama, but it fails to engage us due to its rather superficial storytelling and thin characterization. While it is understandably quite dour and depressing at times, the movie does not generate enough narrative momentum or human interest for holding our attention, and we only come to watch its story and characters from the distance without much emotional investment.

In the early part of the movie, which is presented in the screen ratio of 1.66:1, we are introduced to a bunch of crew members of the Kursk including Captain-lieutenant Mikhail Averi (Matthias Schoenaerts). After the opening scene showing Mikhail’s happy family time with his pregnant wife Tanva (Léa Seydoux) and their young son Misha (Artemiy Spiridonov), we see Mikhail and his comrades hurriedly preparing for the upcoming wedding of one of them, and there is a little amusing moment showing them collecting money together and then trying to buy enough food and booze for the wedding party as soon as possible. 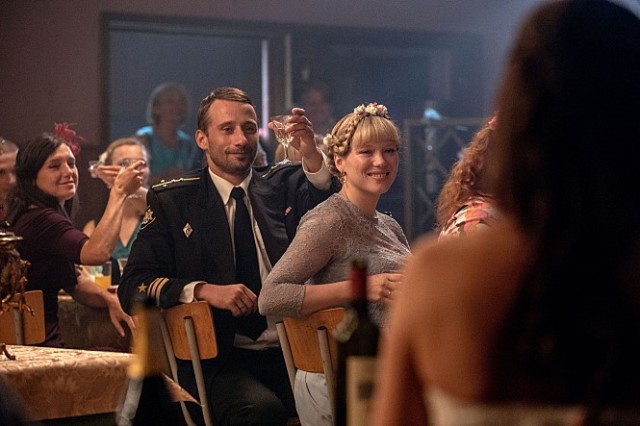 Anyway, they all come to have a pretty good time at the wedding party while joyfully congratulating the groom, and we subsequently see them getting on their nuclear submarine and then getting ready for the upcoming naval exercise. Now shown in the screen ratio of 2.35:1, the movie gives us a number of nice wide shots showing a group of Russian Naval ships commanded by Admiral Vyacheslav Grudzinsky (Peter Simonischek), and we also get some fluid moments as cinematographer Anthony Dod Mantle’s camera smoothly moves around the crew members of the Kursk.

While everything seems to be going well in the Kursk at first, a small but alarming thing occurs in one of the compartments containing torpedoes at one point, and, mainly thanks to the negligence of its commander, that happening eventually escalates to a big explosion which is then followed by another one. Quite damaged as a result, the Kursk crashes down to the bottom of the Barents Sea, but Mikhail and several other crew members around him luckily survive mainly because of being far from the explosion site.

Once they perceive their current emergency circumstance, Mikhail and other surviving crew members try to stay alive as long as they can while waiting for the rescue by the Russian Navy, but the Russian Navy turns out to be quite unprepared for the rescue mission. For instance, it has only three salvage vehicles, but two of them are unavailable at present, and the remaining one turns out to have a serious mechanical problem when it later attempts a docking onto the Kursk. 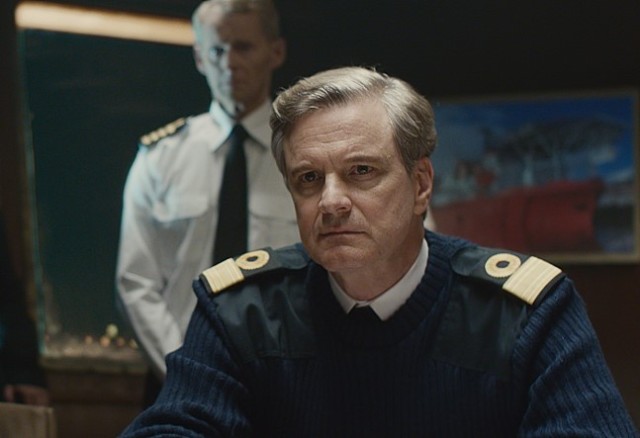 As Admiral Grudzinsky gets frustrated more and more about this problematic situation, the British Navy, which is mainly represented here in the film by David Russell (Colin Firth), is willing to provide its salvage vehicle, but the Russian Navy and government refuse that in the name of nation pride and security. Even while their salvage vehicle fails again and again in its docking attempt, they falsely maintain in public that everything is under control, and that surely exasperates the concerned families of the crew members of the Kursk.

As juggling its several plotlines, the screenplay by Robert Rodat, which is based on Robert Moore’s nonfiction novel “A Time to Die”, tries to draw a big picture showing the complex situation surrounding the Kursk submarine disaster, but it is rather underwhelming in terms of story and characters. While most of its main characters are more or less than broad archetypes without enough human quality, the story comes to lose more of its narrative pacing especially as it approaches to its inevitable finale, and the following epilogue scene, where the movie goes back to the screen ratio of 1.66:1, does not feel that impactful on the whole.

In case of the main performers in the film, they try as much as they can do for filling their respective roles. While Matthias Schoenaerts diligently handles his part, Léa Seydoux manages to leave some impression despite her thankless role, and the same thing can be said about the other notable performers in the film including Colin Firth, Michael Nyqvist, Peter Simonischek, August Diehl, and Max von Sydow.

While it is competent on the technical level, “Kursk” does not impress me much on the emotional level, and it is a minor disappointment compared to director Thomas Vinterberg’s previous works such as “The Hunt” (2012) and “Far From the Madding Crowd” (2015). To be frank with you, these two films are better works in my inconsequential opinion, and I assure you that you can have a better time with either of them.

This entry was posted in Movies and tagged Real-life incident, Real-life story, Submarine. Bookmark the permalink.