South Korean film “MAL-MO-E: The Secret Mission” bored and depressed me. Although I was a little interested at first due to its important historical subject, I was quite disappointed as watching its trite and blatant attempt to squeeze laughs and tears from us as much as it can during its 135-minute running time, and what is shown at the end of the movie only reminded me of the possibility of a more interesting film from its historical subject.

Set in Korea, 1941, the story of the movie is mainly told via the viewpoint of Kim Pan-soo (Yoo Hae-jin), a seedy ex-con who has tried to support him and his two children by any means necessary. When we see him for the first time, he is working at a local movie theater in Gyeongseong (It is the old name of Seoul, by the way), but it soon turns out that he is doing a little criminal activity for getting some extra cash, and he is promptly fired when he gets exposed in the end.

Mainly because his adolescent son needs to pay his school tuition as soon as possible, Pan-soo must find any possible way to earn money quickly, and that is how he comes across Ryoo Jeong-hwan (Yonn Kye-Sang), a Korean language expert who has tried to preserve Korean language along with his several colleagues for many years despite the increasing oppression from the Japanese government. Their first encounter is not exactly pleasant to say the least, but Pan-soo comes to work for Jeong-hwan and his colleagues just because of their mutual acquaintance, and he is certainly glad to get an opportunity of getting paid as well as he hopes.

As an illiterate, Pan-soo initially does not care much about what Jeong-hwan and his colleagues are trying to do for the language of his country, but he has no choice but to study how to write and read Korean bit by bit when Jeong-hwan demands that as one of several conditions for employment. He is not a very good student, but, what do you know, he makes considerable progress as gaining more trust from Jeong-hwan and his colleagues, and the movie later gives us an amusing moment when Pan-soo happens to read one of the most notable Korean short stories in the 1920s.

In the meantime, their harsh reality comes to threaten them more than ever. After it occupied Korea in 1910, the Japanese government consistently tried to suppress and eradicate the Korean culture, and, as shown from the movie, this vile policy on Korea reached to its highpoint as Japan entered the World War II in 1941. While trying to stamp out the Korean Independence Movement as severely as before, the Japanese government forbade any Korean cultural activity in public, and it even prohibited Korean language in addition to forcing millions of Korean people to change their Korean names into Japanese ones.

Even while very frustrated to see that many of prominent Korean public figures bend under this brutal oppression from the Japanese government, Jeong-hwan and his colleagues try to finish their big project still in progress. They are going to publish the first official Korean dictionary, and they must complete collecting various local dialects around the country before establishing the standard Korean language with a bunch of other Korean language scholars. As assisting Jeong-hwan and his colleagues’ hard struggle, Pan-soo finds himself becoming more active and serious than before, and he even thinks of a clever way to help Jeong-hwan and his colleagues when they must collect those many Korean dialects within a short time. 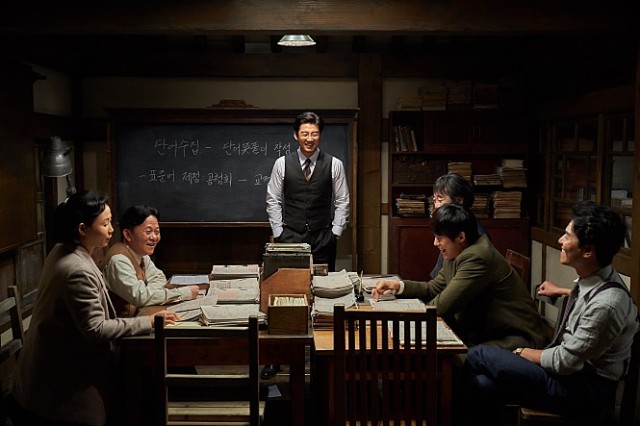 When the Japanese government corners Jeong-hwan and his colleagues more and more, the movie tries to increase dramatic tension, but the screenplay by director/writer Eom Yoo-na, who previously wrote the screenplay for “A Taxi Driver” (2017), frequently stumbles due to its poor storytelling. While most of characters in the film are more or less than cardboard caricatures without much human depth or interest, the story is often quite jarring in its contrived mix of silly comedy and heavy-handed melodrama, and it also seriously suffers from its uneven narrative pacing especially during its second half. Dragging from one predictable narrative point to another, it tries to push us too hard into numerous moments of anger and sadness, and its finale is overlong and ponderous with the obligatory epilogue dripping with cheap sentimentality.

The main performers in the film try to fill their respective roles as much as they can, but they do not have much to do from the beginning. While Yoo Hae-jin and Yoon Kye-sang, who previously appeared together in “Minority Opinion” (2013), are good actors, they are mostly wasted in their mediocre stereotype roles, and the same thing can be said about other notable performers in the film including Kim Hong-pa, Woo Hyun, Kim Tae-hoon, Kim Sun-young, Heo Sung-tae and Song Young-chang.

Overall, “MAL-MO-E: The Secret Mission” fails to provide good story and characters to engage us, and it did not even meet my rather low expectation. When I watched its trailer, I clearly saw that it wanted to make us laugh and cry, and I was willing to assess it as fairly as I could, but it was worse than expected, and I walked out of the screening room without much satisfaction in the end. Sure, the movie made me reflect a bit on those real-life figures who bravely tried to preserve the language of my country during that dark, desperate time, but I also think they deserve something better than this hokey piece of work. 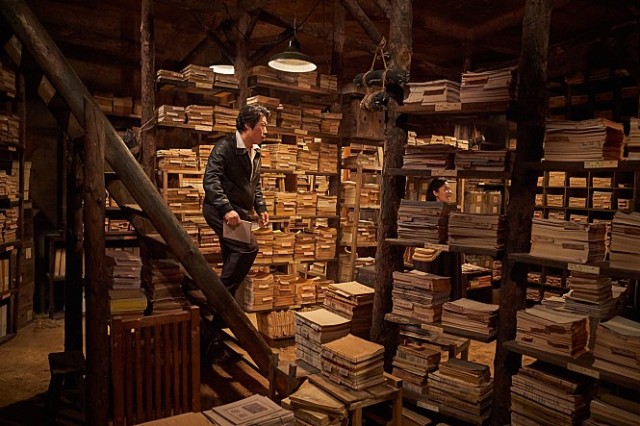