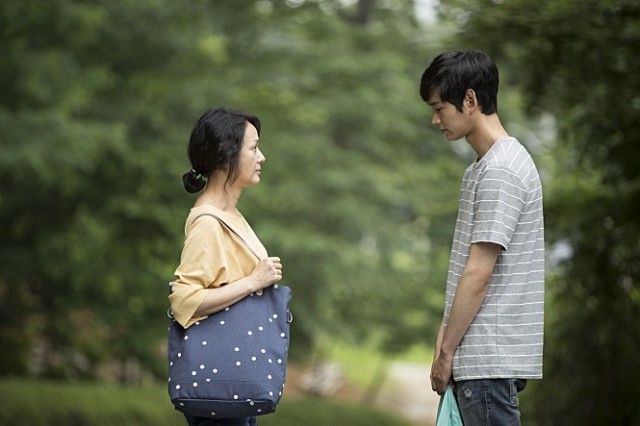 South Korean “In Between Seasons” is a mild but sensitive drama which respects and cares about its two main characters who have been close to each other but then suddenly come to confront an invisible gap between them. As carefully establishing an awkward human circumstance surrounding them, the movie lets us understand and emphasize with their respective emotional struggles, and it is often quietly poignant as they tentatively approach closer to each other with honesty and acceptance.

After the opening scene which shows the aftermath of a car accident which results in the comatose state of Soo-hyeon (Ji Yoon-ho), the movie shows how his close friend Yong-joon (Lee Won-geun) came into the life of Mi-kyeong (Bae Jong-ok), Soo-hyeon’s mother who has raised her son alone for years as her husband is usually absent due to his work in Philippine. When Soo-hyeon introduced Yong-joon to her four years ago, Mi-kyeong was glad to see that her lonely adolescent son came to have a friend to hang around with, and she soon found herself becoming a sort of mother figure to Yong-joon after learning of a few things about his unhappy childhood including his mother’s suicide. 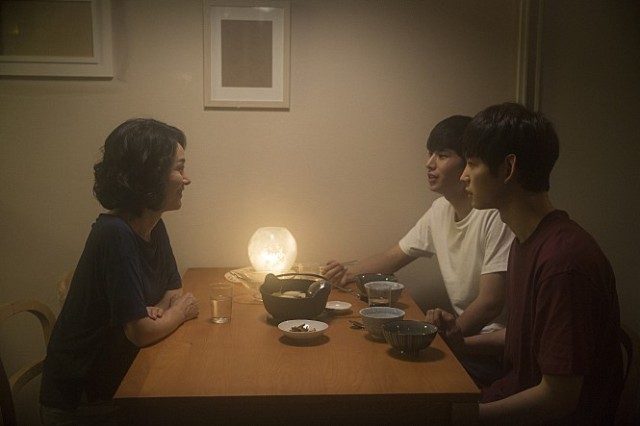 And it is gradually revealed to us that Soo-hyeon and Yong-joon have been romantically involved with each other right from the beginning. While not telling anything to Mi-kyeong, they spent their own private time together from time to time, and we come to learn later that the aforementioned accident happened during their another private time.

While patiently waiting for his son to regain his consciousness at a hospital, Mi-kyeong happens to check out her son’s camera which was handed to her along with his other possessions, and then she finally comes to realize what has been going on between her son and Yong-joon. When Yong-joon, who has been recuperating in the same hospital, drops by Soo-hyeon’s hospital room, Mi-kyeong understandably does not welcome Yong-joon much, and then she comes to put more distance between her and Yong-joon. At one point, she flatly asks him not to come to see her and her son again, and she subsequently moves her son to a facility located in some remote rural area.

Now this looks like your average melodramatic setting, but the movie wisely goes for quiet intimate drama instead of resorting to sappy sentimentalism or overwrought melodrama. As both Mi-kyeong and Yong-joon try to handle each own emotional pain and confusion, the movie steadily brings more depth to their respective relationships with Soo-hyeon via a number of flashback scenes, and we get to know more about how much Soo-hyeon and Yong-joon have loved each other – and how much Soo-hyeon has meant to his mother.

Eventually, Yong-joon comes to locate where Soo-hyeon has been taken care of by his mother, and Mi-kyeong does not block him much even though she still feels angry and confused about her son’s relationship with Yong-joon. She lets Yong-joon stay in the facility, and she becomes a little more relieved than before as Yong-joon willingly helps her taking care of her son.

Even during one particular scene where Mi-kyeong comes to let out her frustration and exasperation in front of Yong-joon, the movie keeps maintaining its low-key tone, and it continues to engage us with small nuanced moments to observe. When Yong-joon and his older brother have a private talk at one point, we come to gather that Yong-joon’s brother knows about Yong-joon’s homosexuality even though neither of them talks directly about that. In case of a few scenes between Mi-kyeong and her estranged husband, these scenes are imbued with silent but palpable bitterness, and we later get a brief amusing moment when they officially terminate their superficial marriage.

“In Between Seasons” is the first feature film by director/writer Lee Dong-eun, who subsequently made “Mothers” (2017). Through these two solid works which were incidentally released in South Korea early in this year, he demonstrates that he is a competent filmmaker who is also a good storyteller, and I think he is another promising South Korean movie director to watch. Although the movie is not entirely without weak points (a subplot involved with Yong-joon’s co-worker feels rather unnecessary, for example) and it could have felt much fresher if it had come out around 10 years ago, there are still several strong elements including the good performances of its three main cast members, and the overall result is engaging enough for me to care about its story and characters. Yes, the ending may be a bit too inconclusive, but we get to know a lot about its two main characters’ complex human relationships as watching their close but separate emotional journeys, and that is a satisfying experience in my inconsequential opinion.

This entry was posted in Movies and tagged Homosexuality, Mother and Son, South Korean Film. Bookmark the permalink.