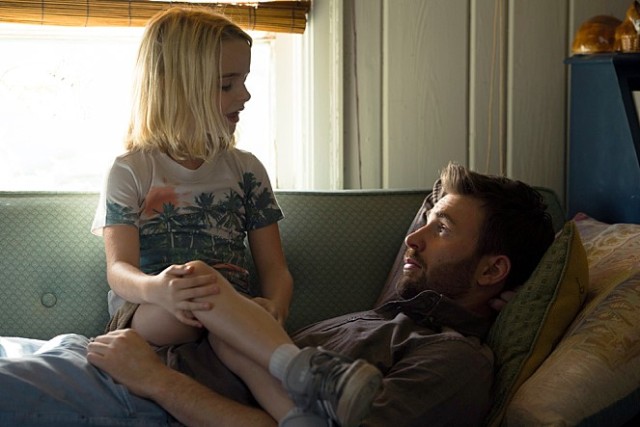 As a conventional family melodrama which clearly wants to pull your heartstrings, “Gifted” does not bring anything new to its genre territory, but it did its job better than expected. While maintaining its balance mostly well between two conflicting opinions on what is the best for its prodigy heroine, the movie works as a sincere and engaging drama to entertain and touch us, and I had a fairly good time with it even while noticing its several weak aspects including its contrived final act.

The movie begins with the first school day of Mary Adler (McKenna Grace), a young girl who has lived with her uncle Frank (Chris Evans) since she was born several years ago. As a pretty smart girl who not only has a prodigious talent in mathematics but also has learned many things from her uncle, she is not particularly interested in going to school, but Frank believes his niece must go to the school for having a normal childhood life as his sister wished before her early death. Sure, he has nurtured his niece’s academic interest for several years as shown from a number of advanced mathematics textbooks in their house, but he also does not want to see Mary letting herself and her life driven too much by her academic interest. As told to us later in the story, that was exactly what happened to Mary’s mother, who was almost close to the solution for one of the most notorious mathematical problems before her death.

Anyway, Mary instantly comes to draw attention from her classmates and her teacher Miss Stevenson (Jenny Slate) while confidently showing off her mathematical talent in the classroom. As the principal of her school later suggests to Frank during their private meeting, it may be the best for Mary to be sent to a special school for mathematical prodigies like her, but Frank remains adamant about keeping her in the school – even after one serious trouble resulted from her rather aggressive reaction to a school bully.

However, the situation soon becomes more complicated as Frank’s estranged mother Evelyn (Lindsay Duncan) enters the picture. As a former mathematician who pushed her daughter’s academic interest as much as she could, Evelyn is surely determined to make Mary follow her mother’s footsteps, and she does not hide her intention at all when she comes to see her son and her granddaughter. Through legal procedures, she is going to take Mary away from Frank, and that is certainly the last thing Mary and Frank want.

The following part of the movie is not so far from “Kramer vs. Kramer” (1979) and other similar family melodrama films. As Frank’s lawyer and Evelyn’s lawyer try their best for their respective clients, the mood naturally becomes bitter as the respective flaws of Frank and Evelyn are inevitably magnified during the trial, but the movie also lets us see that both Frank and Evelyn have each own good point on what is the best for Mary. While we surely come to agree more to Frank’s argument, we also come to understand Evelyn’s sincere wish to develop further her granddaughter’s precious talent, though that wish of hers happens to be intertwined with her own academic ambition and enthusiasm.

Meanwhile, the movie also focuses on Mary’s thoughts and feelings under this difficult circumstance. When she goes to Boston along with her grandmother, she is delighted to learn more about her mother as well as her grandmother, and she is also quite excited to demonstrate her talent in front of Evelyn and her colleague, but she still wants to be with her uncle, who knows and understands her better than anyone except Roberta (Octavia Spencer), a middle-aged woman who is their close neighbor. When Mary becomes quite sad and depressed to learn that her biological father never cared about her from the beginning, Frank takes her to a certain place for making her feel a bit better, and that is the most touching moment in the film.

During its final act, the screenplay by Tom Flynn pushes its main characters into a simplified melodramatic situation, and that is the major weak point of the film. At least, this rather flawed part is supported well by the strong emotional base established well during the first two acts, and the finale works on the whole although it is a little too artificial in my trivial opinion.

The main performers in the movie bring considerable life and personality to their respective characters. While Chris Evans shows again that he is an engaging actor who can do a lot more than Captain America, young newcomer McKenna Grace is simply wonderful as balancing herself well between innocence and precociousness, and she and Evans are effortless as ably conveying to us a strong emotional bond between their characters. In case of several notable supporting performers surrounding them, Jenny Slate utilizes well her natural charm which is previously shown well in “Obvious Child” (2014), and Octavia Spencer and Lindsay Duncan are also solid in their supporting roles.

“Gifted”, which was released as “Amazing Mary” here in South Korea, is directed by Marc Webb, who previously made “(500) Days of Summer” (2009), one of the best romantic comedy films during the 2000s. Although “Gifted” is less special in comparison, Webb handles well its story and character under his good direction, and the result is mostly satisfying with several nice moments of genuine emotions. It is a familiar stuff indeed, but it is a well-made one coupled with good performances to watch, and I am fine with that.

This entry was posted in Movies and tagged Custody, Mathematics, Prodigy. Bookmark the permalink.