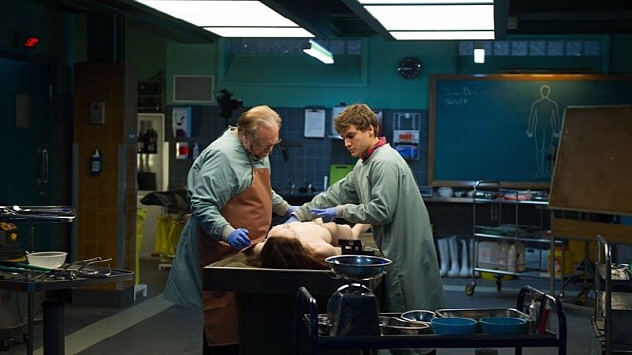 “The Autopsy of Jane Doe” is as spooky as its very title suggests. Its story premise is pretty simple to say the least, but it is enjoyable to watch how the movie carefully accumulates the sense of dread around the screen as its two main characters literally delve deeper into a mysterious entity handed to them, and we come to brace ourselves more while fearing for whatever may happen to them in the end.

Its two main characters are Tommy Tilden (Brian Cox) and his son Austen (Emile Hirsch). Tommy is a small-town coroner, and Austen has worked as his father’s assistant for a couple of years. Although he does not like his job much as reflected by a brief conversation scene between him and his girlfriend, Austen still hesitates to leave his widower father and their home, and we see him dutifully assisting his father as they autopsy a burned body recently sent to their morgue located right below their house. As a well-experienced professional, Tommy is meticulous with small forensic details, and it does not take much time for him to deduce the rather suspicious cause of death from the body, though he does not care much about what exactly happened.

Not long after they finished this job during late evening, the town sheriff comes to the morgue. As shown from the opening scene of the movie, a terrible incident happened to one family living in the town, and, while quite perplexed by the peculiar aspects of the incident, the town sheriff and his deputies discover something very strange in the basement of that ill-fated family’s house. Inside a hole recently dug up in the ground of the basement, there is the body of a young unknown female, and they still cannot identify this dead woman despite the mostly intact condition of her body. 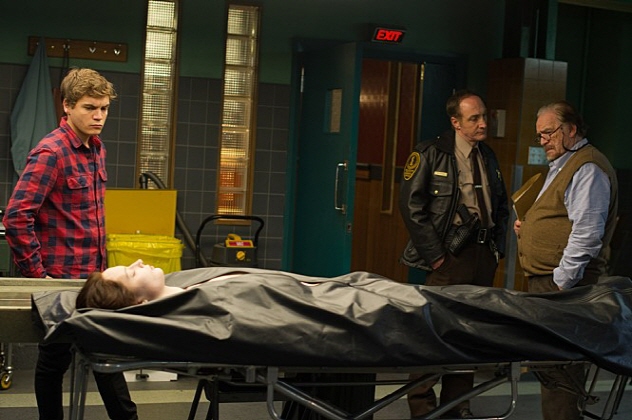 Anyway, the sheriff wants to know the cause of her death as soon as possible at least, so he hands over the body to Tommy, and Tommy agrees to do an extra night job for the sheriff. Although he is supposed to go outside along with his girlfriend right after his work hour, Austen decides to help his father as usual. After all, this seems to be another routine job to be taken care of within around 2 hours, and his girlfriend respects his decision.

However, as they begin the first step of their autopsy on ‘Jane Doe’, Tommy and Austen notice how odd her body is in many aspects. While there is no visible sign of trauma on her skin, they find multiple bone fractures in her limbs, and they naturally wonder how the hell she sustained such serious injuries without any sign of physical harm on her body, which looks almost impeccable on the surface except 1) her rather thin waist which looks like another possible sign of physical harm and 2) her cloudy eyes which implies that she died far earlier than the overall condition of her body suggests.

Tommy simply regards these puzzling aspects as pieces of a fascinating forensic puzzle to be solved sooner or later, but then he and his son continue to discover more weird things as they keeps going on with their procedure. When they try to cut her chest open, her body turns out to be a lot more sanguine than expected, and then they come across more perplexing surprises when they look closer into her chest.

As they spend more time in their morgue alone with this increasingly disturbing body, Austen finds himself becoming quite nervous, and he notices more of how the atmosphere in the morgue feels creepier than before. Not long after they hear from their old radio that a sudden storm is coming, they are stuck in their morgue as electricity is suddenly cut off for no apparent reason, and it feels more like that something sinister is hanging around inside the morgue. Is it possible that ‘Jane Doe’ is actually quite alive as Austen suspects? If so, what can they possibly do about that? 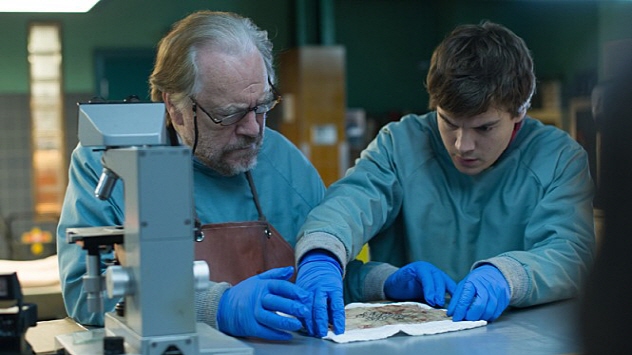 While toying with that dark possibility during its first half, the movie builds up its ominous atmosphere step by step. While I appreciated its nice variation of a certain genre cliché associated with cat, I enjoyed how it has a gory, morbid fun with Jane Doe’s anatomical details to be examined by Tommy and Austen, which will surely make some of you cringe for good reasons. The movie also shows a wry sense of dark humor at times, and I especially like an early scene where Tommy explains to Austen’s girlfriend about a little traditional object he always puts on the bodies stored in his morgue.

The screenplay by Ian Goldberg and Richard Naing is efficient in their economical storytelling. While we do not know a lot about Tommy and Austen, they are presented as engaging human characters via small, succinct details, and Brian Cox and Emile Hirsch are believable in their respective lead roles. As we watch their characters working together, their characters’ personal/professional relationship is organically established thanks to their good performance, and Cox and Hirsch have a nice scene when their characters are allowed to have a little personal moment between them later in the film.

The movie is directed by André Øvredal, who previously made “Trollhunter” (2010). While that film was an amusing fantasy movie coupled with mockumentary style, “The Autopsy of Jane Doe” is a chilly horror film, and I was entertained by how deftly the movie sustains creepiness and suspense during its shorting running time (86 minutes). This is a competent genre piece which succeeds as much as intended, and you will not disappointed if you are looking for a little scary fun. 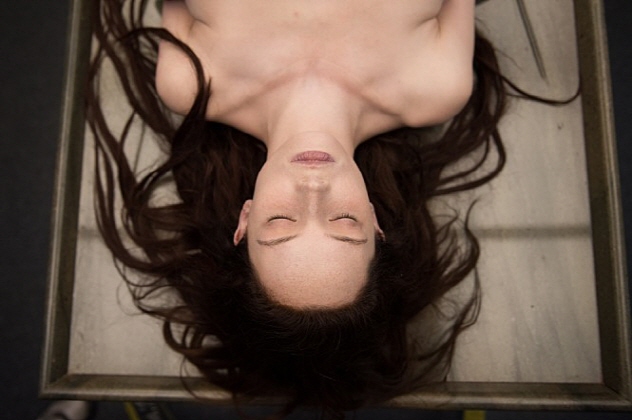 This entry was posted in Movies and tagged Autopsy, Coroner, Father and son, Horror. Bookmark the permalink.