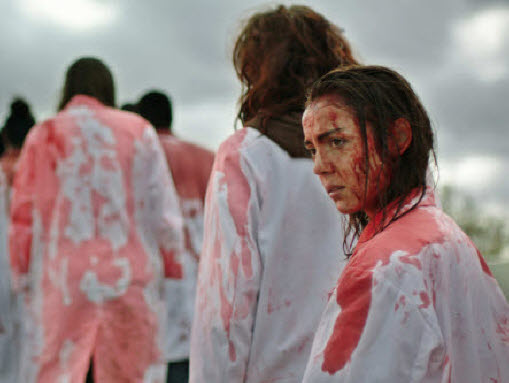 Utterly disturbing and gruesome, French horror film “Raw” is definitely not for everyone. Since it was shown at the Cannes Film Festival early in last year, I have heard about how some audiences were quite disturbed or repulsed during its screenings, and now I can assure you that it is certainly one of the most uncomfortable movie experiences I had during this year. While I seriously doubt whether I will able to watch it again, I observed it with horrible fascination and dark amusement, and I admired many of its striking moments, which are still vividly remembered in my mind even at this point.

After its quiet but ominous opening scene unfolded on a remote road, the movie begins the story as its young heroine Justine (Garance Marillier) is about to start her first year at some prominent veterinary school where her parents graduated from. Her elder sister Alexia (Ella Rumpf) has already been there for a year, and Justine’s parents expect Alexia to support her younger sister well while Justine gets herself accustomed to her new environment.

Not long after Justine arrives at the school dormitory, the hazing week for freshmen is started, and she and other freshman students including her gay roommate Adrien (Rabah Naït Oufella) are forced to endure a series of cruel pranks and rituals by gleeful seniors including Alexia. At one point, Justine and other freshman students are suddenly gathered together in a corridor and then are demanded to crawl to their destination spot, and this and other cruel acts of hazing in the film reminded me that I was rather lucky during my first year in KAIST.

The situation seems tolerable to Justine as she manages to endure along with her fellow freshman students, but then there comes a point when she faces a very difficult challenge. After being showered with a bucketful of animal blood in a way reminiscent of “Carrie” (1976), she and other freshman students have to eat a raw piece of rabbit kidney, but Justine hesitates because she has been a strict vegetarian just like her parents. She naturally resists when her turn comes, but not even her own sister is on her side, and she is eventually coerced to eat rabbit kidney.

This carnivorous act of hers merely looks like a trivial minor transgression, but something begins to happen to her. On the next day, she suffers an inexplicable incident of skin problem, and then she finds herself craving for meat. At first, it is just a piece of cooked meat she attempts to steal at a school cafeteria, and then she comes to devour raw chicken during one night. She surely feels disgusted, but her urge keeps growing nonetheless, and there is a cringe-inducing moment as she vomits something inappropriate to eat into a toilet stool.

This alarming progress eventually comes to a tipping point when she and Alexia happen to spend one night together. After their crude attempt of Brazilian waxing on Justine’s pubic hair goes wrong, Alexia tries to handle this problem with a pair of scissors, but then an unfortunate accident happens, and that accident leads Justine to the discovery of the ultimate object of her craving: human flesh. Spiced a bit with wry dark humor, this disturbing scene is handled well with enough power and conviction on the screen, and we cannot help but watch it even while disgusted and horrified by Justine’s small but significant act of cannibalism.

Although the movie does not explain a lot, we gradually come to gather that Justine’s cannibalistic tendency is based on genetic factors. Not so surprisingly, her sister turns out to harbor the same tendency behind her back, and we get to know a bit about how she has managed her own craving, as she gives her sister one hell of bloody example. In case of their loving parents, it is later revealed that they found a way to maintain their married life, and that is surely another nice dark touch to be appreciated in the film.

Meanwhile, the movie continues to observe Justine and other freshman students’ ongoing hazing week. Figuratively and literally delving more into matters of flesh and blood during their classes, they endure more hazing from seniors, and this puts more stress into Justine’s agitated mind as she struggles more with her newfound instinct which is further fueled by her first taste of human flesh. We subsequently get a darkly amusing scene where she cannot help but look intensively at Adrien from the distance, who certainly looks desirable (and tasty) to her because of his good-looking body.

The movie is directed by Julian Ducournau, who received the Petit Rail d’Or award at the Cannes Film Festival for her short film “Junior” (2011). While this is her first feature film, she demonstrates here a dexterous control of mood and style, and I was especially impressed by the raw emotional horror pulsating below the polished texture of her movie. Thanks to the nervous score by Jim Williams and the meticulous cinematography by Ruben Impens, the movie is constantly filled with nervous vibe even when nothing much seems to be happening on the screen, and Garance Marillier is natural and captivating in every disturbing step her character takes along the plot. She and her co-star Ella Rumpf did a commendable job of vividly conveying to us the tumultuous relationship dynamic between their characters, and Rabah Naït Oufella, Laurent Lucas, and Joana Preiss are also solid in their respective roles.

While it may be too unpleasant for some of you, I recommend “Raw” for not only its technical achievement but also the deft handling of its main subjects. This is a twisted coming-of-age drama willing to disturb and challenge its audiences, and you may appreciate that aspect as much as me once you accept what it intends to do. Anyway, please don’t tell me I did not warn you in advance.

This entry was posted in Movies and tagged Cannibalism, Family, Horror, Sisters, Veterinary. Bookmark the permalink.