South Korean film “A Taxi Driver” drives along a rather predictable route, but it knows well what it has to do for engaging us and then touching us. Although I still think it could be improved in several aspects, the movie has enough good things for recommendation, and it is also supported by another strong performance from one of the best performers in South Korea.

The movie begins with its everyman hero going through another ‘usual’ day of his plain daily life in Seoul, May 1980. Not long after the assassination of President Park Chung-hee in October 1979, General Chun Doo-hwan seized the power through his coup d’État, and he subsequently declared the martial law in the following year while further solidifying his political status. As many prominent political figures including Kim Dae-jung were accordingly arrested, lots of people demonstrated against Chun and his regime, and this unstable nationwide situation eventually culminated to a civil uprising in Gwangju on May 18th, 1980.

For Man-seop (Song Kang-ho),  who is one of many taxi drivers working in Seoul, frequent demonstrations in his city are simply an annoying problem blocking him from more money to earn. He does not care much about why those demonstrators are against the government, and all he cares about is earning enough money for him and his young daughter, who has been his only close family member since his wife died early not long after he came back from Saudi Arabia.

On one day, Man-seop happens to overhear a conversation about one foreigner who offers a considerable amount of money for a round trip between Seoul and Gwangju. Although he and others have heard rumors about what is going on in Gwangju, he instantly snatches that opportunity mainly because he has been behind several months in paying his rent, and that is how he comes to meet Jürgen Hinzpeter (Thomas Kretschmann), a German reporter who flies to Seoul from Tokyo after sensing something big from the ongoing situation surrounding Gwangju. 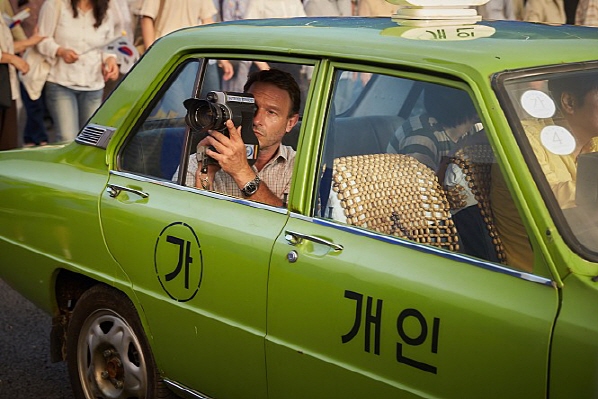 While everything looks fine at first as Man-seop gladly drives his taxi along a highway leading to Gwangju, he soon comes to realize that he inadvertently gets himself into a very serious circumstance. As he and Hinzpeter come close to Gwangju, they come across a warning sign on the road and then they come upon a makeshift military post where a bunch of soldiers are blocking the road. When they manage to arrive in Gwangju via a narrow detour, they behold the city mired in quiet unrest, and they soon come across a bunch of young demonstrators, who take Hinzpeter to a nearby local hospital which is filled with lots of people injured or killed by soldiers.

Man-seop tries to get out of Gwangju as soon as possible, but he only finds himself stuck along with Hinzpeter in the city, and, not so surprisingly, he come to witness the dark, brutal side of his country as Hinzpeter insists on recording more of what is happening in Gwangju. At one point, he watches a peaceful mass demonstration being savagely suppressed by soldiers, and that gut-chilling pandemonium certainly shakes up his belief in his country while also igniting his guilt on having been oblivious to the injustice inside his world.

While Man-seop is a fictional character, the movie is inspired by a dramatic real-life story of German journalist Jürgen Hinzpeter, who died early in last year. As shown from the movie, Hinzpeter managed to sneak into Gwangju thanks to an unknown taxi driver who bravely took the risk for his foreign passenger, and what Hinzpeter shot there has been one of a few visual records vividly showing the atrocities committed in Gwangju during that horrible period in 1980.

The screenplay by Eom Yu-na is often blatant especially during its melodramatic third act, but its earnest storytelling works on the whole. Its main characters are rather broad and simple, but they are depicted with recognizable human qualities nonetheless, and that is why the movie is better than “May 18” (2007), another major South Korean film about the Gwangju Uprising. While I merely observed that film from the distance due to its thin plot and stiff cardboard characters, “A Taxi Driver” held my attention via its more engaging storytelling, and I found myself caring a lot about Man-seop, Hinzpeter, and some other supporting characters in the film – even during the climactic part of the movie which requires a considerable degree of suspension of disbelief for good reasons.

Director Jang Hoon, who previously impressed me and other South Korean audiences with “Secret Reunion” (2010) and “The Front Line” (2011), did a competent job of steadily maintaining narrative momentum, and it surely helps that the period background and atmosphere in the movie mostly feel authentic on the screen. For instance, several South Korean pop songs from the 1980s are effectively used throughout the film, and my parents and other older South Korean audiences will certainly appreciate these aural period details more than me.

As the ordinary hero of the movie, Song Kang-go utilizes well his likable screen persona as he did before in several films including “Memories of Murder” (2003), “The Host” (2006), “Secret Reunion”, and “The Attorney” (2013), and he has a number of good scenes as his character earns understanding and empathy from us. His character’s gradual change over the story may be a pretty predictable character arc, but that process feels sincere and heartfelt thanks to Song’s excellent performance, and the movie surely confirms to us again that he is indeed one of the most interesting South Korean actors at present.

On the opposite, Thomas Kretschmann holds his own place well, and it is a pleasure to watch how his acting is mixed well with that of his South Korean co-performers. While Yoo Hae-jin is enjoyable as the de facto leader of taxi drivers in Gwangju, Ryu Jun-yeol is also fine as a young demonstrator who comes to befriend Man-seop and Hinzpeter by chance, and Park Hyuk-kwon, Choi Gwi-hwa, Ko Chang-seok, and Jeon Hye-jin fill their respective minor supporting roles as required.

“A Taxi Driver” is not without weak points. It could be more effective and interesting if it put more emphasis on its foreign perspective on the Gwangju Uprising, and I must point out that it is less colorful compared to what was achieved in “Scout” (2007), a small overlooked South Korean comedy drama film which is also about the Gwangju Uprising. Despite these and other weak aspects, the movie mostly succeeds in what it intends to do, and I often found myself becoming involved in its human drama more than expected during my viewing. In short, this is one of better South Korean films to watch during this summer season.