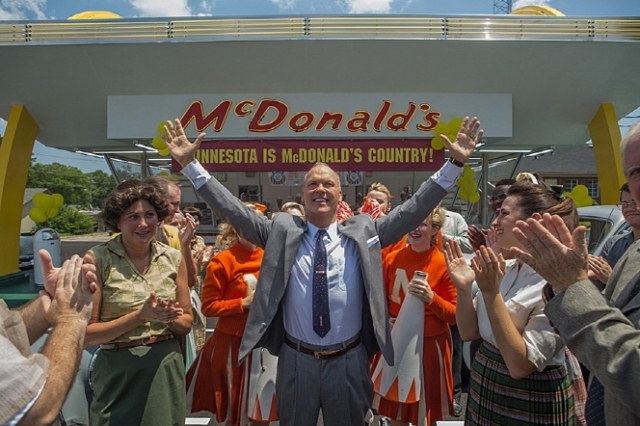 As a story about the early business years of McDonald’s, “The Founder” is fascinating as observing how this famous fast food restaurant chain company was pushed up to a bigger success to come, but it is also cautionary at times as recognizing the bitter, ruthless side of what can be described as the aggressive takeover of an American dream. It is enjoyable to watch its ambitious hero going all the way to his enormous achievement, but we cannot help but feel uncomfortable about his cutthroat business tactics, and the ambivalent attitude of the movie to its hero and story further accentuates that impression.

The early part of the movie shows us how Ray Kroc (Michael Keaton) came to across a chance which would change his life forever. It is 1954, and Kroc is a salesman traveling around rural areas of Missouri to sell multi-mixer milkshake makers. While he does not persuade many potential buyers despite his efforts, he is notified that some drive-in restaurant located in San Bernardino, California ordered no less than six milkshake makers, and he decides to go to that restaurant out of curiosity.

The restaurant in question is run by two brothers named Dick and Mac McDonald (Nick Offerman and John Carroll Lynch), and Kroc is instantly impressed by how tasty hamburgers are quickly served to customers there. The McDonald brothers willingly show Kroc more of how their restaurant is operated, and we subsequently get an amusing flashback sequence showing how the McDonald brothers developed and polished their idea on quicker customer service. In those days, you had to wait for more than 20 minutes to get your ordered food at a drive-in, but the McDonald brothers vastly minimized the waiting time as maximizing the efficiency of the cooking and serving process as much as possible, and it is certainly interesting to observe the early stage of a process familiar to many of us at present. 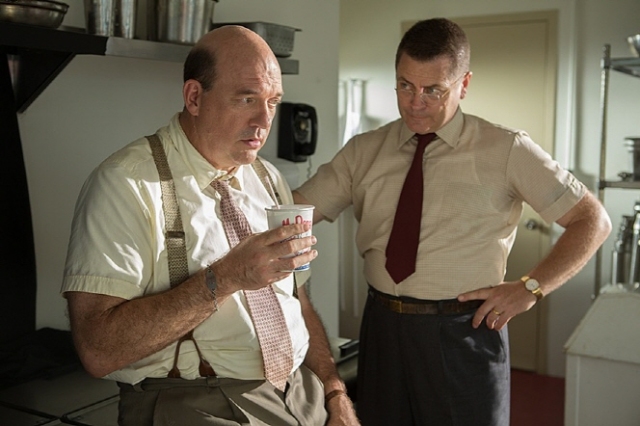 Seeing the considerable potential from the McDonald brothers’ business, Kroc eventually becomes their business partner, and he is determined to push up the business to the franchise of national level although the McDonald brothers already attempted that and failed before. Thanks to his persistence, he manages to get a bank loan for business expansion, and he soon has several franchises opened around the country. Although the first steps are not that easy as he experiences a number of setbacks, he comes to find a clever business strategy for not only expansion but also profit, and that is accordingly followed by far more growth than he and his partners have ever imagined.

However, the McDonald brothers are not so happy about this change while Kroc is willing to do anything in the name of business. As the McDonald brothers regret having Kroc as their business partner, Kroc is gradually annoyed as the McDonalds keep standing on his way to more success, and the circumstance culminates to a big clash between them when Kroc decides to use powdered milkshake for saving cost.

Around that point, the movie begins to take a darker tone with ample amount of bitterness, and the screenplay by Robert D. Siegel takes a neutral position on the conflict between Kroc and the McDonald brothers. While it is undeniable that Kroc unfairly treated the McDonald brothers, the movie also recognizes that Kroc was a smart, resourceful guy who happened to be at the right place and the right time, and it is alternatively compelling and disturbing to watch Kroc’s relentless advance. Sure, his grand business vision was indeed crucial in the success of McDonald’s, but we are reminded that his American dream was taken from his partners, and there is some sense of hollowness when we watch him during the final scene of the movie. 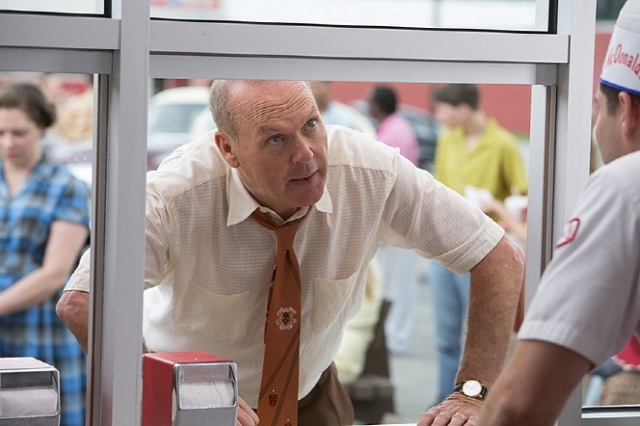 As the electrifying center of the movie, Michael Keaton, who has been recently going through career resurgence thanks to his superlative performances in “Birdman” (2014) and “Spotlight” (2015), ably carries the film, and he is counterbalanced well by his two equally good co-performers. Right from his first scene, John Carroll Lynch, who played Marge Gunderson’s husband in “Fargo” (1996) and the prime suspect character in “Zodiac” (2007), exudes gentle decency, and Nick Offerman, who has been one of the most dependable character actors since his breakout role in TV sitcom series “Parks and Recreation”, is also effective in his usual terseness which functions as a good contrast to Lynch’s amiable appearance.

Compared to the three main characters of the movie, the other characters in the movie are underdeveloped in comparison, and that is the main weakness of the movie. As Kroc’s increasingly estranged wife, Laura Dern is usually required to look disappointed or exasperated during her scenes; the movie often feels superficial in the depiction of the growing distance between Kroc and his wife, and the same thing can be said about the relationship between Kroc and Joan Smith (Linda Cardellini), a married woman who happens to come across Kroc via her husband and instantly clicks well with him.

Although it does not reach to the level of “The Social Network” (2010), “The Founder” is an entertaining drama thanks to the spot-on performances by Keaton, Lynch, and Offerman, and the director John Lee Hancock did a competent job on the whole. It could be tastier, but it serves the story mostly well, and you will probably want to go to McDonald’s and get a Big Mac because of those sizzling hamburger patties on the screen.