“The Fate of the Furious”, the eighth entry of the Fast and the Furious series, tries quite hard to impress its target audiences, but it ultimately is stuck in its enduring but predictable formula. Yes, it surely serves you with many well-made action sequences as demanded, and the result looks as spectacular as you can expect, but it does not have enough things to distinguish itself like the better entries of the franchise, while suffering from several glaring problems too big to be overlooked.

Considering that it is mostly all about actions, explaining the plot of the movie is pretty meaningless, but let me try a bit. When Dominic Toretto (Vin Diesel) is enjoying his honeymoon time with his girlfriend Letty Ortiz (Michelle Rodriguez) in Havana, Cuba, he is approached by a criminal mastermind named Cipher (Charlize Theron), who needs Dominic for the success of her evil plan. Because Cipher thrusts him into a situation he cannot ignore at all, Dominic has no choice but to betray Letty and his other colleagues during their latest operation involved with a certain type of weapon of mass destruction.

Surely feeling surprised and betrayed, Letty and other team members become determined to go after Dominic and Cipher, and Frank Petty (Kurt Russell), a high-ranking secret government agent who previously helped the team in “Furious Seven” (2015), is willing to provide anything they need for stopping Cipher’s plan. In addition, Deckard Shaw (Jason Statham), who was the main villain in “Fast Seven”, comes to join the team just because of his previous connection with Cipher, and he understandably does not get along well with the people who were once his enemies not so long ago.

Driving fast along its thin plot, the movie unfolds a number of big action sequences, and some of them are quite ridiculous and preposterous to our amusement. While the opening action sequence set around the streets of Havana goes all the way to outrageousness as Dominic pushes a shabby vehicle to sheer extreme, the action sequence unfolded in the middle of Manhattan is impressive with heaps of hacked vehicles, and the climactic action sequence set in some arctic area of Russia will not disappoint the fans of the franchise as throwing many things including a big nuclear submarine into its busy, bombastic mix.

These action sequences are entertaining to watch at times, but they merely feel as big and loud as the high points of “Fast Five” (2011), “Furious 6” (2013), and “Furious Seven” (2015). Although I did not like “Furious 6” enough for recommendation, I still remember well how uproariously the audiences around me responded to one particularly unbelievable moment of action between Letty and Dominic in that film, and it is disappointing that “The Fate of the Furious” does not have any similar moment like that.

Above all, I am quite disappointed to see the movie wasting two talented performers in thankless supporting roles. Charlize Theron steadily maintains the cold façade of her villain character, but that is all she is demanded to do, and it is all the more disappointing when you remember how terrific she was as Imperator Furiosa in “Mad Max: Fury Road” (2015), which is a far better vehicle action film than any entry in the Fast and Furious series. In case of Helen Mirren, she only appears in two brief scenes, and I think she would enjoy herself a lot more if she were allowed to drive any of those fancy vehicles in the movie.

The main cast members of the film mostly acquit themselves well. Trudging along a bland character arc you can easily predict, Vin Diesel is less engaging than before, and I wonder whether it is due to the absence of late Paul Walker, who supported the series along with Diesel for many years before his untimely death in 2013. While Michelle Rodriguez generates some degrees of seriousness as her character struggles with her conflicted feeling toward Dominic, Chris ‘Ludacris’ Bridges and Tyrese Gibson provide little amusing moments as expected, and Scott Eastwood and Nathalie Emmanuel fill their respective supporting roles as required.

The main fun of the movie comes from Dwayne Johnson, Kurt Russell, and Jason Statham. I have come to appreciate more of Johnson’s undeniable screen presence during recent years, and I certainly enjoyed watching him effortlessly moving back and forth between action and comedy. While Russell plays his unflappable role with gusto as before, Statham has a big fun during the hilariously tense interactions between him and Johnson, and that took me back to the equally amusing confrontation between Johnson and Diesel in “Fast Five”.

As I said before, I am not that enthusiastic about the Fast and the Furious series, but I have admired how the franchise has kept going during last 16 years. While it seemed to hit the bottom in “Fast & Furious” (2009), it bounced back with “Fast Five”, which I regrettably underrated. It went a bit down with “Furious 6”, but then it recharged itself in “Furious Seven” (2015) while also proving a poignant exit for Walker.

“The Fate of the Furious” is two or three steps down from “Furious Seven”, but it is not as bad as “Fast & Furious” at least, so I give it 2.5 stars. Considering its huge worldwide box office success at present, there will surely be more sequels in the future, and I hope they will be better than this mildly deficient entry. It is not so refreshing, but the series has not run out of its fuel yet. 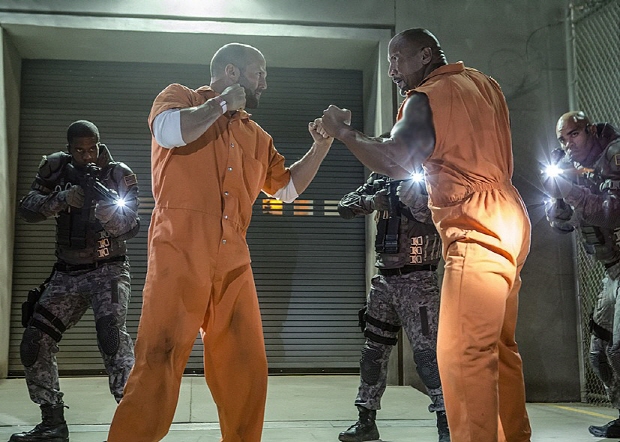 This entry was posted in Movies and tagged action, Vehicle. Bookmark the permalink.