At the beginning of Martin Scorsese’s “Silence”, we hear the sound of insects on the soundtrack. Recurring throughout the film, that plain sound of nature becomes more chilling as accentuating the deepening silence on human suffering in the film, and the grim, daunting moral dilemma of its story feels more palpable to us as we observe its Christian hero relentlessly pushed against this dilemma which has no easy answer at all. How much one can endure and persist in the name of God? Can one’s faith remain intact even after committing sins against God? And what if God is not merely silent but does not exist at all?

Set in the mid-17th century, the movie begins with Father Cristóvão Ferreira (Liam Neeson) describing what he witnessed in Japan, 1633. Since Portuguese Jesuit priests came into Japan during the mid-16th century, Christianity had spread widely in Japan for next several decades, but then the Japanese government eventually decided to ban Christianity for blocking unwanted foreign influence, and that led to the mass persecution of European priests and friars as well as Japanese Christians. Many of these people were demanded to apostatize, and people who refused to do that were mercilessly punished, as shown during the opening sequence unfolded at a volcanic hot spring.

Along with Ferreira’s letter which was belatedly sent to Macao several years later, there comes another news on Father Ferreira, and Father Sebastião Rodrigues (Andrew Garfield) and Father Francisco Garupe (Adam Driver), two young Jesuit priests who were once Father Ferreira’s pupil, cannot believe the news. It seems their mentor apostatized in the end, and that makes their mission more urgent than before; they must go to Japan for not only remaining Japanese Christians but also their mentor who they think needs to be saved if that new is indeed true.

In Macao, they meet a Japanese Christian guy named Kichijiro (Yôsuke Kubozuka), who is not that trustworthy considering his wretched, drunken state but seems to be the only one who can guide them in Japan. Not long after they and Kichijiro manage to sneak into a rural beach area near Nagasaki, they encounter a bunch of village people who have kept their faith in secret, and Father Rodrigues feels some fulfillment as doing religious services for those poor people who are glad to receive his blessing.

Not so surprisingly, the circumstance soon becomes quite gloomy as the village is shaken by the search for Christians by a Japanese government official named Inoue Masashige (Issey Ogata). During one horrific sequence, three villagers meet their long, torturous death on the beach after being exposed as Christians, and Father Rodrigues and his colleague helplessly watch all of this from the distance as tormented by their growing guilt.

And that is just the prelude to the other grueling moments in the film which are often quite difficult to watch. After parting with his colleague for each other’s safety, Father Rodrigues becomes more desperate and helpless than before as struggling with more doubt and conflict. When he is finally captured, he thinks he is ready for sacrificing himself, but then he finds himself in an impossible moral circumstance while watching local Christians suffering or being executed in front of him.

All he has to do for saving those suffering Christians is putting his foot on a picture of Christ just like his mentor did in a similar situation, but that means officially denying his god, and he naturally agonizes over his increasingly unbearable circumstance. Maybe this is the ultimate test for his faith, and he surely wants to endure like Jesus did when he carried his cross to Golgotha and then died for the mankind, but Jesus at least knew that God was watching over his suffering. Rodrigues continues to pray, but his god gives no answer while being silent as before – and there only come more suffering and despair to tremble his conviction.

Firmly maintaining its calm, austere attitude, the movie observes all these dark sights of human agony and brutality from the distance, but we cannot help but feel their sheer horror as everything is vividly conveyed via its detached viewpoint which often evokes God’s solemn, objective viewpoint. As the music is sparsely utilized without any emotional touch, the sound in the film becomes a more prominent element in the background of silence, and it is particularly exemplified well during the eventual meeting between Father Rodrigues and Father Ferreira – or a gut-chilling moment involved with what initially seems like the mere sound of snoring.

It should be noted that Inoue, the man chiefly responsible for Father Rodrigues’ predicament and the suffering of local Christians, is not a one-dimensional villain at all but a wise, reasonable guy who knows what should be done – and what will happen. While making a good point on why Christianity is not suitable for his country during one scene, he does try to persuade his foreign prisoner as gently as possible, but he already knows well what he will have to order in the end, and he does not hesitate at all when it is the time to push Father Rodrigues further for ‘cutting the root’.

“Silence” is based on the novel of the same name written by Shūsaku Endō, and the adapted screenplay by Scorsese and his co-adapter Jay Cocks is mostly faithful to its source. Scorsese wanted to make this film for more than 20 years, and that is no surprise at all considering that many of his films are linked with Catholic themes in one way or another. While “The Last Temptation of Christ” (1988) surely comes closest to the theological intensity of “Silence”, Father Rodrigues’ inner conflict around sin and guilt is not so far from the psychological/spiritual tumults observed from the troubled heroes of Scorsese’s other films including “Mean Streets” (1973), “Taxi Driver” (1976), “Raising Bull” (1980), and “Bringing Out the Dead” (1999).

Watching “Silence” is not a comfortable experience at all, but it is another superlative work from Scorsese, and it never steps back from its hard questions even during the phlegmatic finale, which feels a bit too long at first but then becomes more haunting and thought-provoking as we reflect more on its ambiguous aspects open to different interpretations. I am still not so sure about what can be inferred from the last shot of the film, but I think I will not forget its silence for a long time. 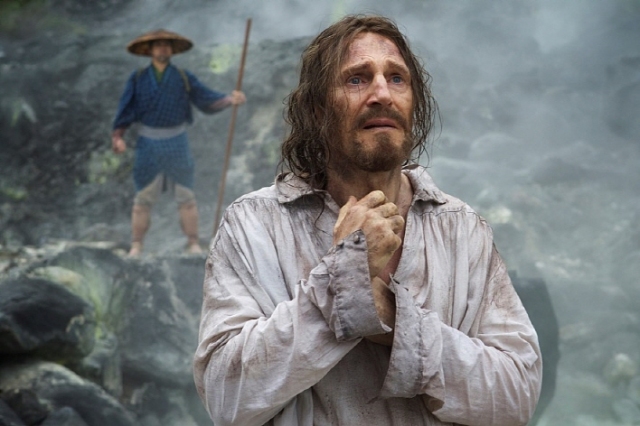 This entry was posted in Movies and tagged Catholicism, Christianity, Persecution, Religion. Bookmark the permalink.