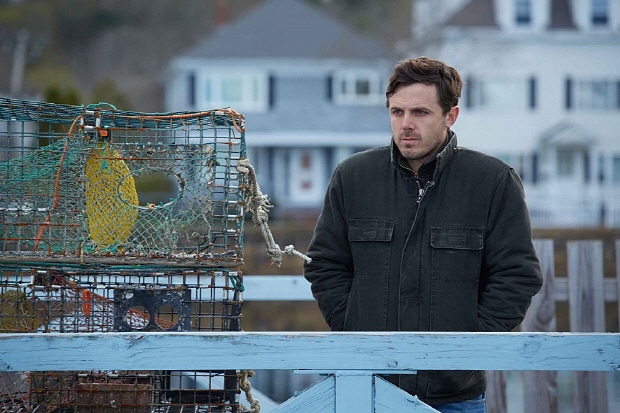 They say time can heal us, but that is not true for the gloomy hero of “Manchester by the Sea”. Gradually revealing the emotional scar and pain in his heart, the movie gives us a vivid, intimate slice of his life while deftly balancing itself between humor and pathos, and we come to know and understand this broken man as he faces his old past which still feels painful to him.

The movie opens with Lee Chandler (Casey Affleck) going through his usual daily routine during one cold, snowy winter day as the janitor of several apartment buildings in Quincy, Massachusetts, and the movie effortlessly sets its tone as watching him doing fixing jobs for several different tenants. While they briefly appear in their respective scenes, the tenants in the movie are all presented with the realistic sense of ongoing life around them, and there is an amusing moment when one of them shows some interest toward Lee and then he responds to her in a rather clumsy way.

Living alone in his stark basement apartment, Lee is not particularly social to say the least. We see him chided by his boss for being not so nice to tenants, and then we watch him spending his time alone at a bar. When a woman makes a blatant attempt to get into conversation with him, he shows no interest at all as maintaining his sullen attitude, and it also turns out that he has some serious anger issue. 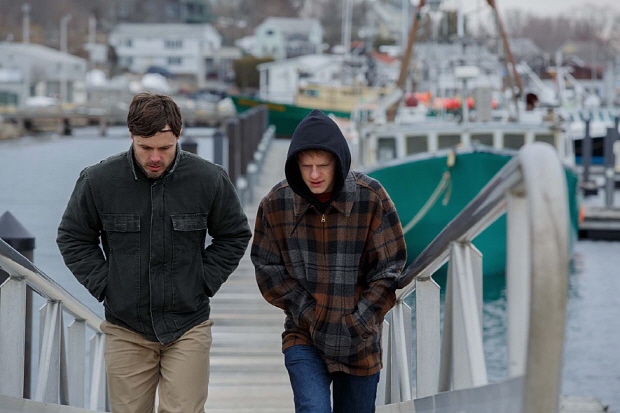 On one day, he gets an emergency call, and he is notified that his older brother Joe (Kyle Chandler), who lives in their hometown Manchester, was taken to a hospital due to his chronic heart problem. When Lee arrives at the hospital, Joe already died, and Lee has to take care of many things including Joe’s funeral on behalf of Patrick (Lucas Hedges), Joe’s teenage son who was once close to Lee as shown from a flashback scene showing their happy time on the sea with Joe.

While the process of Joe’s funeral turns out to be slower than expected, Lee gets a surprise news. Joe’s lawyer informs him that Joe appointed Lee as his son’s legal guardian in advance. Joe’s decision seems sensible considering that the only close relative besides Lee recently moved out of Massachusetts and his alcoholic ex-wife left him and Patrick some years ago, but there is one problem; moving back to Manchester is the last thing Lee wants, and Patrick does not want to leave Manchester for living with his uncle.

Via a series of flashback scenes, we get to know more about Lee’s past in Manchester. There was a time when he happily lived with his wife Randi (Michelle Williams) and their three kids, but then their relationship was shattered forever by one tragic incident, and that incident is still hurtfully remembered by him as reflected by one harrowing sequence. Many people in the town also remember that incident well, and one brief scene later in the movie shows us how much he is unwelcomed in the town.

Anyway, Lee continues to stay in Joe’s house while not knowing how to handle this complicated situation, and he reluctantly takes the role of Patrick’s temporary guardian although they do not get along well with each other. They particularly disagree with each other on the matter of Joe’s old family fishing boat; Patrick wants to keep it, but Lee does not care much about it, and he may sell it if that seems necessary. 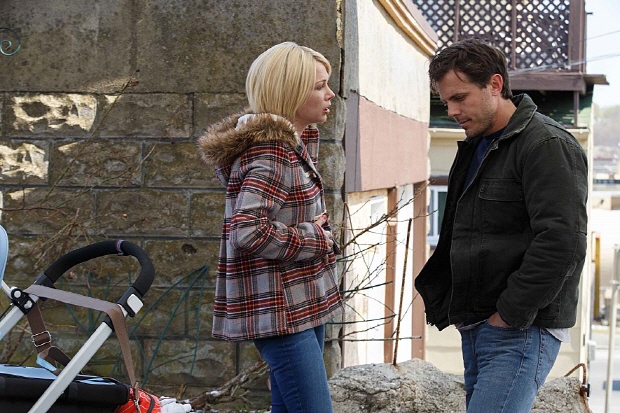 Letting his characters freely rolling along the plot, the director/writer Kenneth Lonergan brings out small but precious human moments to appreciate. While frankly recognizing the pain and grief observed from its characters, the movie often generates unexpected moments of humor, and that is exemplified well by when Lee and Patrick go to the house of Patrick’s girlfriend at one point. Patrick wants his uncle to hold his girlfriend’s mother downstairs because he and his girlfriend are going to have a very friendly time together upstairs, but, not so surprisingly, Lee cannot be that cooperative, and that leads to one of the most humorous moments in the movie.

The performers in the movie are flawless in their nuanced performance while never feeling like trying too hard or too little. Casey Affleck masterfully embodies his character’s guilt and grief in his understated performance, and he has a heartbreaking scene with Michelle Williams when their characters come across each other by coincidence. Affleck is simply devastating as his character tries to look away from what has tormented him, and Williams is equally good as an emotional counterpart to Affleck’s character. While Lucas Hedges, who was deservedly Oscar-nominated along with Affleck and Williams in last month, holds his own place well as another crucial part of the story, Kyle Chandler is poignant in his gentle supporting performance, and other performers including C.J. Wilson, Tate Donovan, Gretchen Mol, and Matthew Broderick are also solid in their respective supporting roles.

Lonergan drew my attention with his wonderful debut feature film “You Can Count on Men” (2000), but then he remained rather silent for more than 10 years until he came back with “Margaret” (2011), a seriously overlooked gem worthwhile to watch for many reasons including Anna Paquin’s compelling performance. “Manchester by the Sea” is another exquisite human drama from Lonergan, and I admire how aptly his story arrives at the final scene with open possibilities for Lee and Patrick. Nothing is certain for them even at that point, but we come to know a lot about them while hoping for the best. That is what a good drama movie does to us, you know. 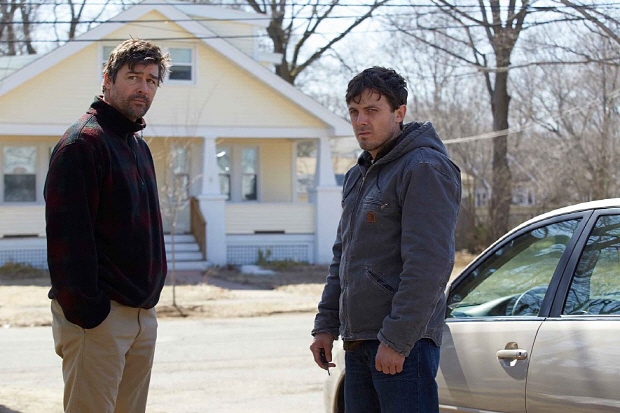 This entry was posted in Movies and tagged Family. Bookmark the permalink.