Oscar-nominated documentary film “What Happened, Miss Simone?” gives us close, intimate glimpses into Nina Simone, a legendary American singer who was called “the High Priestess of Soul”. Even if you are unfamiliar with her career like me (full confession: I do not know much about her except her famous rendition of “Sinner Man”), this documentary is still an informative and interesting overview on her dramatic life and career, and you will come to see and feel a dynamic but vulnerable artist who struggled hard against many obstacles including herself for a long time.

After an archival footage clip showing Simone’s performance at the Montreux Jazz Festival in 1976, the documentary goes back to her early years. Born in 1933 as Eunice Waymon, Simone was the sixth child of a poor black family living in Tryon, North Carolina. After learning how to play piano at her early age, she began to play piano at a local church, and Simone, who mainly talks to us through archival interview recordings, reminisces about how much she enjoyed playing music along with that rapturous spirit among churchgoers.

Her considerable talent was soon noticed by people outside her black community, so young Simone was taught by a local white piano teacher for becoming a classical pianist, but then she found herself being blocked by racial prejudice. Although she enrolled in the Juilliard School of Music in New York, she was later rejected by the Curtis Institute of Music in Philadelphia despite her excellent audition, and that was a very painful moment she would remember for the rest of her life.

For earning her living, she had to perform at a bar in Atlantic City, but she wanted to hide it from her mother who would not approve of her job, and that was how Eunice Waymon became Nina Simone, a stage name inspired by her nickname and French actress Simone Signoret. With her new name, she quickly became popular thanks to her own deft mix of classical approach and pop sensitivity, and we see her rapid rise to more fame and success during the early 1960s.

Around that time, she encountered a New York police detective named Andrew Stroud, and he eventually became her husband while also working as her manager. Although he was a shrewd, forceful figure behind the further success of his second wife (the documentary does not mention that it was the second marriage for both of them), Stroud was sometimes quite harsh and abusive to Simone, and we hear about a number of disturbing episodes between them. While fondly remembering her father, their daughter Lisa also remembers well when he hit her mother hard in the face during their drive on one day, and Simone’s close colleague Al Schackman tells us about when she hurriedly came to him for refuge after she had just gone through another abusive incident by her husband. The documentary also looks into Simone’s personal diary, and it is really unnerving to see how she let herself abused in her tempestuous relationship with Stroud, who gets a rather fair treatment in the film through his interview clips shot several years before his death in 2012.

As pushed into her heavy schedule by Stroud, Simone frequently felt unhappy, exhausted, and frustrated despite her growing success. She desired for something her heart could be passionate about, and she did find it when the Civil Rights Movement during the 1960s entered its most volatile years. Strongly affected by that tragic bombing incident in Birmingham, Alabama in 1963, she went into full throttle mode as participating in the movement, and her incendiary song “Mississippi Goddam” was a forthright public response to the racism in the South. During the Selma to Montgomery march led by Martin Luther King Jr. in 1965, she sang in front of marchers, and she also hung around with many prominent black public figures including James Baldwin, Lorraine Hansberry, and Malcolm X., whose wife was a close friend to Simone. 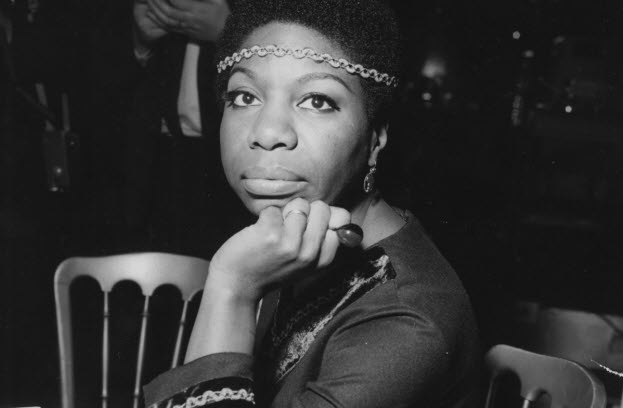 But there were also tolls as she threw herself more into politics. As she became more blatant and radical especially after King’s death in 1968, her openly political view damaged her career, and that consequently led to her departure to Liberia shortly after her divorce with Stroud. Although she found some peace as getting out of music business, she came to face financial difficulty several years later, and she had no choice but to go back to stage in Europe while getting paid less than before.

It was fortunate that she had good friends who could help her during this difficult time. After they took her to a doctor in Holland, it turned out she had been suffering from mental illness, and her condition was improved a lot thanks to medication. She successfully returned to spotlight during the 1980s, and we see her singing “My Baby Just Cares for Me”, which was one of the major successes during her later years.

Currently available on Netflix, “What Happened, Miss Simone” is a sincere and engaging tribute to its subject, and the director Liz Garbus did a good job of presenting Simone’s vibrant personality and undeniable talent. While she struggled and suffered through many difficult moments, she prevailed in the end, and you may sense more from her soulful performances after watching this solid documentary film.

This entry was posted in Movies and tagged Documentary, Musician, Real-life figure. Bookmark the permalink.