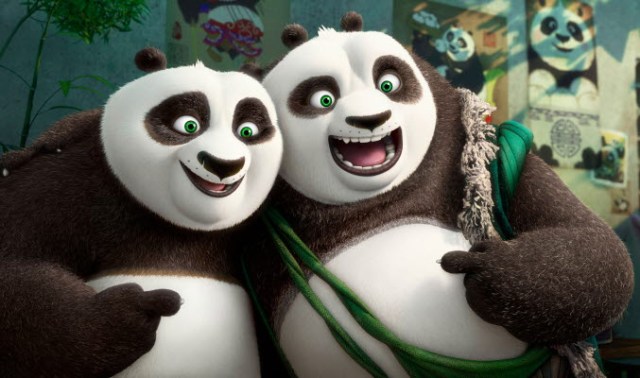 “Kung Fu Panda 3”, the third entry of the popular animated film franchise from Dreamwork, faithfully follows its plot formula which has been established through its two predecessors. Again, its bumbling hero must rise to the challenge when another big danger comes into his world, and we all know he will find more confidence about himself and his destiny in the end after fumbling and tumbling around a series of gags and actions. As a sequel, it is not fresh to say the least, but it is at least buoyed by its jubilant mood and colorful background, and all I had to do during the screening was simply observing how it did its job as much as intended.

The story begins not long after where “Kung Fu Panda 2” (2011) ended. Shifu (voiced by Dustin Hoffman), an old red panda who has been the master of the Jade Palace since his grand master departed to the spirit realm, decides that it is the time for his retirement, so he leaves his teaching position to his star pupil Po (voiced by Jack Black), our panda hero who has been enjoying his rising status as the Dragon warrior along with his colleagues Tigress (voiced by Angelina Jolie), Monkey (voiced by Jackie Chan), Mantis (voiced by Seth Green), Viper (voiced by Lucy Liu), and Crane (voiced by David Cross).

While he has gained lots of confidence through his previous adventures, Po is not so sure about whether he can be a teacher as good as his master, and then he comes across Li Shan (voiced by Bryan Cranston), a panda who turns out to be none other than Po’s biological father who was separated from his son a long time ago. Although he knows that he was adopted by his goose stepfather Mr. Ping (voiced by James Hong), Po is surprised to meet his real father, and the father and son quickly get along well with each other because, well, blood is thicker than water.

Meanwhile, there is a trouble coming toward the Jade Palace. When Oogway (voiced by Randall Duk Kim), Shifu’s currently diseased master, is peacefully enjoying another meditation in the spirit realm, he is ambushed by Kai (voiced by J.K. Simmons), Oogway’s old comrade who has been his enemy since their deadly duel in the distant past. Determined to become far more powerful than he ever was, Kai has been usurping ‘chi’, which is pretty much like the Force in Star Wars films, from many other masters in the spirit realm, and Oogway’s chi eventually becomes Kai’s last booty before Kai goes back to the world of the living for collecting more chi.

For stopping Kai, Po needs to learn more about how to master chi as soon as possible, so he goes to Li Shan’s hidden mountain village after his father says he can teach it to his son in the village. When Po, Li Shan, and Mr. Pong arrive in the village, we see lots of pandas on the screen, and Po becomes more comfortable with being himself as hanging around his father and all these chubby pandas including Mei Mei (voiced by Kate Hudson), a coquettish panda girl destined for show business.

While providing a lot of slapstick moments as Po rolls here and there along with other pandas, Jennifer Yuh Nelson, who previously directed “Kung Fu Panda 2”, and her co-director Alessandro Carloni also serve us with a number of kinetic action sequences as Kai is approaching toward his ultimate goal step by step. Besides a pair of knives linked through a chain, this big bad ox can unleash and control a bunch of jade-colored zombies in the shapes of various masters he defeated, and the increasing number of these zombies makes the situation all the more difficult for Po and other characters around him. There are lots of zips and zaps across the screen, and the action sequences in the film are mainly presented through quick, frantic cuts and zooms, but they are fun and exciting enough to entertain us at least.

The digital animation in the film is bright and colorful on the whole, and I liked its splendid sights which will certainly look dimmer in 3D. The spirit realm scenes in the movie are apparently intended for 3D visual effects, but I did not feel much of the need to wear 3D glasses, and I think you may save some money through watching the 2D version instead of the 3D version.

Reprising his most popular character, Jack Black is good as usual in his engaging voice performance, and he is supported well by the supporting cast members. Like Black, Dustin Hoffman, Angelina Jolie, Jackie Chan, Seth Rogen, Lucy Liu, David Cross, James Hong, and Randall Duk Kim have been familiar with their respective roles, and they fill their positions with ease. The new cast members Bryan Cranston, Kate Hudson, and J.K. Simmons are also solid in their respective voice performances, and Simmons relishes his villain role which is alternatively silly and menacing.

When “Kung Fu Panda 2” was about to be released, I was skeptical mainly because there seemed to be no need for a sequel to follow “Kung Fu Panda” (2008), but then I was surprised to see that it actually had more fun and excitement than I expected. “Kung Fu Panda 3” is not better than its predecessor, but its formula usually works in spite of its thin story and some underdeveloped potentials in the plot (I am still wondering whether interspecies relationship is possible in its world, for example). Its weak points are mostly compensated by its breezy energy and well-made animation, and the endearing quality of its good-natured hero still works on me, but I must say that one panda is more than enough for me.

This entry was posted in Movies and tagged Animation Film, Fantasy, Father and son, Martial arts. Bookmark the permalink.