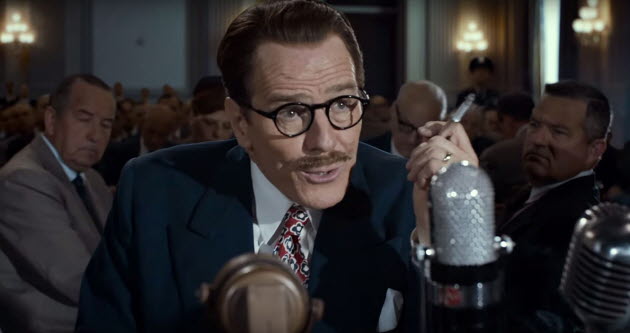 As a biography film about one legendary Hollywood figure, “Trumbo” looks trivial compared to his larger-than-life status. Here is a man who steadily fought against the injustices inflicted upon himself and his ill-fated colleagues for years while never bending his hardcore left-wing political beliefs, but the movie merely chronicles what happened during the darkest period of his life in Hollywood. Its subjects are certainly worthwhile to be told and shown, but what we get here is a passable TV movie instead of something more passionate and interesting.

It is 1947 in Hollywood, and Dalton Trumbo (Brian Cranston) has been riding on his fame as one of the top screenplay writers in the town, but the storm is gathering as he and his colleagues are increasingly concerned about the Red Scare being spread around the country. When fascism swept across Europe during the 1930s, Trumbo and many other left-wing American figures joined the Communist Party USA (CPUSA), and that had been tolerated for a while as the Soviet Union became one of their nation’s allies during the World War II, but the tide was turned once the war was over and then followed by the beginning of the Cold War, and the American society became warier of the increasing influence of the Soviet Union and China during that period.

And that was when the House Un-American Activities Committee (HUAC) came in. Unfairly deemed as the enemies of the American society, many people around the country were brought to this really shameful un-American committee in Washington D.C. and then forced to testify about their former/current left-wing political activities or against people close to them, and Hollywood was no exception. While several prominent right-wing Hollywood stars including John Wayne and Ronald Reagan were willing to step forward for driving communism out of Hollywood, the powerful moguls of top Hollywood studio films made the blacklist for avoiding public accusation and protecting their industry, and their blacklist resulted in many personal pains and tragedies during the reigning years of HUAC, which reached to the peak with the rise of Senator Joseph McCarthy during the 1950s. 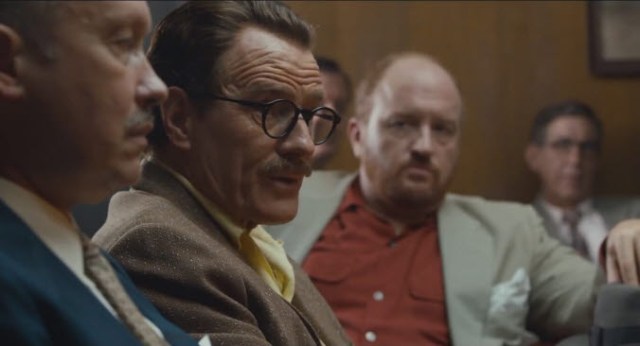 As partially supported by Trumbo’s friend Edward G. Robinson (Michael Stuhlbarg), Trumbo and his close colleagues fight together against HUAC. When they are subpoenaed to the committee, Trumbo and his friend Arlen Hird (Louis C.K.) refuse to testify about anything, and they soon become unemployed and ostracized like many other blacklisted people in the town. They are also jailed for contempt of Congress, and they bitterly hear more bad news from HUAC while serving their time in prison.

When Trumbo is released, he accepts with resignation that nothing can really be done outside for a while, but he does not stop at all. He keeps writing screenplays, and his friend Ian McLellan Hunter (Alan Tudyk) willingly becomes the front writer for one of Trumbo’s screenplays which becomes the basis of a certain classic Hollywood film. Trumbo is also hired by the King Brothers Production, and its owners Frank and Hymie King (John Goodman and Stephen Root) do not mind about employing Trumbo and other blacklisted writers at all as long as Trumbo and his team quickly write or re-write heaps of screenplays for their cheap B-movies, though Trumbo and his colleagues still have to hide behind pseudonyms.

As Trumbo works for more than 15 hours every day under his constantly demanding schedule, he keeps pushing hard not only himself but also others close to him. His family have to move to a smaller house due to their economic difficulty, and they also have to work as his assistants while Trumbo concentrates on writing during every waking hour of his. As Trumbo’s long-suffering wife, Diane Lane does not have many things to do except showing her character’s admirable patience, and the same thing can be said about Elle Fanning, who plays Trumbo’s rebellious daughter who becomes as passionate about social issues as her father. 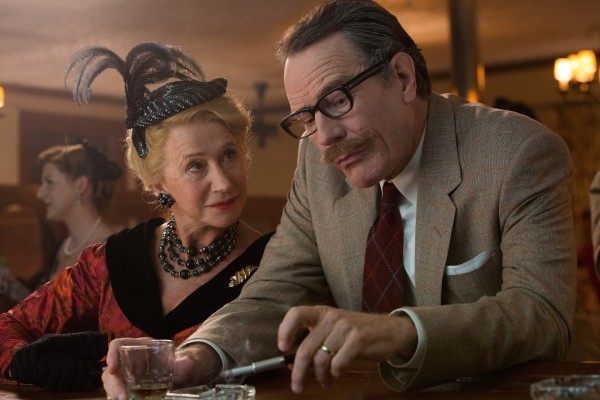 In the end, as some of you already know, things eventually get better for Trumbo. His screenplay for “The Brave One” (1956) wins an Oscar although the award officially goes to his pseudonym Robert Rich at the ceremony. Not long after Kirk Douglas (Dean O’Gorman) requests Trumbo to write the adapted screenplay for “Spartacus” (1960), Otto Preminger (Christian Berkel) visits Trumbo for himself, and Preminger’s film “Exodus” (1960) becomes a big blow to the blacklist along with “Spartacus” as both Douglas and Preminger stand by Trumbo and keep his name in their respective films.

This is surely a dramatic life story, but the director Jay Roach and his screenplay writer John McNamara, who adapted Bruce Cook’s biography “Dalton Trumbo”, fail to generate sufficient narrative momentum despite a good lead performance by Bryan Cranston, who did whatever he could do with his role and is recently rewarded with his first Best Actor Oscar nomination. Occasionally wielding his character’s wit or cigarette, Cranston is wholly prepared to show warts and all of Trumbo, but he is not helped much by the weak screenplay which monotonously trudges across the time span of more than 20 years. In case of its many historical inaccuracies pointed out by critics, I could overlook them easily because I usually respect artistic freedom in fiction, but the result is flat and unengaging with no particular new insight into Trumbo or that struggling period of him and others. Many scenes feel artificial in its mood and dialogue, and I became more annoyed by the frequent appearances of subtitle to remind us of the passage of time at every major plot turn.

Besides Cranston, “Trumbo” has a few good things to watch, and they make the film tolerable to some degrees. Louis C.K., who can switch himself easily between humor and pathos as shown from his TV comedy series “Louie”, shows a more serious side as a fictional character who is the composite of several real-life people, and Michael Stuhlbarg has a small bitter scene which reminds us of how many of us can be easily bent under social pressure. John Goodman delightfully chews his scenes as a brash movie producer who will not tolerate anyone who dares to interfere with his business, Christian Berkel keeps his face straight as your average stiff German filmmaker, and Helen Mirren is deliciously hateful as malicious Hollywood gossip columnist Hedda Hooper. Like Cranston, they all call for a better film probably buried somewhere inside this forgettable outcome, and that is a shame indeed. 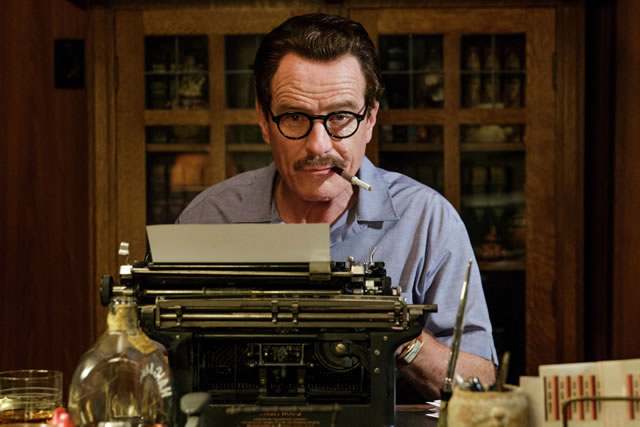