“The Man from U.N.C.L.E.” shows some potentials for better things to come, but, though it is not wholly without entertainment, it ultimately fizzles in the end due to its mediocre plot and weak characterization. The whole movie feels like being no more than an expensive TV pilot episode, and we can only hope that the people behind it may fix problems in the next time, though I do not think that chance will come very soon.

As a matter of fact, the movie is based on a popular American TV series of the same name from the 1960s. The TV series, which was broadcast during 1964-1968, was about many risky adventures of two agents working for a secret international agency called United Network and Command of Laws and Enforcement (U.N.C.L.E.), and Ian Fleming, who was riding on the success of James Bond novels and movies around that time, actually contributed to the main concepts of this TV series and its sibling series “The Girl from U.N.C.L.E.”, which lasted only for one season in contrast.

The movie version tells us how its two main characters come to work together despite their opposing positions as soldiers of the Cold War. It is the early 1960s, and the opening sequence shows us when CIA agent Napoleon Solo (Henry Cavill) and KGB agent Illya Kuryakin (Armie Hammer) happen to come across each other while both of them reach for the same target at the same time. The target in question is Gaby Teller (Alicia Vikander), a young car mechanic living in East Berlin. She is the only daughter of a German scientist who was recently vanished right before completing his research on an advanced uranium enrichment technology in US, and she may help finding her father – and his priceless technology wanted by both CIA and KGB. 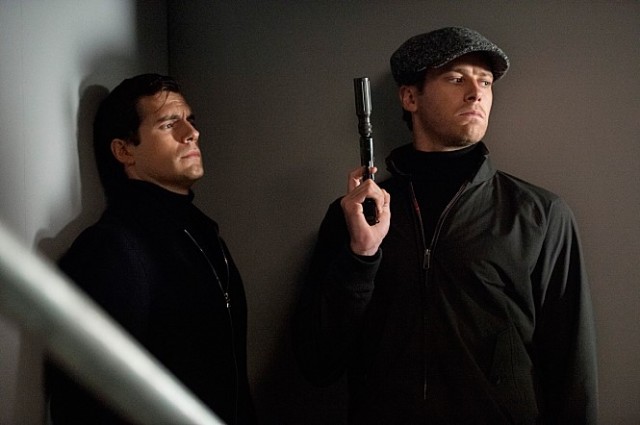 Although their first encounter in East Berlin is not pleasant to say the least, Solo and Kuryakin soon find themselves working together as ordered by their respective bosses. It turns out a secret organization involved with Nazi criminals is behind the disappearance of Teller’s father, and it a matter of time before this criminal organization uses his uranium enrichment technology for threatening the world. Accompanied with Solo and Kuryakin, Teller will go to Rome for introducing her Russian ‘fiancé’ to her uncle who has been working for the front business of the organization, and she is willing to take a risk for finding her dear father.

Not so surprisingly, Solo and Kuryakin do not get along well with each other, and the constant friction between this mismatched duo is the main source of comedy in the film. Solo’s laid-back attitude frequently clashes with the utmost seriousness of Kuryakin, and they keep being watchful about each other as before because, well, old habits never die. After all, they will be enemies to each other again once this joint operation is over, won’t they?

As they get closer to their target, the director/co-writer Guy Ritchie, who previously directed “Sherlock Holmes” (2009) and its following sequel, throws a number of action sequences into the film, but we do not get much thrill or excitement from them as the movie plods along its loose narrative which is often too relaxed and sluggish. While it is decorated with lots of glamor and style you can expect from the 1960s on the screen, there is not much sense of urgency or tension throughout the film, and that problem is evident even during the climax part, which is often disorienting in its busy and flashy presentation of actions as heading toward its predictable ending.

Henry Cavill and Armie Hammer are suitably cast as slick agent heroes with contrasting appearances, but their performances are not fun or interesting enough to float their film. It is surely nice to see Cavill in a less ponderous role after “Man of Steel” (2013), and he initially looks promising as Solo confidently improvises his moves against his chasing opponent during the opening sequence, but then the movie does not give him many things to do besides looking wily, dapper, and resourceful as a former professional criminal recruited by CIA. In case of Hammer, he keeps his performance straight as demanded even during the silliest moments in the film, but then he is stuck with the thankless job of playing a humorless straight man with some Freudian anger management problem.

The supporting performers are also wasted in their disposable roles, though some of them end up leaving a bit of good impression as reminding us of their considerable talents. Alicia Vikander, who was unforgettable as an alluring artificial intelligent character in recent SF film “Ex Machina” (2015), looks fabulous in those fancy period costumes in the film while showing some tough sides, but then her character ultimately functions as a damsel in distress to be saved around the climax part, and the possible romantic relationship between her character and Hammer’s does not feel that engaging especially if you consider that sparkling chemistry shown between Tom Cruise and Rebecca Ferguson in “Mission: Impossible – Rogue Nation” (2015). Although her bland villain character is not so memorable or menacing, Elizabeth Debicki has a little fun with her scenes with Cavill, and Hugh Grant gets the most fun as a small but crucial supporting character who appears later in the story.

While I did not like “Sherlock Holmes” enough, I was mildly entertained at least, and I hoped there would be improvements in the next film, which was indeed a better one. “The Man from U.N.C.L.E.” also gives me a similar impression for its potentials, but it will be probably forgotten quickly because of several notable spy movies which came out in this year. In comparison, “Spy” (2015) was much more hilarious, “Mission: Impossible – Rogue Nation” was much more exciting, “Bridge of Spies” (2015) was much more compelling while also more humorous in fact, and then there comes “Spectre” (2015), a new James Bond movie. “The Man from U.N.C.L.E.” comes with a style indeed, but it sadly forgets that it needs more than a style to become something substantial enough to be remembered.

This entry was posted in Movies and tagged action, Cold War, Spy. Bookmark the permalink.