As a thriller literally unfolded within one laptop screen during most of its running time, “Open Windows” is more entertaining than expected. Its storytelling device is an apparent gimmick to say the least, but the movie uses it to full effect with several nice ideas for its increasingly preposterous thriller plot, and the overall result was good enough for me to forget its gimmick and overlook many ridiculous things during my viewing. This is a thriller film which will not hold itself well if you look closely at its shaky plot after it is over, but it does work at least during its thrilling storytelling stunt, and it is surely fun to watch how it keeps digging up new thrills and surprises from its Hitchcockian premise with a stylish touch a la Brian De Palma.

The laptop in question belongs to Nick Chambers (Elijah Wood), a young man who has run a fansite of Jill Goddard (Sasha Grey). He recently won the blogger contest for a chance to meet and have a dinner with his favourite actress, and now, after arriving in Austin, he is waiting in his hotel room while watching Goddard and others in the press conference being held right in the same hotel for her latest film.

When the press conference is approaching to its end, Chambers gets a strange call through his laptop. Introducing himself as a campaign manager, Chord (Neil Maskel) notifies to Chambers that the meeting happened to be canceled, and then this mysterious man begins to lure Chambers into something a devoted fan like Chambers cannot easily resist. Through Chord, Chambes gets a chance to watch Goddard more closely than before, and then he even comes to peep into her private secret during the moment which is clearly influenced by Hitchcock’s classic thriller film “Rear Window” (1954).

Of course, it soon turns out Chord has a sinister purpose behind this seemingly harmless voyeuristic service, and Chambers suddenly finds himself trapped inside Chord’s diabolical plan. While it is quite possible that he may not get out of this trouble alive, Chambers does not see any other possible option besides following Chord’s orders, and the situation becomes more difficult for him as he is pushed further with his every move coerced by Chord.

As I said above, nearly everything in the film is shown within Chambers’ laptop screen, and the director/writer Nacho Vigalondo keeps the situation rolling with style and confidence. Even when Chambers has to get out of the hotel, the tension is maintained well as the movie skillfully juggles various viewpoints shown on his laptop screen, and the result is something to be appreciated by the fans of Brian De Palma’s thriller films. Vigalondo sticks to his gimmick even when the movie shifts its gear into action mode during one exciting action sequence around the climax part, and it surely helps that those small webcams prominently featured throughout the film provide fairly good video quality thanks to technological advance.

And things in the film become all the more outrageous in a way I do not dare to reveal to you. Through a rather unbelievable coincidence, Chambers comes to learn more about his ominous opponent who is gradually revealed to be as twisted as those deranged killers in Giallo films (did I mention that he has black leather gloves and a shiny big knife besides his unrealistically awesome hacking ability?), and, yes, he is going to do something very, very bad to Chambers’ favourite actress – and it goes without saying that Chambers will also be his other victim in the end if Chambers does not find any chance to turn the table in this perilous situation.

And you may notice that many things in the movie do not make sense at all as you think more about them after the movie is over. While losing some of the tension accumulated during the first two acts, the third act is utterly implausible as generating many logic holes here and there in the plot, and you may not like a major surprise which will instantly make you look back at the whole story and then scratch your head for its sheer implausibility.

Nevertheless, the movie works thanks to Vigalondo’s taut direction which holds everything in his film together even when it becomes quite shaky while being on the verge of collapse. We begin to sense his wily manipulation behind the screen more and more through many plot contrivances solely existing for pushing the story forward, but it is always accompanied with humor as well as suspense, and we sort of come to accept its unabashed embrace of preposterousness.

As being more or less the components of its plot, the main actors in the film keep their performances straight and functional as demanded. Wood, who incidentally went through a very similar situation in another equally outrageous thriller film “Grand Piano” (2014), functions as the center we can hold onto as the plot keeps going through more twists and turns, and Sasha Grey gives an adequate performance while testing her acting ability during a couple of crucial scenes in the film. Neil Maskell is effectively vicious with his bullying voice, and his unseen presence functions as one of the main sources of the suspense in the movie.

Vigalondo previously made “Timecrimes” (2007), which I enjoyed for how it played with its tricky science fiction premise within a very small scale. While “Open Windows” looks confined within its premise at first, it plays well within its limited space despite many moments in the need of suspension of disbelief, and it accomplishes its goal with enough entertainment to compensate for its noticeable flaws. It is not without problems, but it is one hell of loony joyride to be appreciated for its undeniable skill and style covering its total nonsense. 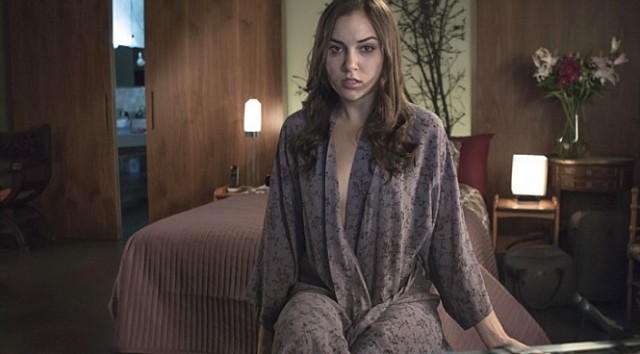 This entry was posted in Movies and tagged Hacker, Internet, Thriller. Bookmark the permalink.