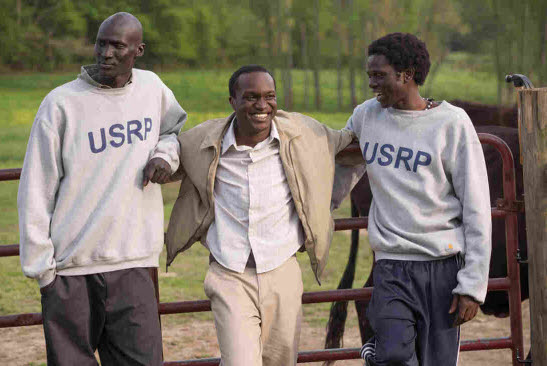 “The Good Lie” approaches to its simple story with not only good intention but also honest attitude, and that is a good thing. While it is partially about the kindness of strangers, it is mainly about how its outsider characters try to settle in a safe but alien world after many difficult years of theirs, and their long, hard journey from Africa to America is touchingly presented with empathy and understanding even when the story becomes a bit maudlin during its second half.

At the beginning, we get the brief background information on the tragic modern history of Sudan. Not long after its first civil war during 1955-1972, Sudan was tumbled into another civil war between the North and South regions in 1983, and this war was continued until the peace agreement in 2005, which led to the independence of South Sudan in 2011. During this long, brutal civil war, at least 2 million people died, and thousands of orphaned children had to flee from their villages and then endure their long, grueling journey on foot until they reached to the refugee camp in Kenya.

While its main characters are fictional, what they go through during the first part of the film is based on that unfair ordeal those unfortunate Sudanese kids experienced during the war. When they are having another usual day with other kids, their village is suddenly attacked by soldiers, and they and several other orphaned kids manage to escape from the village while many others including their parents are killed during the attack. They know they have to go south for their survival, and that is the beginning of their long, harrowing journey which strikes them hard with danger and despair. While they have to endure hunger and dehydration during their journey, they can be suddenly attacked by soldiers at any point, and there is a striking scene in which they must swim across the river as dead bodies are being carried down the river. 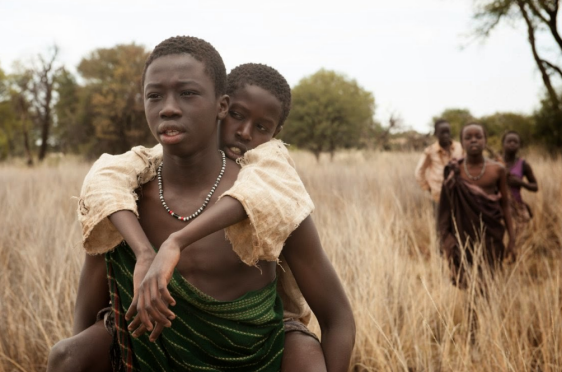 Not all of them finish this journey in the end, and that remains as a painful memory to Mamere (Arnold Oceng), Jeremiah (Ger Duany), Paul (Emmanuel Jal), and Mamere’s sister Abital (Kuoth Wiel) even when they grow up to be adults after 13 years. It is 2001, but the war is still being continued in their home country as before, and they have been stuck for years in the same refugee camp they arrived at when they were young. They have dreamed of going to America someday, but they just only hope for that like many others in the refugee camp, and all they can do is wishing that their names will appear on the next notice to be put onto the board.

As shown during the opening scene, their dream eventually comes true on one day, and they happily board their plane to America, but then they come across one problem right after they arrive at the airport. Due to the recent regulation changes, Abital cannot stay with the boys, and she is sent to Boston to live separately while the boys are sent to Kansas City.

While hoping that there can be a way to bring Abital back to them, Mamere, Jeremiah, and Paul start their first day in Kansas City, but, not so surprisingly, it takes some time for them to get accustomed to the new world they have never experienced before, and many of little humorous moments in the film come from their awkward encounter with mundane things in American daily life. At one point, they look at a plate of big green jello while not having any faintest idea on what to do with it, and they do not even know what telephone is. There is always something to learn during every day of their new life in America, and their innocent inexperience sometimes causes bafflement to others around them.

One of them is Carrie (Reese Witherspoon, who admirably dials down her usual perky presence with her dyed brunette hair), a social worker who met these boys for the first time when she was asked to go to the airport for taking them to the staying place prepared for them. All she has to do is merely providing job opportunities to these outsiders from Sudan, but then she comes to care about them more than before as getting to know about them and their hard past, and she tries to help them more along with Jack (Corey Stoll), a kind local farmer who gladly lets the boys have some nostalgic comfort through his cows in the farm.

Because Witherspoon’s name is placed first in the cast list, you may think her character is going to take the center of the story, but the screenplay by Margaret Nagle is too thoughtful to allow that happen, and the movie continues to focus on our Sudanese boys as observing each own personal struggle. While they are living more comfortably than ever, they are still haunted by the memories of their past, and they all miss Abital, who can contact with them over the phone but cannot come over to their place yet because the US government has become more strict on foreigners after 9/11.

Calmly unfolding the story on the screen, the director Philippe Falardeau, a Canadian director who received acclaims through his quiet but touching Oscar-nominated film “Monsieur Lazhar” (2011), draws good performances from his cast mainly consisting of relatively unknown actors, and they imbue authentic natural quality to their characters. As shown during the end credits, Ger Duany and Emmanuel Jal were child soldiers during the second Sudanese civil wars who were fortunate enough to survive and find new home later, and I heard that the child actors playing orphaned characters during the first half of the film are actually the children of real Sudanese orphans who went through similar hardships during the war and then were relocated to US later like the main characters in the film.

While its second part accompanied with a couple of melodramatic turns is less successful than its more powerful first part, “The Good Lie” does not resort to cheap tears at all, and it instead earns its expected emotional moments as maintaining its restrained but sincere attitude. The overall result may be modest, but it is still moving none the less with its big, humble heart beating at the center of the story.