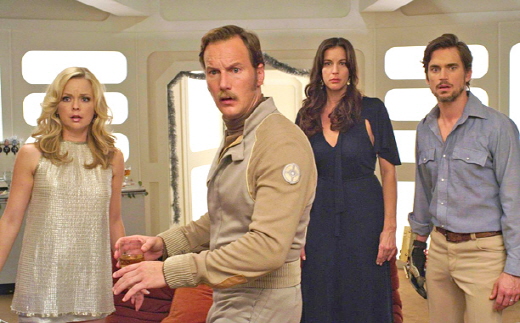 If you have ever had a guilty pleasure moment with those dated SF films from the 1970s, “Space Station 76” may appeal to you to some degrees as an one-joke space comedy which tries to hang its tongue on the cheek while trying to keep its straight face as much as it can in its retro style. The movie deliberately looks corny, and I am sort of amused by its intentional cheesiness, but this mildly funny pastiche feels so straight in its dry mood that it sometimes looks quite humorless as losing its way somewhere between homage and spoof.

Its story is unfolded within a space station located somewhere far, far away from the Earth. As told to us through the opening narration, the human race has advanced into many corners of the universe in the distant future, and it is the main job of Captain Glenn (Patrick Wilson) and others at this space station to take care of the intergalactic traffic around their area as providing fuel and other various services like those rest areas on highways.

Despite such technological advances, it seems the humanity in this world has unfortunately been stuck in the mentality of the 1970s. While it surely looks like a nice-looking model on the outside, the space station looks hilariously tacky in the inside thanks to its clean, bright white interior design which will certainly make some of you feel nostalgic about many old SF films from the 1970s, and its inhabitants look and behave as if they were American middle-class suburban people during that era. Bored with their eventless daily life, some of them look for a way to deal with their ongoing ennui in the middle of the space, and we get several silly moments involved with Dr. Bot (voiced by Michael Stoyanova, who co-wrote the screenplay), a cute little psychiatrist robot who flatly delivers those superficial words based on the popular psychology of the 1970s whenever his patients want the advices for their personal problems. 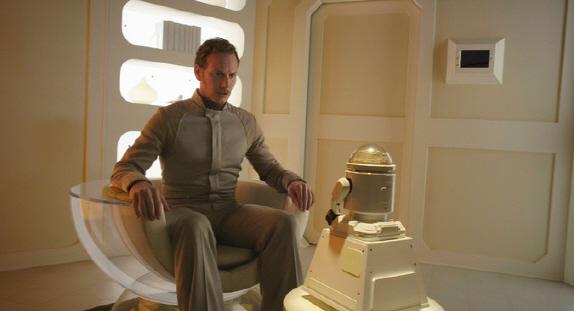 Meanwhile, a new crew member has recently arrived at the space station as Captain Glenn’s new second-in-command. Still feeling sour about the recent departure of her predecessor for some reason, Captain Glenn does not welcome Jessica (Liv Tyler) much, but this kind, gentle, and dutiful woman keeps her composure as trying to do her duties under her grumpy boss who gets frequently drunk even during his work hours.

While she goes through her first days at the space station, we meet the other characters who have lived here for years. Its chief mechanic Ted (Matt Bomer) and his self-absorbed wife Misty (Marisa Coughlan) have been estranged from each other, and Ted sometimes enjoys his own naughty space fantasy during his spare time while his wife is having an affair with Steve (Jerry O’Connell), who does not mind having a little fun while looking forward to leaving the space station someday with his wife and their newborn child (and his mother under cryogenic care). Misty and Ted have a little daughter named Sunshine (Kylie Rogers), and this lonely girl who had no one to hang around with is glad to befriend Jessica, who also likes Sunshine a lot as regarding her like a daughter she will never have.

As the characters slowly rotate around its loose plot, the movie throws various silly details onto the screen as small and big visual gags. The ‘futuristic’ technologies shown in the film may tickle you for good reasons (do you remember when is the last time you used videotapes?), and its cheap special effects look as unrealistic as you can expect from a dated SF film made during the 1970s, and its production design and costumes further emphasize its retro style along with corny dialogues.

This looks like a fertile ground for satire, but the movie frequently feels like a languid exercise in cheesiness while merely setting up its background. I understand that it is not intended as something as hysterical as “Spaceballs” (1987), but its thin plot aimlessly plods around its background like a lame soap drama episode, and its cardboard characters become far less funny once we get past its joke on their one-dimensional silliness. They look ludicrous as intended, but there is not much else besides that, and we do not care or worry much about them even though the movie keeps warning us of an approaching asteroid at least more than 5 or 6 times during its short running time.

The actors know that it is the best to act straight with all these ridiculous materials given to them, and they did their job well as demanded. While Patrick Wilson effectively sets the tone right from his first scene, Liv Tyler maintains her gentle grace intact as holding herself well in front of many silly moments, and Matt Bomer brings sly humor into his character while looking sincere and daunted all the time. There is one funny scene in which Jessica and Ted try to deal with their growing mutual feelings during their private conversation, and Tyler and Bomer did an admirable job of looking very serious as their characters awkwardly try to handle an embarrassing happening involved with Ted’s rather problematic prosthetic hand.

“Space Station 76” is not entirely without humor, but it is an one-joke stretched a little too long for me. Although I was not that bored thanks to some nice comic touches including a humorous cameo appearance by Keir Dullea, who played one of the main characters in “2001: A Space Odyssey” (1968), I frequently felt impatient even while appreciating the efforts put behind the screen by the director/co-writer Jack Plotnick and his crew. In spite of having everything ready to be spoofed, the movie somehow never feels like going on a full-throttle mode which would have made it into something more memorable, and we only watch it passing by us while nothing happens much in the end.

This entry was posted in Movies and tagged Comedy, Space. Bookmark the permalink.