As revisiting French action thriller film “Point Blank”, I thought about how familiar a certain thriller premise is. In many thriller films like this one, an ordinary guy suddenly finds himself being blackmailed to do something not so good while the clock is ticking toward the deadline put upon him, and he must do that as soon as possible – or he will lose his loved one being held as hostage by bad guys.

I also wonder about whether such a scheme can actually work in real life, but this is indeed a nice thriller premise to be recycled again and again, and “Point Blank” recycles it well enough for our brief entertainment. While there is nothing new to impress seasoned audiences like me in the movie, that does not mean that I was bored while watching it. Its story may be a little too thin to distinguish itself from other countless action thriller films I watched before, but it nicely works with efficiency and speed like a well-oiled machine, and its short running time(84 minutes including the end credit) quickly passes as it runs along several good action sequences.

The ordinary hero in this case is Samuel Pierret(Gilles Lellouche), a young married nurse who has been leading a plain but happy life when all hell breaks loose upon him on one day. After incidentally saving an unidentified patient at the hospital, someone breaks into his apartment in the next morning, and Samuel faces a very difficult situation when he regains his consciousness after being hit on his head by that intruder. His dear pregnant wife Nadia(Elena Anaya) has been kidnapped, and the kidnapper soon demands him to get that mysterious patient out of the hospital in exchange of his wife.

As shown to us during the opening chase sequence, that patient is a man chased by some guys, and we later learn that he is also a criminal pursued by the police. That makes the situation more difficult for Samuel, but he knows he must do anything to save his wife, and he finds himself committing things he has never imagined before. When he sees there is no alternative for him at one point, he makes a pretty bold move, and that is just the beginning of his risky plight.

Now I should be more careful about describing the movie to you because I do not want to spoil your entertainment. As the movie gets accelerated during its first act, we are introduced to several supporting characters whose main function in the story is chasing after Samuel and the patient, and each of them has a good motive behind their pursuit. Although he is still a patient barely recovering from his wound, Hugo Sartet(Roschdy Zem) is a tough criminal determined to survive by any means necessary, and we can sense a certain amount of tension growing between him and Samuel as they try to evade the pursuit. They cannot trust each other for good reasons, and both of them are ready to take any chance for getting more advantages.

As maintaining its quick pace, the director/co-screenplay writer Fred Cavayé keeps his movie rolling along the plot. There are a couple of obligatory scenes for explaining the ongoing circumstance to us, but the movie seldom loses its urgency. The action sequences in the film are briskly handled as the characters run or move a lot, but they never feel confusing because we are well aware of where the characters are and where they are heading to. There is a ferocious sequence which begins from one small place in some building and then is eventually expanded to a wider space outside the building, and the main pleasure of this sequence is how smoothly it is progressed from one point to the other point along with the characters in it. 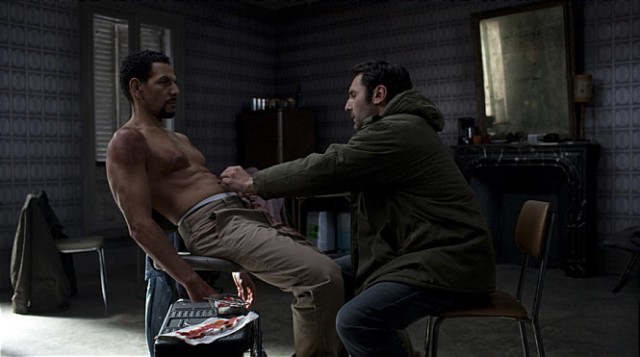 The main job of the actors in the film is always looking believable in their scenes, and they did it well on the whole. Gilles Lellouche does not lose his everyman quality even when his character does a perilous action between two buildings(I dearly hope I will never be forced to do such a thing like that), and Roschdy Zem is also effective as a contrasting figure in the story. While initially antagonizing with each other, Samuel and Hugo eventually depend on each other for their mutual survival in the end, but the movie never overplays their reluctant partnership; they just happen to have no choice other than that, and that is all as far as we can see. As Samuel’s wife, Elena Anaya does a little more than merely playing a helpless captive(one of her scenes may not be easy to watch for pregnant audiences), and Gérard Lanvin, Mireille Perrier, and Claire Pérot are all convincing as substantial police characters.

When I watched the film in late 2011, I gave it 2.5 stars in spite of its commendable aspects because I thought it was just another plain action thriller film to be watched and discarded. That impression is not changed much even at this point, but I come to more like its economic handling of story and characters, and I also find that its well-made action sequences are still enjoyable to watch. It is not an excellent one to be sure, but it is a competent one made by the people who really knew what they were making.

By the way, I recently learned that the upcoming South Korean film “The Target”(2014) is a remake version of “Point Blank”(yes, that was the main reason why I watched it again). I only encountered its trailer, and I do not have lots of expectation for this remake version which is considerably longer than the original version, but I’d rather keep my mind opened before watching it.

This entry was posted in Movies and tagged Crime, Criminal, Husband and Wife, Murder, Nurse, Police, Thriller. Bookmark the permalink.