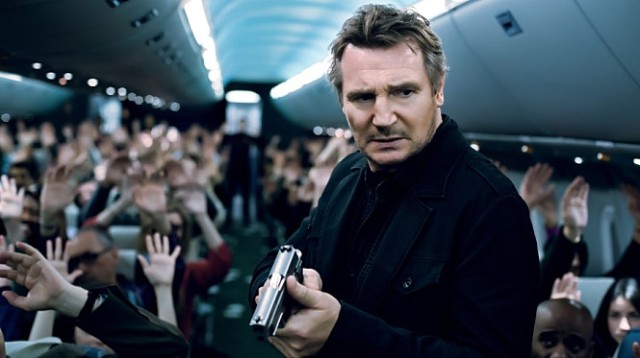 One thing I miss about Roger Ebert is his witty amusement with action thriller movies which are full of preposterous plot holes big enough for a Boeing 777 plane to fly through. He did not point them out just for blasting them in his reviews; he was sometimes entertained by their dumb plot devices and typical clichés even when he did not like them enough, and he frequently made fun of them with sharp wits in his reviews. I savored many of them whenever I encountered them, and I actually wanted to watch those films to share the fun with him as a fellow movie audience(and I usually did, by the way).

“Non-Stop” is one of such outrageous action films, and I believe it would tickle him to some degrees because of its breathless preposterousness decorated with many colorful goodies from his little movie glossary. Besides a bunch of stock characters who would be at home in Airport movies, we also have a typical flawed hero struggling with his personal demon and bound to be fallen into a deadly trap waiting for him, an insidiously goofy scheme which does not make lots of sense at all as you think more about it, an obligatory third-act scene which was once termed ‘underlying reality speech’ by Ebert, and, above all, that infamous thriller cliché which will amuse any seasoned movie audience in the world – RED DIGITAL READOUT!

And, believe or not, there are more than one digital readout in the movie. At one point, the hero is notified through a smartphone that the bomb will explode after 30 minutes, and then the digital readout kindly appears on the screen and is immediately activated. So, I guess it is never expected that our hero will find the bomb hidden in the plane, but then why does it have to be equipped with that red digital readout from the beginning? As a matter of fact, even we do not need that at all because our hero has a digital wristwatch which can function as a timer as well as mine.

Let’s talk about the story itself, which is not so convincing even if you are willing to suspend your disbelief which will rapidly be accumulated minute by minute. Our hero is a federal air marshal named Bill Marks, and we instantly see that this gloomy tough guy is going through very, very hard time thanks to the natural gray gravitas exuded from Liam Neeson’s performance. Neeson has recently been our man for all those gritty B-action flicks since he appeared in “Taken”(2008), and you may admire how this talented 61-year-old actor still looks believably forceful and vulnerable even in his routine paycheck roles like this. You can’t possibly mess with Neeson under any circumstance, you know.

While getting to know a bit about his personal problems including alcoholism and his young daughter, we are also introduced to several supporting characters who board on a plane to London with him, and lots of possibilities are spread around them even before the plane takes off. When you have a prominent actress like Julianne Moore as a woman who just happens to sit next to Neeson, it does not take a second for us to guess that her character will be one of the crucial elements in the story no matter what happens in the end, and there are some recognizable performers including Scoot McNairy, Michelle Dockery, Corey Stoll, Nate Parker, and Lupita Nyong’o, a beautiful newcomer who worked in this film right after her heartbreaking Oscar-winning performance in “12 Years a Slave”(2013) and will probably not get roles more inconsequential than this in her bright future career.

Everything looks like his ordinary work day to Marks at first, but, around two hours after the takeoff, he receives suspicious text messages through his secure smartphone. According to the messages, a passenger will be killed right after 20 minutes, and that will happen again every 20 minutes unless $150 million is transferred to a certain bank account. The others including the pilot do not take this anonymous threat seriously, but Marks intuitively senses that he and others are placed in a very dangerous situation, and, of course, he is right about that.

The director Jaume Collet-Serra, who previously collaborated with Neeson in another highly improbable action thriller film “Unknown”(2011), maintains the tension fairly well during the first two acts despite many illogical aspects nearly making his film crash into the ground. As announced through those ominous texting messages, some of the characters on the plane meet unfortunate end as the clock is ticking, and we even get a classic case of closed-room mystery which looks quite impossible if we rule out a person sitting right next to the victim at the time of the death. 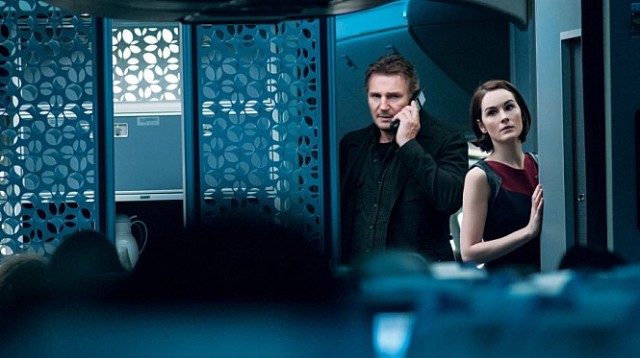 And Marks finds himself cornered into a very difficult situation as realizing that he is being manipulated and framed as a key part of the plan. The bank account turns out to belong to none other than Marks himself, and he is soon labelled as a dangerous and unstable hijacker by the media, and the passengers do not trust him much mainly due to his abrasive and coercive approach in the investigation, though many of them temporarily drop their suspicion when Marks promises them one-year free pass for international lines from his airline company.

Around its third act involved with the aforementioned bomb and predictable action climax(this is not a spoiler at all if you have watched its trailer), the movie eventually gets messy as going through its crash course along with the plane, and even its ‘underlying reality speech’ moment does not do much of service to us except 1) revealing a shaky plan depending a lot on coincidence from the beginning to the end and 2) giving Marks more chance to prevent the approaching moment of doom for him and his fellow passengers as a certain character wastes precious remaining time on confessing a motive behind the plan.

“Non-Stop” has some good scenes which work well, and I often found myself amused by its brash attitude to its sheer ridiculousness peppered with clichés, but it is not engaging enough for me to embrace its implausible aspects. I have always thought Liam Neeson was too good for his recent B-action movies, but it goes without saying that he brings some class to them, and he is dependable as before while effectively selling many scenes in the film including Marks’ sincere interaction with a little sick girl. As shown in his absolutely hilarious voice performance in “The Lego Movie”(2014), this Irish trouper is still capable of many other things, and I sincerely hope he will get more chances to do far more acting than he did in this passable action film.