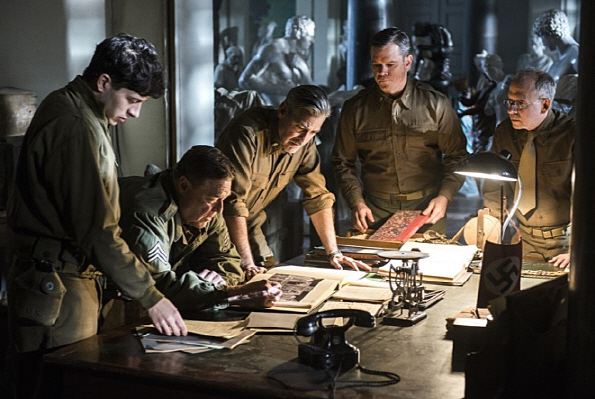 As the biggest war during the 20th century, World War II still has many interesting stories to be told even after so many books and movies about it came out, and the story told in “The Monuments Men” is surely a curious one. Inspired by a real-life story about the special military unit which tracked down and saved many valuable artworks from being stolen or destroyed during the war, the movie follows the several fictional main members of that unit, and its episodic narrative gives us some enjoyable moments as they roll around the Europe continent for their duties. Although the story feels flat and unfocused at times mainly because it tries to deal with too many things within 2 hours, its subject is still an interesting one deserving to be told, and the movie accomplished its mission to certain degrees at least while managing not to make us bored.

The story begins around 1943, when the Allies were beginning the first forward step against Germany and Italy in Europe. As the amount of collateral damages resulted from the war is increased along with more battles around the Europe continent, Frank Stokes(George Clooney), an American art conservation specialist who is loosely based on George L. Stout, has a reasonable concern over many important artworks in Europe which can be lost forever during the ongoing war. They have a good chance of winning the war, but, as Stokes points out during his private presentation in front of President Roosevelt and his advisors, they may permanently lose invaluable cultural assets even if they get the victory in the end, and he passionately emphasizes the need to protect them for human civilization.

After getting the permission for his proposed operation, Stokes brings various experts into his special military unit. His colleague James Granger(Matt Damon) is the first guy to join the unit, and then we meet the other members one by one as they are recruited by Stokes: Walter Garfield(John Goodman), Richard Campbell(Bill Murray), Preston Savitz(Bob Balaban), Jean Claude Clermont(Jean Dujardin), Donald Jeffries(Hugh Bonneville), and Sam Epstein(Dimitri Leonidas), a young private who later comes to work for Stokes as his driver and German translator. 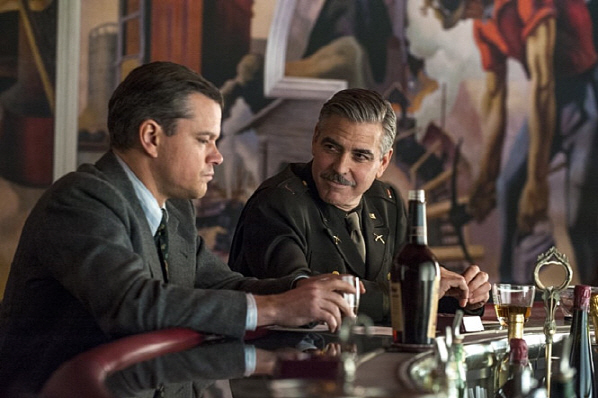 They arrive in France not long after the invasion of Normandy in 1944, and they soon find that their missions are not so easy to be accomplished. While the combat units on their own side are not very cooperative because securing artworks is not their first priority on battlefield, the German army takes away a huge amount of valuable paintings and sculptures during their retreat, and, to make the matters worse, Hitler orders his men to destroy all of these priceless artworks if Germany loses the war. During one brief moment, we see some of them burned together by German soldiers, and their remaining ashes sadly remind us of how much damage war can inflict on human culture.

Stokes and his men, nicknamed “The Monuments Men” by others, try their best as respectively doing their assigned missions. In case of Granger, he goes to Paris as soon as the city is liberated, and he meets Claire Simone(Cate Blanchett), a gallery curator who was forced to oversee the looting by the German Army during the occupation. Although she may help Granger through her personal records she has been keeping just in case, she is understandably suspicious of him due to her difficult experience during that time, and it is his job to convince her that he and his unit really want to track down those stolen works for having them returned to their original owners.

Meanwhile, Campbell and Savitz work together to track down the Van Eyck altarpiece looted from Ghent cathedral, and we see comradeship gradually growing between them despite their personality differences. While Bill Murray is amusing as usual in his typical detached mode, Bob Balaban is a good counterpart to Murray, and they have a nice scene when their characters happen to find themselves in an unusual situation during one dark night. 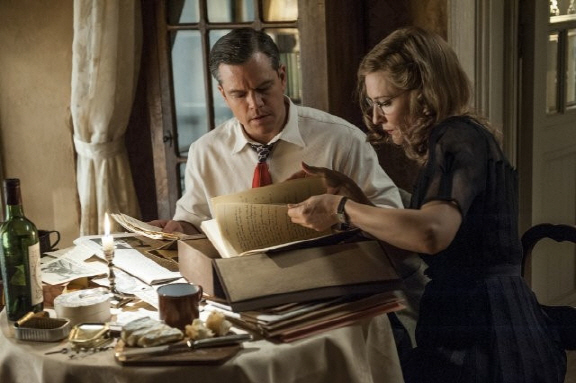 As a jovial beefy sculptor and your average merry French guy, John Goodman and Jean Dujardin, who previously worked together in Oscar-winning film “The Artist”(2011), also bring some humor to their scenes. Although Garfield and Clermont are mostly not around the front lines, they are still within the war zone like their colleagues, and there is an amusing moment when they finally confront a sniper who scared the hell out of them through his sudden ambush.

Based on “The Monuments Men: Allied Heroes, Nazi Thieves and the Greatest Treasure Hunt in History” written by Robert M. Edsel and Bret Witter, the screenplay by the director George Clooney and his co-screenplay writer/co-producer Grant Heslov somehow keeps its balls rolling along their separate plot lines, though it eventually loses its momentum and interest during its second half. The story feels loose and jumpy as it frequently shuffles between too many things including the Soviet Army unit eager to grab the stolen artworks as their loots, and its ‘climax’ part feels a lot like an obligatory scene inserted to finish the story with some action and thrill.

While it remains disappointing as a passable film which does not hold its nice elements together well, “The Monuments Men” is not a boring experience, and it has good moments including a big surprise the characters come across in one of the mines where many stacks of art treasures are hidden by the German Army. I liked how Blanchett finds a way to play her functional character engagingly, and I also enjoyed Alexandre Desplat’s colorful score which ably supports different moods in the film(he also appears as a minor character in the movie, by the way), and the other technical aspects of the film are as good as you can expect from a Hollywood period drama movie. You will not have a bad time with it, but I think you will soon forget about most of it – even while appreciating an interesting historical fact reflected in the film itself. 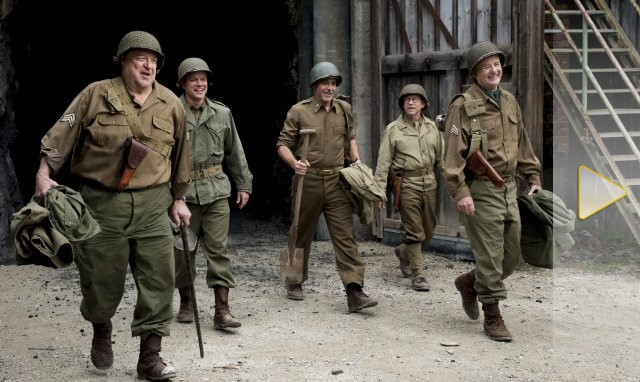