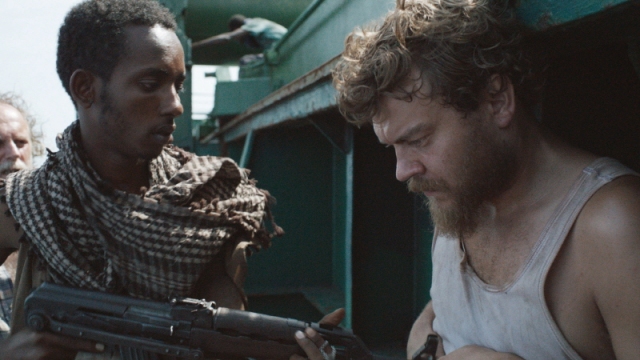 “A Hijacking” presents us a long, exhausting process of hostage negotiation with its plain but tense realism, and it is an absorbing experience. While there is no big action scene or heroic act to excite us, we closely watch the ordinary people struggling and sweating in their difficult and dangerous situation, and their desperation and frustration is palpable on the screen. They become more tired as the time goes by, but they must wait and be careful as dealing with a bunch of violent thugs.

Day 1 of the story opens with the daily routine of the crew members inside one Danish cargo ship sailing on the Indian Ocean. We see Mikkel Hartmann(Pilou Asbæk) having a personal conversation on the phone with his wife and kid, and then we also meet the other crew members including the captain and Mikkel’s friend Jan Sørensen(Roland Møller). Mikkel works as the cook on the ship, and we sense jolly amity between him and others as they are sailing toward Mumbai under the fine weather.

Meanwhile, in Copenhagen, Denmark, the CEO of the shipping company is going through his usual business schedule. After discussing with other company executives on business strategy during their morning meeting, Peter C. Ludvigsen(Søren Malling) goes right to a negotiation meeting with the other company. We can see that this calm middle-aged businessman is good at dealing with others; when he sees that the negotiation is going nowhere, he gets out of the room as if he had nothing to lose from a possible rupture, and the people at the opposition eventually accept his final offer in the end.

Not long after that, an urgent news is reported to Peter while he is working. One of their ships has lost contact with the company, and it seems that the ship is hijacked by Somalian pirates. While their infamy is considerably decreased at present due to more national security/military measures for protecting cargo ships, Somalian pirates had been notorious for many incidents of hijacking and pillage during 2008-2011, and you have probably heard about their hijacking incident from the media at least once. 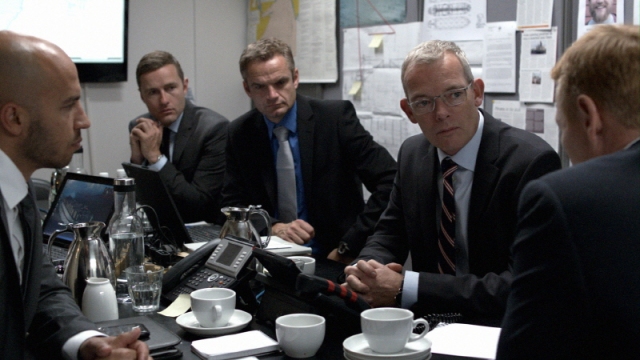 The ship is indeed hijacked, and, while they are mostly all right, Mikkel and his shipmates are held as the hostages by the armed Somalian pirates successfully occupying the ship. Their representative Omar (Abdihakin Asgar), who emphasizes that he is not associated with the pirates but is taken to the ship just because he can speak English, contacts with the company, and he delivers the pirates’ demand of $15,000,000 ransom.

As soon as he is reported about the ship, Peter quickly holds an emergency meeting. In such a situation like that, we may imagine of him and others gathering in a fancy briefing room filled with monitors and other high-teach equipments, but the people including a negotiation expert Connor Julian(Gary Skjoldmose Porter) gather in a plain-looking meeting room instead. While one wall is covered with the profiles of each crew member, a big white board on the other wall is used for summarizing the progress in their ransom negotiation.

As an experienced expert, Connor advises Peter not to deal directly with the representative of the pirates because of his possible emotional involvement which may disrupt the process, but Peter has already decided to handle the situation for himself as the CEO of his company. With Connor at his side, he offers a far less ransom($250,000) as advised by Connor, and then he and others slowly proceed to the next steps.

While going back and forth between Denmark and Somalia, the movie usually focuses on only one side rather than intercutting between both sides during the negotiation scenes, and the tension on the screen is slowly increased as Peter and others struggle with this difficult negotiation. The days keep passing by, and they become more frustrated while trying to lower the ransom at any chance, and Omar is equally frustrated while trying not to lower the ransom in any case. Regardless of whether he is really associated with the pirates or not, we later see how much he feels tired and nervous during his scene with Mikkel. He may have an advantage through hostages, but the pirates will not get money if he pushes too far and the negotiation is ruptured as a consequence, and he seems to be afraid of that dire possibility.

In case of Mikkel and other hostages, they are desperately waiting for release. Their stuffy predicament may be over at any time, but the time feels far longer than before, and the day they wish for seems to be beyond their reach. At least they come to have some moments of respite while getting a little friendly with Somailan pirates, but that does not change the grim fact that they are hostages and captors. Somalian pirates can be a merry band of thugs for a while if they want, but they are still dangerous guys with guns, and there is an emotionally shattering moment for both Mikkel and Peter when the mood of the negotiation becomes more aggressive than before.

The director/writer Tobias Lindholm actually shot the film in Denmark and Somaila(the actors in Denmark really talked with the actors in Somalia on the phone during the negotiation scenes), and his documentary-like approach to the story works well with the realistic performances from his cast as giving considerable verisimilitude to the story. We get to know more about its main characters as they try their best under their hard circumstance, and the movie also observes the other things around the negotiation process including Peter’s personal life or a surprising moment of brief rapport between captors and hostages.

And the negotiation goes on and on with no particularly breakthrough for both sides. Yes, both sides want to reach to the agreement, but, like any other difficult deals, it always takes days or weeks or months to find the point where both sides can be satisfied, and this is pretty grueling for everyone – especially the helpless hostages who slowly gets numb and broken under their extending harsh condition. It was repeatedly said in John le Carré’s novel “The Russia House” that spying is waiting; I think the same thing can be said about hostage negotiation. 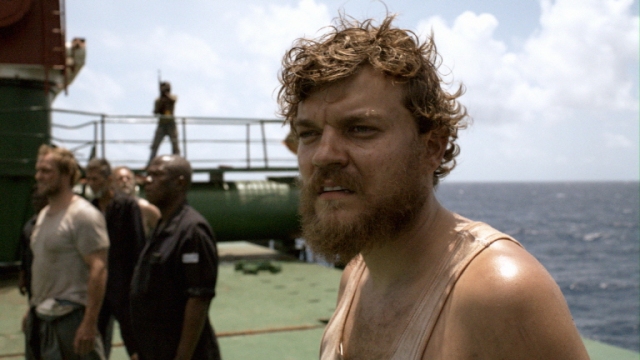