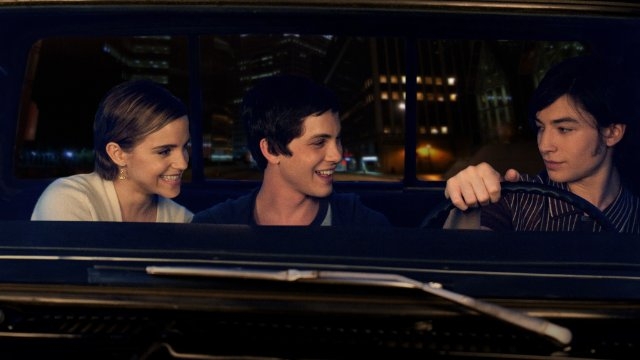 “The Perks of Being a Wallflower” is an enjoyable coming-of-age drama to be appreciated. While it entertains us with various colorful characters surrounding its shy, awkward hero, the movie gives us a heartfelt story about how he comes to get out of a shell named loneliness through his fortunate relationship with nice friends who kindly reach to him. They show him there is nothing wrong with being himself and gladly invite him into their world, and that is a good start for this unhappy boy.

When he starts his first day at high school, Charile(Logan Lerman) has a good reason to be nervous. Besides being a freshman, he is one of those plain kids no one particularly cares about unless they are targeted, and he is well aware of that he will have to struggle through this daily predicament for several years till the graduation day.

At least, he manages to get connected with his English literature teacher(Paul Rudd) who understands his aspiration to be a writer, and the life outside the school is not bad for him. His father and mother, played by Dylan McDermott and Kate Walsh, are good parents who are really concerned about his school life because of his recent depression, and his elder brother and sister are also supportive to him. Charlie sometimes writes to a friend, but I am not so sure about whether his friend really existed or not because the tone of his letters is more like that of a diary(he later said that his friend committed suicide several years ago, but who knows?).

On one day, his lonely school life begins getting brighter when a senior student named Patrick(Ezra Miller) and his half-sister Sam(Emma Watson) come into his life. After meeting him at the high school football game, they take Charlie to the evening party, and that is just the start of many fun things Charlie will experience during his unexpectedly eventful first year. For instance, he accidentally eats marijuana brownies at the party, so he becomes quite dopey for a while to the amusement of everyone at the party – and that will not be his only experience with drugs. 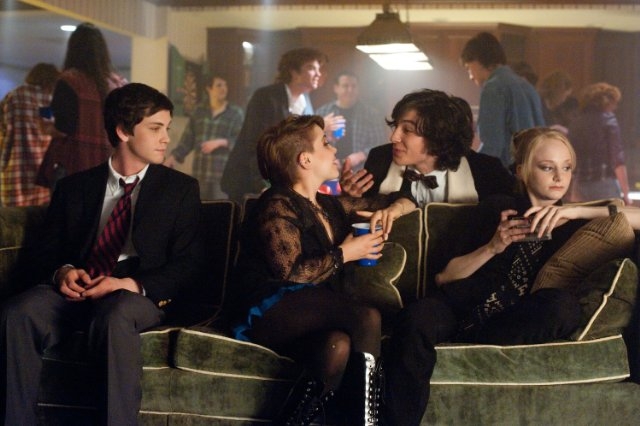 They become closer to Charlie as he has more fun with them. He has a terrific time with them while going through a tunnel by Patrick’s pickup truck. They also go to the theater show performing the highlights from “The Rocky Horror Picture Show”(1975), and, later in the story, Charlie gets a sudden chance to act as an emergent understudy in front of the cheering audiences. When Sam is worried about her SAT test, Charlie volunteers to help improving her SAT score, and she is grateful to him for his help(and she gets a good score).

Meanwhile, Charlie’s personal feeling toward Sam grows, but, like any introverted teenager kids, he is reluctant and indecisive about showing his feelings to her. The age difference is not a problem, but she is being involved with a guy named Craig(Reece Thompson), and the circumstance becomes more complicated when Charlie lets himself getting involved with Mary Elizabeth(Mae Whitman), one of Sam’s close friend.

The movie is based on the novel by Stephen Chbosky, who also adapted his novel and directed the movie for himself. I have not read the novel yet, but, thanks to a good adaptation job by Chobosky, I could discern why his novel has been popular among young readers. The loneliness, confusion, and angst of adolescent years are depicted with sensitivity and understanding in the movie, and the experiences shown through Charlie’s perspective reminded me of some memories from my high school years although my high school experience was a lot different from his.

The movie leisurely rolls its story with humor and warmth, and its three young performers are well-cast in their respective roles. Logan Lerman, who appeared in “Percy Jackson & the Olympians: The Lightning Thief”(2010) and will soon appear in its sequel, is less showy compared to his co-performers, but he is credible as an emotionally troubled teenager. Frequently haunted by some dark memories associated with his dead aunt(Melanie Lynskey), Charlie is a moody kid not good at communicating with others, but Lerman brings likability to his character while not lightening his problematic sides he must deal with for moving forward in his life.

While supporting Lerman, Emma Watson and Ezra Miller surprise us as his good friends who have their own vulnerabilities. Although she does not perfectly deliver American accent at times, Watson gives a performance far different from Hermione in the Harry Potter series in this film, and she has a poignant moment when she indirectly reveals her wish to Charlie during their private conversation. Ezra Miller previously impressed me a lot as Tilda Swinton’s malicious teenager son in “We Need to Talk about Kevin”(2011), and what he does here is 180 degrees different from his despicably vicious performance in that film. Patrick looks like your average flamboyant gay teenager, but he is a lot more than that, and his unofficial relationship with a certain character is one of the interesting things in the story.

“The Perks of Being a Wallflower” is a warm and smart teenager drama which deftly pulls out hope and optimism from its depressed hero in the end. Through the friendship with his friends, Charlie learns a lot about many things as well as himself, and he tentatively comes out of his shell to move on. While his future is not entirely certain, but, like his dear friends, I can assure him of one thing at least – it certainly gets better after high school.