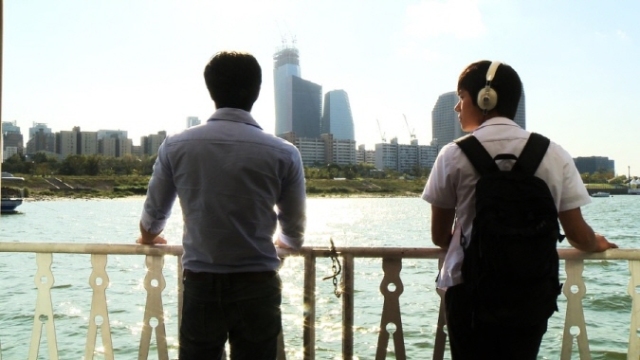 I remember one funny joke you have probably heard about. When a boy goes to a priest for confession, he confesses to a priest that he went to a strip club in the town at last night. With amused understanding, a priest says, “So you saw something you should not have seen, my boy.” A boy instantly replies, “Oh, yes, Father, I saw my dad at the club.”

The reason why I thought about that old joke at the screening of Lee Song-hee-ill’s short film “Suddenly, Last Summer” is that its heroes were in a similar situation not shown in the movie. Poor Kyeong-hoon(Kim Yeong-jae), I guess all this nice high school teacher wanted was having a little free fun at a local gay bar as a closeted homosexual, but, unfortunately at that night, he was noticed by one of his students, and that student even took photos of him at that bar with his cellular phone.

His name is Sang-woo(Han Joo-Wan), and we come to see that he has had a crush on his dear teacher. Unlike his teacher, who is quite nervous about the situation because he can be fired for being gay, Sang-woo is quite open about his sexuality. He even wants to have a serious relationship with Kyeon-hoon, and he is very determined to do anything for that – including blackmailing his teacher with those photos.

So Kyeong-hoon reluctantly follows his pupil’s demand. They go around Seoul together while Kyeong-hoon visits several parents of his students. They go abroad a sightseeing ship on the Han River. It could go on like that while nothing happens, but Kyeong-hoon finds himself gradually attracted to Sang-woo’s passive-aggressive seduction even though he should not have a physical relationship with a minor at any case. 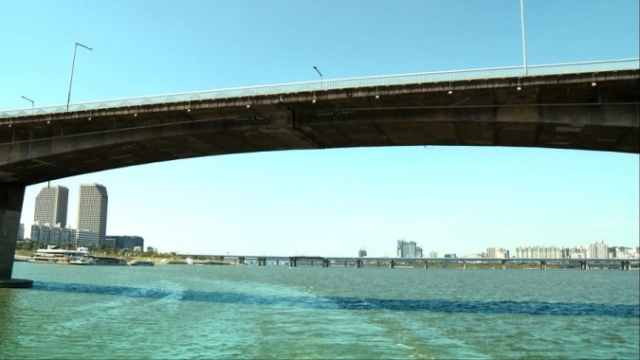 Although there is always sexual tension churning under its surface, the movie has a fun with its compelling drama of attraction and repulsion as it languidly looks around the sights of Seoul seen from a ship on the river. These sights remind me again that Seoul is really filled with many plain concrete apartment buildings here and there on the riverside, but they do not look awful at least. Along with many other buildings and bridges, they look actually nice on sunny summer afternoon in the movie, and I went along with its slow pace while appreciating the performances of its two lead actors.

Kim Yeong-jae conveys us well the conflicting emotions simmering inside him, and we feel sorry for his impossible situation; he can say no to Sang-woo, but Sang-woo will keep coming to him, and he does not know how much he can resist a growing temptation inside him. His co-actor Han Joo-wan is subtly seductive as a young homme fatale even though he looks a little too old at times as an adolescent character. We always should protect minors, but sometimes they can be more sexually active than we think, and that’s why some adults find themselves in big trouble thanks to the teenagers like Sang-woo(if he is really innocent as he claims, I am sure Kevin Clash will tell you a lot about that).

At the screening I attended, “Suddenly, Last Summer” was followed by “Going South”, another short summer afternoon story between two heroes with their own problem. Gi-tae(Kim Jae-heung) is so desperate about not losing Joon-yeong(Jeon Sin-hwan), with whom Gi-tae had a very intimate relationship at the army. Now Joon-yeong finished his obligatory service and got out of the army, and Gi-tae is almost at the end of his service, but Joon-yeong, still conflicted about his sexuality, does not want Gi-tae to be near him.

The movie begins with the awkward silent moment between two as Joon-yeong takes Gi-tae to the army base by his car on the last day of Gi-tae’s vacation. As the last desperate attempt, Gi-tae puts a sleeping pill in the coffee he gives to Joon-yeong. Although he must go back to his army base in less than an hour, Gi-tae drives the car to some remote place for having a private time between them. Joon-yeong is naturally angry about what Gi-tae has done when he wakes up, but, even while he harshly rejects Gi-tae, his repulsion is not that far from his desire.

This short melodramatic tale is relatively less enjoyable than “Suddenly, Last Summer”, but it has good things to be enjoyed. In contrast to the concrete urban atmosphere of the latter, “Going South” is filled with the fresh green rural atmosphere in its background, and its tranquility contrasts with a hostile psychological tug-of-war between two characters. We are again served with a nice duo performance in this case, and Kim Jae-heung plays well with his co-actor despite his lack of experience(this is his first movie). 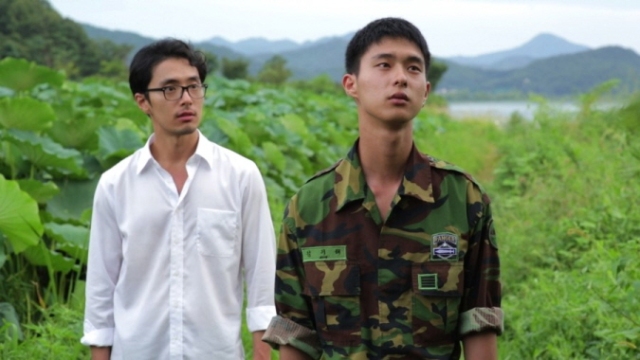 At the beginning, the director/writer Lee Song-hee-ill initially planned to make an omnibus film consisting of three short films. The third one was “White Night”, and it was eventually separated from two other short films as it got extended enough to become a solo feature film during its production. I did not have a chance to see “White Night”, but I heard that it is also a good movie.

As an openly gay director, Lee Song-hee-ill has made several interesting films about homosexuality, and they can show you what is like to live as a gay in South Korean society, which are still not so kind to homosexuality in spite of many social progresses(According to the director, one actor left the production because his mother threatened to kill herself with a cross in one hand and a bottle of herbicide in the other hand as soon as she heard about his participation). “Suddenly, Last Summer” and “Going South” indirectly show me that aspect through their good stories, and I had a nice time with them – and they reminded me that South Korean society has still a lot to go for becoming a model advanced country.