“A Simple Life” feels plainly but deeply touching as a heartfelt story about the life of two good people who have known and loved each other for a long time. They are not family in the strict sense, but they have been more or less than family to each other, and their life has been quietly moving in warmth and intimacy as the inexorable fact of life is approaching to them.

They are Ah Tao(Deannie Yip) and Roger(Andy Lau). When she was very young, Ah Tao was sent from her home in China to a wealthy family in Hong Kong, and she has devoted her entire life to serving this family as a housemaid. This sounds very depressing, but, when we see her for the first time, she is a nice old woman happily doing her shopping at the market in her neighbourhood. When she comes to her favorite vegetable story, the owner and employees are gladly ready for her. They snicker behind her back, but that is because they are always amused by her consistency, and they respect her as their good old customer.

Ah Tao has served the four generations of her master family, and most of them have gone or left Hong Kong. Now only family member in the family apartment(it looks a little small, but think about how expensive the real estates in Hong Kong are) is Roger, who works as a producer in some film company. Their daily life consists of simple routines; he wakes up, and he eats the breakfast prepared by her, and then he goes out for work. After her work is finished, she waits for him to return like a mother waiting for her son, and their day is over when he returns from his work.

But an inevitable change comes into their comfortable life. Ah Tao has already had some medical problem, and she collapses on one day, and, after being taken to the hospital, she finally decides that it is time for her retirement. Although she does not want it, Roger thoughtfully takes care of her retirement process. He finds a fairly decent place for the aged, and he willingly pays the bills like a good son. In fact, he introduces himself to the other old people at the facility as her godson during one scene.

So their life is changed, but the life keeps going on for them as usual. Roger keeps diligently working at his company or going abroad for business matters. While finding some difficulty with adjustment, Ah Tao gets tentatively accustomed to her new environment while befriending her fellow aging people and the staff members at the facility. Unless he is very busy, Roger regularly visits her, and they always enjoy each other’s company.

There is no sudden revelation or melodramatic turn in this gentle drama, but the director Ann Hui, an acclaimed film director who has been admired and respected in her impressive career, slowly pulls us to her story while sensitively capturing the warm and humorous human interactions between her characters within the tranquil rhythm of daily life reminiscent of Yasujirō Ozu’s works. The sadness in their life is deepened as the time goes by, but the humor always hangs around the screen. Ah Tao is a little intimidated by her new place, which filled with many impersonal cubicles for its residents, on her first day at the facility, and she observes many sad miseries among others in the facility, but she loses none of her warm, understanding attitude and she becomes a good friend to many of her fellow residents. One of them is particularly funny, because, while always looking for joie de vivre, he keeps asking around for money to spend on something. 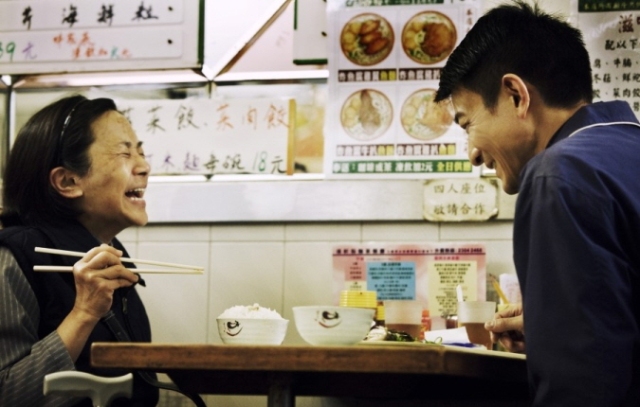 And we come to see how deeply Ah Tao and Andy care about each other more than we thought while also observing how the other family members react to her health problem. The other family members all fondly remember her, and they are sincerely appreciate of her long-time service(for instance, Andy’s mother flies from US just for visiting Ah Tao and showing her gratitude along with gifts), and they kindly accept her as a family member at one big family event.

But they are not as close to her as Andy. The mutual love and concern is always palpable between them even when they jovially tease each other, and one of the most touching moment in the movie comes when they look around the things from their past which have been kept by her in a small room at their apartment. Although there is no serious problem in the relationship between Andy and his mother, Ah Tao looks more like his mother as she recollects their past with him during that scene.

The movie won several awards at the Venice Film Festival in the last year, and one of them was Best Actress award for Deannie Yip. While remaining gentle and warm throughout the movie, she remarkably expresses so many things inside her character through her aged face weathered by the passage of time, and she really deserves the award as the graceful emotional center of the film. Andy Lau, who looks surprisingly quite plain and ordinary compared to his performances in other more famous films like “Internal Affairs”(2002) and its sequels, matches his co-actress well with his understated performance, and we are always warmed whenever they are together on the screen. The other performers are well cast for their respective roles, and, if you are familiar with many Chinese movies and Hong Kong films, you will be very amused by the special appearances made by well-known filmmakers and actors in the movie.

“A Simple Life” is a film somberly shining with the better sides of our human nature through its universal family drama as it recognizes the limitedness of life we all have to face in the end. There are many emotional moments in the movie which has been growing on me since the first viewing, and I was particularly touched by an unexpected turn in a certain scene, which took me back to one surprisingly powerful moment in Yôjirô Takita’s “Depatures”(2008), an equally great film which also humanely deals with life and death through humor and sadness. I won’t go into details, but let’s say it is always moving to see a human being responding to the kindness from the other as much as he can out of his goodness, and you will agree with me on that after watching this beautiful human drama.

This entry was posted in Movies and tagged Drama, Familly, Housemaid, Retirement. Bookmark the permalink.