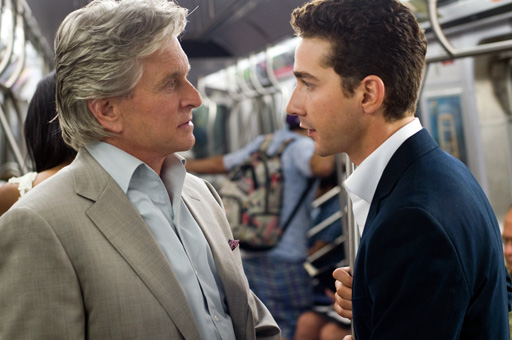 Despite considerable expectation before its release, Oliver Stone’s “Wall Street: Money Never Sleeps” is a little disappointing. It criticizes the current situation more or less than it chronicles the recent financial crisis at Wall Street. The movie begins to lose its edges and sink into unconvincing melodrama as the plot progresses. Maybe Stone thought his movie did not have to deliver the message to his audiences in this time. Several well-made documentaries including “The Inside Job” unforgivingly have already pointed out the problems still remaining in Wall Street, and, above all, most of us know well about how bad the things are now and who are responsible for the unprecedented financial catastrophe in US economy.

In “Wall Street”(1987), Stone tried to warn us about the danger from the motto “Greed is good”. The movie was well-received from the critics and audiences, but the end result was not what Stone might hope for. Thanks to its energetic depiction of the financial business world and one of the most memorable villain performances by Michael Douglas as a ruthless but charismatic corporate raider Gordon Gekko, “Wall Street” was responsible for young people drawn to Wall Street probably as much as “Red Shoes” for young girls drawn to ballet. And Wall Street has followed that motto too much as Gekko says in the movie. “Someone reminded me that I once said greed is good. Now it seems it’s legal now.”

In previous movie, it was implied that Gekko would be in a big legal trouble at the end of story, and it is true indeed. “Wall Street: Money Never Sleeps” opens with Gekko getting out of the prison after serving 8 years in 2001. He seems to lose nearly everything at that time, but, after another 7 years later, he somehow reinvents himself as the messenger with a dire news for the American people. He writes the book(“Is Greed Good?”), appears on TV, and gives the lectures for alerting the imminent financial disaster to people.

His daughter Winnie(Carey Mulligan) is his only family now, but their relationship has been estranged for years. Due to the painful past caused by her father, she does not want to involve with him or anything associated with him while working for a liberal online political magazine. Interesting thing is, her boyfriend Jacob Moore(Shia LaBeouf) works as one of the traders in Keller Zable Investment, one of big investment banks in Wall Street – but they seem to love each other enough for their possible marriage in the future.

Even after going through the massive dreck named “Transformers 2”, LaBeouf is still good at playing a good-willed, enthusiastic, likeable young man eager to learn more and achieve far more. As a protégé of his boss, Louis Zabel(Frank Langella with touching dignity), he is one of the prominent traders in the company. Currently, he is trying to raise the moneys for financing the research on the alternative green energy source. He believes he can make the differences in the world – with lots of money from pioneering in the future industry, of course.

Everything seems to be fine for hopeful Jacob, but some negative rumor drives his company near bankruptcy. That makes Zable kill himself out of humiliation. While meeting with Gekko several times, Jacob learns about who is responsible for this and he tries to revenge on Bretton James(Josh Brolin). Gekko can help him, and he wants something in exchange for his help – it may be more than what he seems to want as Winnie warns Jacob.

Like its predecessor, the strength of “Wall Street: Money Never Sleeps” lies in drawing us into that electrifying world where the money really never sleeps. Its succinct presentation of how the things works out in several exciting sequences instantly reminded me of that busy, exhilarating screen-split sequence in the 1987 movie. Care-free atmosphere before the financial crisis is effectively conveyed by the moment like a grand, luxurious charity party sequence. The shock of following disaster – something far more abstract but also far more realistic than “2012” – is also effectively conjured up within a minute. 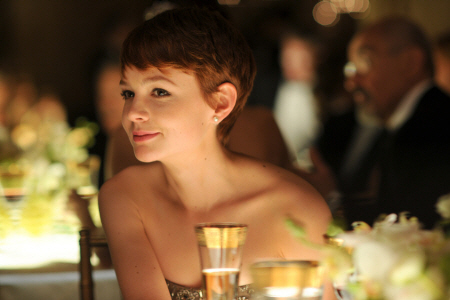 Ironically, that is the point around which the movie runs out of its steam and the problems inherent in the screenplay become noticeable to us. The movie feels sluggish during the third act, and the predictable finale that could have packed more punches in itself. Mulligan is charming and her scene with Douglas is convincing, but the script resolves their problem in a way too convenient and arbitrary. And Susan Sarandon, as Jacob’s mother, is stuck in the shallow character whose main function is to notify us how things are bad outside Wall Street. Her situation took me back to when I saw those desperate real estate advertisements around Chicago in this April.

It goes without saying that Michael Douglas is the best thing in the movie. I was disappointed to see that his reprise of Oscar-winning performance mostly takes a backseat to LaBeouf’s main storyline, but Douglas is still enjoyable to watch as an aged, wiser version of his definite role. His performance is not far from his another good performance of this year in a better movie “A Solitary Man”, where he plays a disgraced business man who has to solve his personal problems including his family(Coincidentally, Sarandon co-starred with him in that movie as an real estate broker ex-wife).

I have to admit that I enjoyed watching “Wall Street: Money Never Sleep”, but I also felt a little regret over bringing my friend in the screening room with me after talking about it a lot to him(Later, I promised to show him “The Social Network” or “The American” in next month). It is entertaining, and it’s good to see Gekko back in action. Despite all that, it is as satisfying as “Wall Street” on the whole; it left me the impression of prolonged epilogue. Maybe was I too greedy? – But I believe greed is always good in case of watching movies.

This entry was posted in Movies and tagged Drama, Family, Finance, Wall Street. Bookmark the permalink.