My first movie review in English 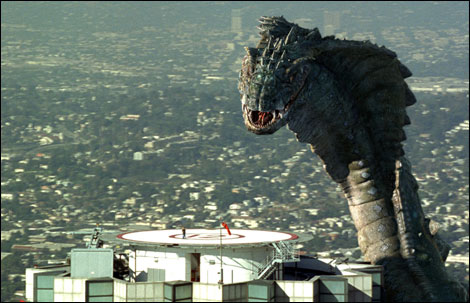 This is my first movie review written on 08/12/07.  I found several errors, but I decided to keep them intact. By the way, the movie was one of the worst Korean movies of the last decade. I initally gave the movie one and half stars out of some pity, but I want to give it BOMB now. The movie was far worse than “The Last Airbender”.

Here is some good news for the audience who will see ‘D-war’. It’s not that terrible. (If you really want to see catastrophe, watch ‘Habando’, which I gave zero stars without hesitation) It was such honor (or dishonor, whatever you like) to see overblown, disjointed direct-to-video movie projected on huge screen with people around me. However, it was quite depressing 90 minutes. I hate flat, lifeless character-interacting scenes, I was not amused by its cheap humor that evoked very small laughter from audience, and I was at a loss during spectacularly unconvincing and unrealistic finale. In case of CG, the monsters are more or less convincing than hideous monster from ‘Deep Rising’. Two attack scenes, good on their own, are just average showcasing of CG without purpose in the movie. The final showdown does not take place in L.A., and I’d rather see that leftover sets and monsters and soldiers from ‘The Lord of the Rings’ appearing in the middle of smashed L.A.

Last year, ‘Lady in the Water’ introduced outrageous Korean folk tale with not-so-Korean names to U.S. audience. This year, ‘D-war’ will provide them another one, which is told by literally ubiquitous Robert Forster. I was glad to see Scott Wilson in ‘The Host’, but Robert Forster in ‘D-war’? U.S. critics will probably have the field day with comparing Mr. Forster and Mr. Wilson in their respective movies.  It’s disheartening to see that Academy award nomination didn’t help Mr. Forster’s career, and the only consolation is, like Peter O’Toole in ‘Phantoms’, that Mr. Forster speaks some preposterous lines without laughing. That’s the sign of veteran actor who started the career with ‘Reflections in a Golden eye’ 40 years ago. Anyway, he’s still working, so don’t worry folks.

Speaking of director Hyung-rae Shim, I won’t say anything offending to him. He just tried hard to make the film he wanted, and now he gets his wishes. However, he does the most annoying thing I have ever seen on the screen. He seems to think quite seriously of himself and the movie, and, with lame inclusion of ‘Arirang’ at the end of movie, he shows production pictures with some serious statement. I hope he will never show translated version of it or whatsoever to U.S. critics. They will have gut-busting laugh. It is just like the student who submits lousy report after long, long time with some notes saying ‘I tried very, very hard against all odds and this will be my magnum opus. Help me please’.  I’m a graduate student who has been as ruthless as Anton Ego to undergraduates about their grade, and big minus point will be guaranteed if I have to grade the one like that.

One of the standards of late Gene Siskel is, ‘Is this movie better than a documentary of the same actors having lunch?’. Mr. Shim, the answer for your movie is ‘NO’, and maybe you will have to prepare pretty interesting documentary ‘The Making of D-War’ for DVD supplement. Or, based on your ‘reported’ stubbornness and determination, maybe I should ask Roger Ebert about how to make Werner Herzog get interested in you. Maybe you can show Mr. Herzog that you also can move the big steamboat ship to the top of mountain. Maybe Mr. Herzog will get interested and make the documentary about your next big gamble. Now, that’s the movie I’d like to see.   (* 1/2)

This entry was posted in Movies and tagged Dragon, Fantasy. Bookmark the permalink.

3 Responses to My first movie review in English