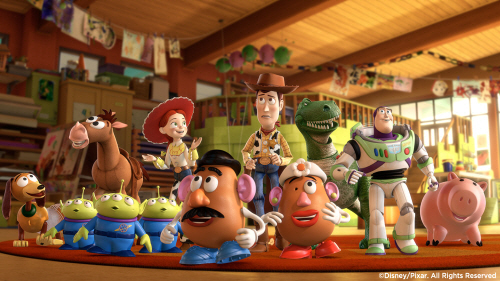 “Toy Story 3” has nostalgic quality to me. Come to think of it, I virtually grew up with these two wonderful animations. When I was about to become a teenager, “Toy Story”(1995) was released and I was fascinated by the new kind of animation as a young moviegoer(Ah, I love those days when I could watch the movie as many times as I wanted). When I was about to go to the university, “Toy Story 2” (1999) arrived in a local theater in my town and I was delighted to meet these loveable characters I came to like.

As a boy, I enjoyed Toy Story series as a fun animation, and I still like it as not only witty animations but also simple but good dramas about toys who are afraid of the instability of their status. While the first movie talked about acceptance and friendship from the story of the rivalry between Cowboy Woody and Astronaut Buz, the story of the second movie went further and the toys became more serious about their future. They were well aware of that they would be abandoned in someday, but, in the end, they chose a limited happiness and love instead of the ennui of immortality.

In “Toy Story 3”, the day they have surreptitiously been scared of has finally come upon them. As shown in the opening sequence, their sweet time has quickly passed away. Now the toys have been stacked together in the chest instead of being scattered around the room. We notice the absence of some toys from previous movies. Their master, Andy, is not a child anymore. Now, because he is about to go to the university, his toys will spend a long or infinite time without him – if they manage to escape the dreadful fate of being discarded to a garbage truck.

Through series of mistakes and misunderstandings, Woody(Tom Hanks) and Buz(Tim Allen) and other toys come to Sunnyside daycare center. They are greeted by the resident toys led by a teddy bear named Lotso, who likes to hug other toys in a fishy undertone in contrast his fluffy appearance and the mellifluous voice of Ned Beatty. While Woody still wants to be with Andy, other toys decide to stay in this place and they begin to like this place where they can be with children every day. However, they soon realize the daycare center is not the haven it seemed to them at first. So, their new adventure beyond the infinity begins again in rather fearful fashion. 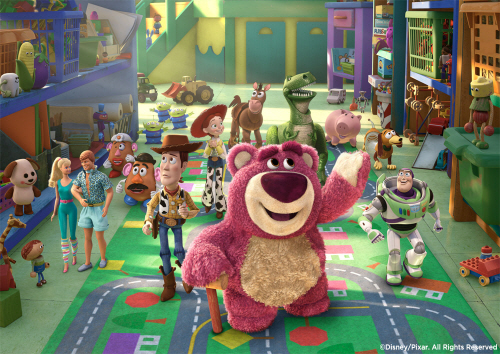 Frankly, and basically, the movie is a horror movie. From the Day 1 in the daycare center, the toys in the movie goes through several perilous situations and it is possible that we will may bid early farewells to some of them considering the intensity of situations they are forced to endure. What happens to them in the first close encounter with these ruthless toddlers is supposed to be comedy, and it works well, but sometimes it’s horrific. It’s funny and energetic, but it will probably induce wince not only from these poor toys. And when the denizens of Sunnyside reveal their teeth, the situation for them becomes as sinister as “Coraline”.

The movie is the darkest story in the series. The situation is dour for Andy’s toys. Even if they succeed in getting out of their imminent dangers, the future is still not bright for them. Unlike previous movies, Andy’s room is not waiting for them at the end of their journey this time, and most of them will probably be just remained as the mementoes being forgotten day by day in the attic. In case of Woody, his situation is a little better, that does not make much difference. Although they willingly made a choice in previous movie because they wanted to be loved even just for one day, they desperately want to avoid its consequence. Eventually, through this dark adventure mixed with the confrontation with their mortality, they come to learn something not different from the one we learn in our life.

Maybe my description so far sounds daunting to you, but the movie is fun as the model Pixar animation. The screenplay by Michael Arndt(“Little Miss Sunshine”) ,based on the story by John Lasseter, Andrew Stanton, and Lee Unkrich. has some touches of recycling from the formulas in previous movies, but the story has been always in the first place in every Pixar animation. The drama is solid as usual. The villain of the story is presented with an understandable past. There are many witty moments sprinkled throughout the movie, especially when the story follows the footsteps of the prison movies like “The Great Escape”. I’m not sure whether a Mexican gag on Buz is effective or not, but I am happy to report that the audience with me had a big laugh with that gag. On sidenote, I’m curious about how it is presented in Korean-dubbing version, but I do not like to spend money again on watching 3D. 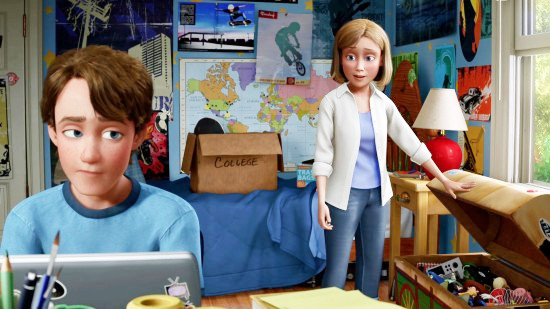 In case of 3D, well, like any other moviegoers, I’ve been tired of it for a long time. The funny thing about 3D is that it’s noticeable when it’s bad, and it’s unnoticeable when it’s good. 3D effect in “Toy Story 3” is nice, but it does not seem particularly necessary at all and I was again confirmed again of its problem with brightness and other things when I took off my glasses for a while(I recommend you to take off the glasses during home video sequence). At least, “Day and Night”, a short animation before feature presentation effectively uses the 3D effect. It shows that good 3D goes inside the screen, not outside.

I laughed frequently during watching the movie, and I was joyful to see the guest appearance of Totoro), but I have to confess that I have some reservation about the movie. I like it, but I don’t love it as much as many enthusiastic reviewers. The story tells about the fate we knew it would come to the characters, and we get exactly as much as we have expected as a result. Despite its solidity, the story sometimes is shaken during its frantic actions. Overall, it leaves me the impression of an extended epilogue.

However, as we saw from “A Bug’s Life” or “Cars”, the average Pixar animation is still better than at least 80% of the animations coming out every year. With great animations like “Ratatouille”, “Wall-E”, and “Up”, the standard for Pixar has gone higher and higher, and “Toy Story 3” just looks like one step down compared with them. It’s not their best film, but people at Pixar know well about how to pull our heartstrings and the finale has undeniable poignancy especially in a brief wordless, bittersweet moment. Goodbye, dear toys, I don’t know whether we’ll meet again, but I had a good time with you. 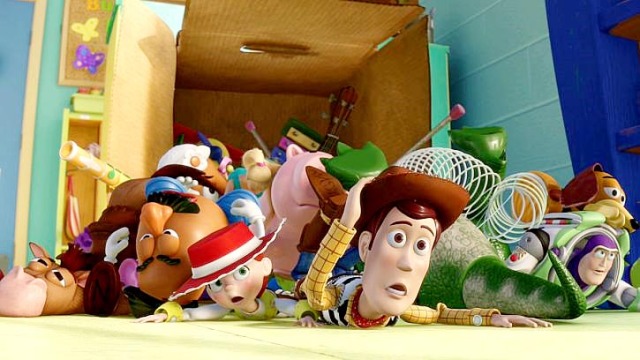 This entry was posted in Movies and tagged Animation, Daycare, Pixar, Toy. Bookmark the permalink.