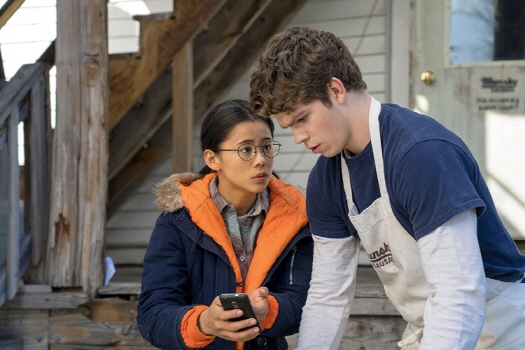 To be frank with you, I did not expect much when I watched the trailer of Netflix film “The Half of It”, which received the Founders Award at the Tribeca Film Festival before released on Netflix in last week. While its story premise is pretty familiar as clearly influenced by Edmond Rostand’s 1897 play “Cyrano de Bergerac”, the movie not only sidesteps its genre conventions but also feels quite refreshing in terms of story and characters, and the overall result is another recent notable breakthrough in the presentation of Asian characters in American films after “To All the Boys I’ve Loved Before” (2018).

The story is mainly told through the viewpoint of Ellie Chu (Leah Lewis), a Chinese American high schooler who has lived in a small remote rural town named Squahamish. As being the only Asian kid in the town, Ellie has been a lonely outsider in her school, but this shy but intelligent and independent girl does not mind that at all, and we see how she takes care of many daily matters for herself instead of his father, who is the station master of the train station of the town but has been quite inert and depressed since he lost his dear wife several years ago.

For earning some extra money, Ellie has often done homeworks for many other kids in her school, and then there comes an unusual request from Paul Munsky (Daniel Diemer), a school jock who is a member of their high school football team. He has had a crush on a popular girl named Aster Flores (Alexxis Lemire), and he has yearned to get her affection even though she is officially in a relationship with some other school jock. While Ellie is not so eager to do that because she finds herself attracted to Aster after their accident encounter at the school, she eventually agrees to help Paul mainly because she needs the money for paying the electricity bill right now, and she soon works upon love letters to be sent to Aster as coaching Paul a bit on how to talk with Aster during their date.

One of the main surprises in the movie is that Aster turns out to be more sophisticated and sensitive than expected. Through her sincere replies to the letters written by Ellie, she reveals some hidden sides she has never shown to her peers as well as her current boyfriend. She really wants to make a meaningful human connection with Paul, so Ellie has to make Paul go through more preparations. In addition to having him reading several good books including the ones written by a certain famous Nobel Prize winner, she also teaches him on how to talk well in front of Aster, and we accordingly get a humorous scene where she trains him as playing ping-pong with him.

While helping Paul more and more, Ellie naturally becomes conflicted as feeling more attracted to Aster than before, but she also comes to care a lot about Paul, who is certainly not that smart but sincerely appreciates what Ellie has done for him. At one point, he defends her when she happens to be insulted by some rude kids as usual, and he also saves her from a very humiliating situation caused by a mean prank during her music performance in front of the student body.

Now you may have a pretty good idea about where the story and characters are heading, but the screenplay by director/co-producer/writer Alice Wu, who has been mainly known for her debut feature film “Saving Face” (2005), keeps surprising us while leisurely handling its story and characters with care and attention. As its three main characters try to deal with their respective matters of heart, the movie often catches us off guard with unexpected moments of tenderness and poignancy, and I especially like one certain scene where Ellie happens to spend some private time with Aster, who, though she still has no idea on what is going on among her, Ellie, and Paul, is willing to get closer to Ellie for getting to know Paul more.

The story eventually arrives at a narrative point where its three main characters have to make each own choice (Is this a spoiler?), but the movie thankfully does not push them into cheap resolution while reminding us of how much they have been changed in the end – and how much they may go further after that. The movie also pays some attention to Ellie’s father, and there is an expected but undeniably touching moment later in the story when he convinces his daughter to do what is really the best for her life and herself.

The three main performers of the movie are engaging and convincing in their respective characters’ narrative arches. Constantly appealing with her natural charm which makes us instantly root for her character, Leah Lewis deftly conveys her character’s complex thoughts and feelings to us, and she is complemented well by Daniel Diemer and Alexxis Lemire, both of whom did a solid job of bringing considerable personality and humanity to their seemingly simple characters. While Collin Chou provides some gravitas as Ellie’s melancholic father, Becky Ann Baker has a little acerbic fun as a jaded but caring teacher who has recognized Ellie’s bright potentials, and she certainly made me quite amused via her excellent comic timing around the finale.

On the whole, “The Half of It” is a lovely coming-of-age drama to be appreciated, and its numerous good moments have grown on me since I watched it yesterday. It is a shame that Wu was not that active for more than 10 years after “Saving Face”, but she demonstrates here that she is still a talented filmmaker, and I really hope “The Half of It” will lead to more stories to be presented by her.