Animation feature film “The Willoughbys”, which was released on Netflix a few weeks ago, is funny and colorful as cheerfully going all the way with its exaggerated animation style and naughty sense of humor. While you may wince a bit during some of those dark and nasty moments in the film, you will be also delighted by numerous spirited moments to be savored, and you will surely come to root for its young main characters, who happen to go through a series of unfortunate moments as reaching for what they need most.

The young main characters of the films are the four children of Walter and Helga Willoughby (voiced by Martin Short and Jane Krakowski, respectively). As a husband and a wife, Walter and Helga have been inseparable to each other while deeply and adamantly in love with each other, but they have been pretty crummy parents to their children, and their sheer negligence often nearly approaches to abuse and mistreatment. They are annoyed and enraged whenever their children dare to distract them from their romantic time, and their eldest son Tim (voiced by Will Forte) is usually the one to be blamed and then kicked down into the coal bin for that.

Anyway, things are not always bad for Tim and his three siblings. While having been stuck in the upper part of their old-fashioned house located right in the middle of a big modern city, each of them has grown up fairly well despite their harsh parents, and we see how each of them usually spends time in their private place which is filled with books and many other stuffs. While Tim is obsessed with becoming as great as his many glorious ancestors someday, his younger sister Jane (voiced by Alessia Cara) yearns for adventures out there as frequently singing alone, and their little twin brothers, both of whom are voiced by Seán Cullen, are precocious kids with considerable engineering skill and knowledge. 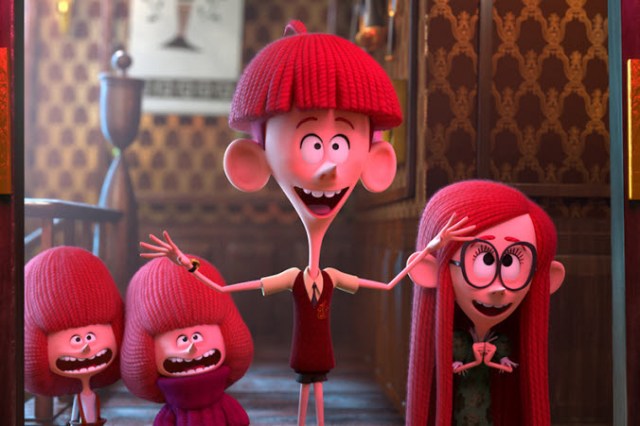 And then, as their pet cat who functions as the narrator of the film has already announced to us, there comes an unexpected change to them during one dark and stormy night. Thanks to that happening, Tim and his three siblings subsequently find themselves outside their house, and that eventually leads to their first encounter with a big candy factory outside the city, which belongs to a dude who looks as ridiculous as Willy Wonka.

After their first adventure outside their house, Tim and Jane come to feel the need to be emancipated from their parents more than ever, and they soon come upon a clever idea for getting rid of their parents and then becoming orphans in the need of good parents. They concoct a tour plan consisting of very dangerous places around the world, and their parents, who are not so bright in contrast to their children, are easily manipulated to accept this outrageous tour plan because, well, they want to be away from their children as much as possible.

Before leaving the house, Helga and Walter hire a nanny at a fairly cheap price, so Tim and his siblings do not expect much from the beginning, but, what do you know, their nanny, voiced by Maya Rudolph, turns out to be a lot more amiable and caring than they expected. As coming to learn more about how Tim and his siblings have been neglected and ignored, the nanny comes to pay more attention and affection to them, and she also helps them befriending that candy factory owner, who turns out to be less hostile than he seemed at first.

Of course, the situation becomes problematic as Tim and his siblings belatedly come to realize the serious consequence of their innocent plan. While they may lose their house forever because of their parents’ reckless and thoughtless decision, there are also a bunch of menacing social service workers, who are quite ready to take them away because, well, they are officially orphans now.

Briskly bouncing from one narrative spot to another, the screenplay by director Kris Pearn and his co-writer Mark Stanleigh, which is based on the book of the same name by Lois Lowry, steadily provides uproarious moments for good laughs, and Pearn and his technical crew members did a good job of imbuing the film with distinctive mood and style. While this is a digital animation film, the texture of its characters and backgrounds often evokes that of stop-motion animation film, and that is particularly exemplified well by the woolly impression of the hairs of the Willoughby family members (It is no wonder that Helga makes her husband’s facial hairs into threads to be knitted by her).

The main cast members of the film are all effective in their respective voice performances. While Will Forte, Alessia Cara, and Seán Cullen put lots of personality and spirit into their respective parts, Maya Rudolph is warm and sincere as required, and Terry Crews is constantly brimming with joviality in his eccentric role. In case of Martin Short and Jane Krakowski, they certainly have a ball with their amusingly obnoxious characters, and Ricky Gervais is sardonic as usual as the narrator of the film.

Overall, “The Willoughbys” is another distinctive animation film from Netflix after its two recent Oscar-nominated animation films “Klaus” (2019) and “I Lost My Body” (2019), and you will appreciate it especially if you enjoyed reading those naughty works of Roald Dahl such as “James and the Giant Peach”, which is incidentally mentioned in the film. It may look modest, but it distinguishes itself well on the whole, so I gladly recommend it to you.

This entry was posted in Movies and tagged Animation Film, Comedy, Family. Bookmark the permalink.