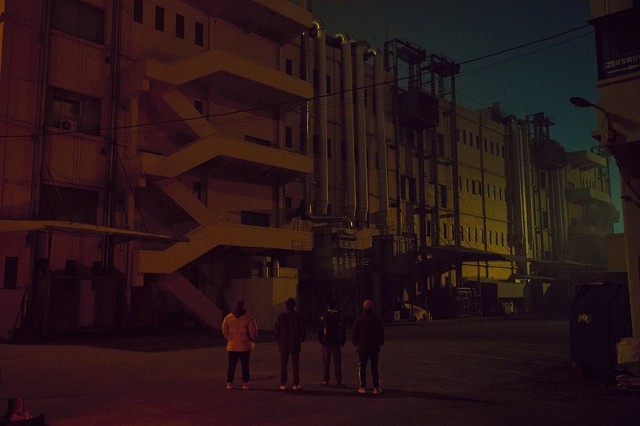 South Korean film “Time to Hunt”, which was originally scheduled to be released in South Korea movie theaters around the end of this February but then, after some last-minute legal dispute, was instead released on Netflix in last week due to the ongoing outbreak of COVID-19, grabbed my attention with a number of striking visual moments to be appreciated but then, sadly, let me down a lot in the end. While I admired the considerable technical efforts put onto the screen, I also constantly felt distant to the story and characters often devoid of spirit and personality, and it is really a shame considering how much I and many other audiences expected from it before its eventual release.

The movie is set in a near-future dystopian version of South Korea society, which has been seriously collapsed due to some huge financial crisis which suddenly happened a few years ago. While the streets and alleys of Seoul look nearly unrecognizable as looking dirty and shabby in its gray gloomy atmosphere, thousands of citizens have been hopeless and homeless after losing their homes and jobs, and the value of the local currency has been decreased so much that only dollar is accepted in many business spots.

And that is a really bad news for Jun-seok (Lee Je-hoon), an ex-con lad who is recently released after serving three years for the robbery committed by him and his two friends Jang-ho (Ahn Jae-hong) and Ki-hoon (Choi Woo-shik). For protecting his friends/accomplices as well as their root, Jun-seok did not say anything to the police, but Jang-ho and Ki-hoon belatedly inform him that their root has become almost valueless thanks to the financial crisis, and that certainly frustrates and exasperates Jun-seok, who has been dreaming of getting out of the country through their root someday.

However, it does not take much time for Jun-seok to concoct another criminal plan for him and his friends. When they happen to spend some time at a secret gambling spot run by some local criminal organization, Jun-seok notices the considerable amount of money being transacted at the gambling spot, and he also comes across a young employee named Sang-soo (Park Jung-min), who turns out to have a rather disagreeable past between him and Jun-seok. After bullying Sang-soo a bit, Jun-seok coerces him to help the plan for robbing the gambling spot, and Jang-ho and Ki-hoon also join Jun-seok despite some reluctance because, well, they feel indebted to Jun-seok and, after all, they have been hoping for escape as much as Jun-seok.

What follows next is a series of obligatory scenes expected from any heist flick. Jun-seok and his cohorts visit a rather generous arms dealer willing to provide them a bunch of firearms and bullets in addition to bulletproof jackets, and they also work on how to rob their target within a few minutes without leaving any incriminating trace, though we do not get much detail on that as the movie briskly hops from one mandatory moment to another without much inspection.

It is not much of a spoiler to tell you that Jun-seok and his cohorts successfully snatch lots of money from their target, and you will also probably not so surprised to see that their situation subsequently becomes quite more dangerous than they have ever imagined. There soon comes a mysterious man into the picture, and this lone figure, who turns out to be quite ruthless and single-minded, is already ready to track them down to the end for resolving his business trouble once for all.

As a result, the mood becomes far more tense and nightmarish than before, and the movie accordingly unfolds a series of stylish sequences as Jun-seok and his cohorts struggle to evade their dangerous chaser, who, for some twisted reason, lets them run away for a while during the first confrontation between him and them. As being more aware of that this guy is virtually unstoppable, Jun-seok and his cohorts are thrown into more panic and desperation, and their chance of survival and escape keeps getting decreased. 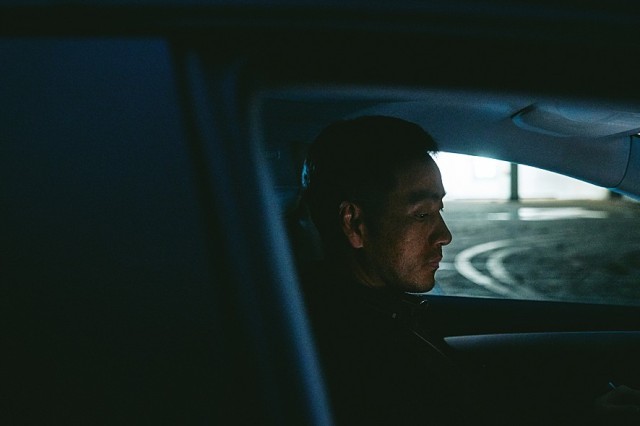 We are supposed to be more emotionally involved in this increasingly intense and desperate circumstance, but the movie does not have enough human depth to hold our attention. While its dystopian background often provides impressive visual moments mainly thanks to cinematographer Lim Won-geun and production designer Kim Bo-mook, the movie does not go beyond the mere details of its fictional world, and it is also deficient in terms of storytelling and characterization. While the story itself is pretty predictable without bringing anything new to its genre territory, the main characters in the movie are mostly flat in addition to being stuffed with clichés, and we consequently come to observe their circumstance from the distance without much care or attention.

At least, the main cast members try as much as they can with their cardboard roles. While Lee Je-hoon and Park Jung-min, who previously collaborated with director/writer Yoon Sung-hyun in “Bleak Night” (2010), acquit themselves well, Choi Woo-shik, who recently appeared in Oscar-winning film “Parasite” (2019), and Ahn Jae-hong, of whom I have grown fond since his comic breakthrough turn in “The King of Jokgu” (2013), are also fairly solid, and Park Hae-soo looks creepy and chilling as required by his psychopathic role.

Overall, “Time to Hunt” is commendable in several technical aspects, but it is quite disappointing compared to Yoon’s unforgettable debut feature film “Bleak Night”, which is one of the best South Korean films of the last decade in my trivial opinion. It is certainly nice to see that he got a chance to direct another feature film after almost 10 years of absence, but the overall result is more or less than a case of sophomore slump, and I can only hope that he will soon move onto better things in the future.

This entry was posted in Movies and tagged Crime, Dystopia, Heist, Thriller. Bookmark the permalink.