French film “By the Grace of God”, which won the Jury Grand Prize at the Berlin International Film Festival early in last year, shook me hard with its sobering and harrowing tale loosely based on a real-life sexual abuse scandal inside the Catholic Church in France. Mainly revolving around several survivors trying hard to bring the Church to account, the movie calmly and gradually presents their old emotional traumas and struggles with considerable empathy and understanding, and, around the end of their long, painful struggle for justice and closure, you will come to feel more of its quiet but palpable anger against the unjust silence of the Church on the sexual abuse committed by those sexual predators inside its system.

The story starts with Alexandre Guérin (Melvil Poupaud), a decent ordinary family man who is also a devout Catholic although he is still struggling with what happened to him many years age. A priest named Bernard Preynat (Bernard Verley), who was in charge of young Guérin and several other young boys in his parish during that time, sexually molested him more than once, and Guérin’s parents did not do anything even when Guérin belatedly confided this horrendous sexual crime to them several years later.

Not long after coming to learn that he was not the only one molested by Father Preynat, Guérin finds that Father Preynat is still active and is also frequently working around boys, and he is naturally concerned a lot about that. Fully supported by his wife and five children, he decides that he must do something for stopping Father Preynat, so he writes a letter to Cardinal Barbarin (François Marthouret), but Cardinal Barbarin only promises changes and rectifications without doing a lot. As Guérin keeps demanding him, Cardinal Barbarin eventually arranges a private meeting between Guérin and Father Preynat, but its aftermath only leaves Guérin with more pain and disillusion as Father Preynat refuses to apologize even while admitting everything to Guérin.

Guérin even sends letters to the Vatican later, but, not so surprisingly, he does not receive any response at all, and he surely feels helpless as watching Father Preynat continuing to hide behind the Church. He begins to look for any survivor willing to talk about Father Preynat’s heinous crimes, but many of them are understandably reluctant, and that eventually prompts Guérin to take a legal action which will not only corner the Church but also let those many survivors know that they are not alone at all.

After that narrative point, the movie shifts its focus to François Debord (François Marthouret), another survivor who has understandably been an atheist. When his parents notify to him that Father Preynat is charged of sexual abuse, he is not particularly interested at first, but then he soon becomes quite determined to do something once he comes to realize that the Church is still allowing Father Preynat to be around young boys. Along with a fellow survivor, François quickly sets up an association for the survivors of sexual abuse inside the Church, and a number of survivors subsequently join their group while hoping for closure and justice as much as them.

However, Cardinal Barbarin and the Church are still not doing anything except giving perfunctory public statements reeking of denial and disregard, and that surely frustrates and exasperates François a lot. While his parents, who tried as much as they could after coming to learn about what occurred between him and Father Preynat, still shows support and compassion as before, his older brother is rather disgruntled for his own personal reason, and their Christmas family dinner consequently becomes quite tense and awkward as they happen to clash with each other.

And then the movie introduces us to Emmanuel Thomassin (Swann Arlaud), a smart but antisocial guy with a psychological seizure problem. When his mother, who knew about what he suffered at the hand of Father Prenyat, shows him an article on Father Prenyat, his body and mind instantly respond to that, and that is just the tip of deep pain and anger inside him. While supported and consoled by his fellow survivors, he cannot help but become quite emotional as confronting Father Prenyat later, and that is one of the most harrowing moments in the film.

Steadily tactful and restrained, the screenplay by writer/director François Ozon slowly accumulates narrative momentum as its three main characters’ emotional struggles one by one, and the movie, while less stylish and flamboyant compared to many of Ozon’s previous films, simply lets us gather its big picture of horror, pain, and injustice step by step. Although there are fictional aspects in terms of story and characters, Cardinal Barbarin and Father Preynat are real-life figures as shown from the epilogue of the film, and those lawyers representing Father Preynat actually tried to prevent the film from getting released in France in last year.

In conclusion, “By the Grace of God” is a somber but undeniably powerful drama, and it surely deserves to be mentioned along with Oscar-winning film “Spotlight” (2015), another notable movie about the systemic cover-up of sexual abuse on children inside the Catholic Church. Although it is sometimes difficult to watch because of the searing emotional intensity behind its phlegmatic façade, the movie is worthwhile to watch for its solid storytelling and performance, and I hope it will lead to more conversations and discussions on its urgent issues. 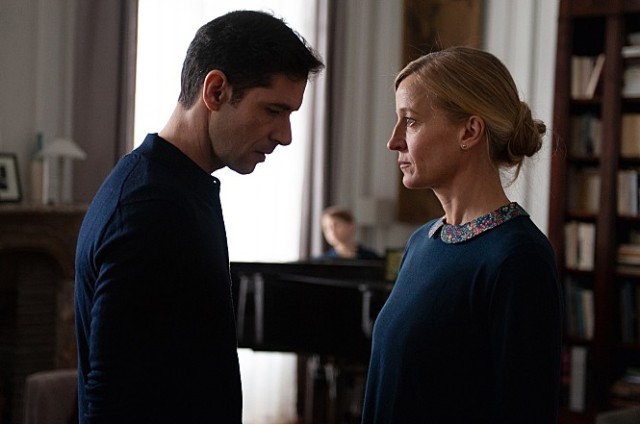