“Chained for Life” is an odd, amusing comedy film which cheerfully dances around its interesting subjects as generating a number of thought-provoking moments to be appreciated. Although I was initially a bit baffled about what exactly it intends to do, I soon found myself amused and fascinated with how it makes some good points on its subjects via a deliberately self-conscious storytelling approach, and I gladly went along with that as savoring its several witty moments.

After quoting the words of legendary movie critic Pauline Kael on why we always love to see beautiful actors and actresses from movies, the movie throws us straight into the opening scene set inside some old hospital building. As the camera smoothly follows a young woman, we gradually come to sense that something is not all right with her and her surrounding environment, and then it is revealed that 1) she is blind and 2) a risky secret medical experiment is being done by a young doctor at this hospital. If he succeeds in his experiment, all those people with disabilities in the hospital including her can be, uh, normalized, and he is very determined to achieve his goal by any means necessary.

And then the movie reveals to us that the woman and the doctor are actually performers doing their job under the direction of a renowned European movie director. Alternatively reminding me of Rainer Werner Fassbinder and Lars von Trier, this eccentric director seems to be oblivious to how ridiculous and pretentious his latest work actually is, and he does not even give any helpful tip to his lead actress for understanding her character more, while still trying to figure out how to present his story more effectively.

Anyway, his lead actress, named Mabel (Jess Weixler), tries her best even when the camera is not rolling. When a journalist comes to the set for an interview with her, she gives seemingly sincere but ultimately banal answers to a series of hard questions from that journalist, and we get one of the most amusing moments in the film when she says that she has no problem with playing a blind character because she can understand blind people’s disadvantageous position even though she is not blind at all.

Meanwhile, the director and his crew and cast members are ready for bringing more authenticity to their filmmaking process. A bunch of real people with disabilities soon arrive in the hospital, and most of these people are going to play minor characters in the background while Rosenthal (Adam Pearson), a guy with neurofibromatosis, is going to be Mabel’s co-star. When she meets Rosenthal for the first time, Mable finds it a bit difficult to look at his disfigured face, but the mood is soon lightened a little as they talk about acting during their private conversation. She demonstrates to him how to look sad or happy, and then he requests her to express empathy, which, to our amusement, turns out be quite a challenge for her.

Rosenthal is willing to act as much as for the director, but the director demands a lot more from him while shooting a seemingly simple shot showing Rosenthal’s appearance from the darkness. Not so satisfied with how Rosenthal makes an entrance, the director relentlessly makes small and big demands to Rosenthal, and that eventually leads to an absurd moment when the director rambles on the importance of big dramatic appearance with a certain children’s film as a classic example. 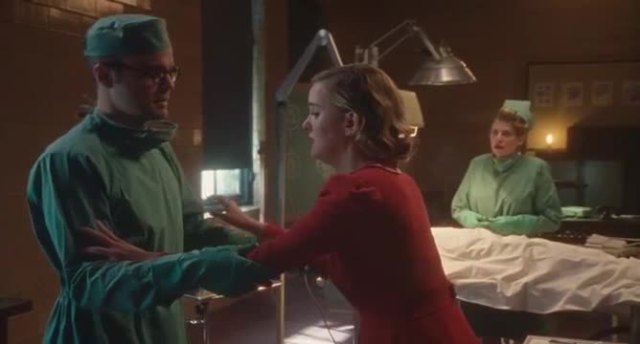 Whenever another shooting day is over, the director and his cast and crew members go back to a nearby hotel where they stay, but Rosenthal and other people with disabilities are instructed to sleep in the hospital building because the hotel happens to be not suitable enough to accommodate them all. As the movie frequently shows their confined status, we become more aware of the line between being normal and abnormal, and that naturally leads to some reflection on the representation of people with disabilities in the film.

Around that point, the screenplay by writer/director Aaron Schimberg begins to explore and comment on its subjects more, and it also has its characters sway back and forth between reality and fiction. There is a humorous scene where Rosenthal and other people with disabilities have a little fun with a video camera left in the hospital, and there is also an impressive sequence where Mable finds herself under a situation not so far from whatever Rosenthal has gone through. What is shown to us after this sequence will surely catch you off guard, but then it comes to us as something quite poignant as we come to discern what has been changed between Mable and Rosenthal. While Jess Weixler, who was memorable as the girl with vaginal teeth in “Teeth” (2007), steadily holds the ground, Adam Pearson, a non-professional actor who previously appeared in “Under the Skin” (2013), is alternatively funny and touching, and they are also supported well by the other main cast members in the film including Stephen Plunkett and Charlie Korsmo.

On the whole, “Chained for Life”, which is Schimberg’s second feature film after “Go Down Dead” (2013), may be a little too weird for some of you, but it is worthwhile to watch for its offbeat sense of humor as well as the witty and thoughtful treatment of its subjects. In short, it is one of more interesting films of this year, and I assure you that it will linger on your mind for a long time once you finish watching it. 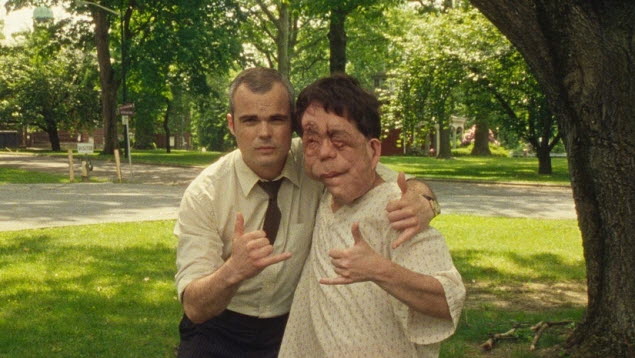 This entry was posted in Movies and tagged Actress, Disability, Filmmaking, Movie. Bookmark the permalink.