When Oscar-winning Disney animation film “Frozen” (2013) came out six years ago, I was not as enthusiastic as many other audiences and reviewers, but I did appreciate a number of good things in that unexpectedly popular animation film. Besides its unforgettable original song “Let It Go”, I was entertained by its several wondrous visual moments as well as its colorful main characters, and I was also amused by how it brought some fresh air to its genre conventions as mixing many different modern elements into its eclectic story, which initially seems to be a typical Disney princess story partially inspired by Hans Christian Andersen’s famous fairy tale “The Snow Queen” but then becomes something quite different and refreshing in the end.

In case of “Frozen 2”, it attempts different things just like its predecessor, and it succeeds to some degree. Although some of you may disappoint to see that it does not reach to the level of its predecessor, it is still fairly enjoyable mainly due to a number of good things to be savored, and I was entertained by these good things even though I noticed its glaring weak aspects from time to time during my viewing.

After their adventure in “Frozen”, things have been mostly good for Elsa (voiced by Idina Menzel) and her younger sister Anna (voiced by Kristen Bell) during next three years, and we see them spending some cozy evening time along with Anna’s boyfriend Kristoff (voiced by Jonathan Groff) and a sentient snowman named Olaf (voiced by Josh Gad), but Elsa still feels awkward about herself and her current position as the queen of their kingdom. Sure, she can fully control her magical power now, and her younger sister is always ready to stand by her for comfort and support, but it seems to her that her destiny belongs to somewhere out there, especially when she suddenly hears a mysterious singing voice on one day. 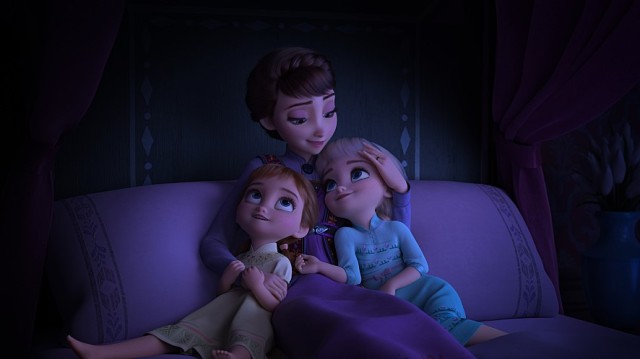 Because of the prologue scene of the film, we already have a pretty good idea on where that singing voice comes from. When Elsa and Anna were kids, their father told them the story about an enchanted forest located at the far north side of the kingdom, and then their mother sang a lullaby which is rather moody in its message. Still remembering what their parents told them many years ago, Elsa goes all the way as following her growing sense of destiny, and that leads to an exuberant musical scene accompanied with “Into the Unknown”, which will be definitely compared with “Let It Go”.

However, there soon comes a serious consequence upon the kingdom, and Elsa and Anna instantly discern that they must go to the enchanted forest for saving their kingdom, and they subsequently start their journey to the enchanted forest along with Kristoff and Olaf. As usual, Olaf constantly talks a lot as your average comic relief, but he somehow remains endearing as before, and Josh Gad did a solid job of delivering some nice comic moments which surely tickled young audiences around me. 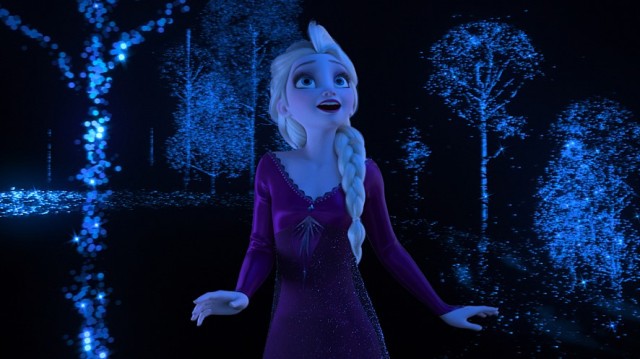 Around that narrative point, the story begins to lose its focus, but director/co-writers Chris Buck and Jennifer Lee, who previously wrote and directed “Frozen” together, keep engaging us while diligently providing to us a series of fantastic moments. While there is an exciting action scene involved with a magical entity which turns out to be far less menacing than expected, we also get an awe-inspiring moment featuring a bunch of giant figures, and the sequence where Elsa bravely attempts to go to the final destination of her journey is as spectacular as expected from the trailer of the film.

And there are also a number of other good original songs besides “Into the Unknown” thanks to Kristen Anderson-Lopez and Robert Lopez, who previously won an Oscar for “Let It Go”. While Idina Menzel surely takes the center as usual with “Into the Unknown” and “Show Yourself”, Kristen Bell and Jonathan Groff have each own moment for demonstrating well their respective musical talents, and I was particularly amused by Gad’s comical performance of “When I Am Older”, which makes a resonating narrative contrast with an unexpected moment of poignancy later in the story.

In conclusion, “Frozen 2” is less special than its predecessor in comparison, but it is still recommendable because it did its job mostly well in addition to giving its young audiences wholesome messages on doing right things and accepting inevitable changes to come in their life. Although I sometimes felt impatient because of its rather thin narrative and underdeveloped supporting characters, I will not deny that I was not bored at all thanks to those terrific visual moments and effective original songs in the film, so I will not grumble for now even though I still have some reservation about it. 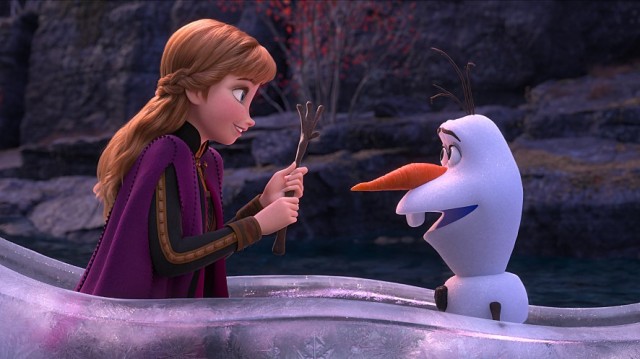