As watching “Adopt a Highway” at last night, I often become a bit reflective on the long, illustrious acting career of Ethan Hawke. At the time of “Dead Poets Society” (1989) and “Reality Bites” (1994), he initially drew our attention with his youthful energy and talent, and then we see him being matured step by step during next two decades as he went through a number of various notable films ranging from “Training Day” (2001) to “Boyhood” (2014), and now he is a dependable actor who can always interest us regardless of whether a movie in which he appears is bad or not.

In case of Logan Marshall-Green’s debut feature film “Adopt a Highway”, Hawke embodies his character’s shy, introverted nature right from his very first shot, and he is often poignant as vividly reflecting how his character, an ex-con named Russell Millings, has unjustly been punished for many years. In the 1990s, Russell was arrested just for possessing an ounce of marijuana, but, due to the “three strike law” during that time, he was unfairly sentenced to a long period of imprisonment, and he is released from the prison only after the law is reversed in California around 20 years later.

Russell happens to get hired at a local fast food restaurant, and he also comes to have his own place at a nearby motel, but many things in the outside world feel new and alien to him. As he tries to adapt himself to his new environment outside the prison, the movie gives us a series of sensitive personal moments accompanied with some low-key humor. During his latest meeting with his parole supervisor, he is told that he can use e-mail for routine report and correspondence, but, not so surprisingly, he does not have an e-mail address, and that leads to a funny scene where he learns how to use the Internet and make an e-mail account for him. 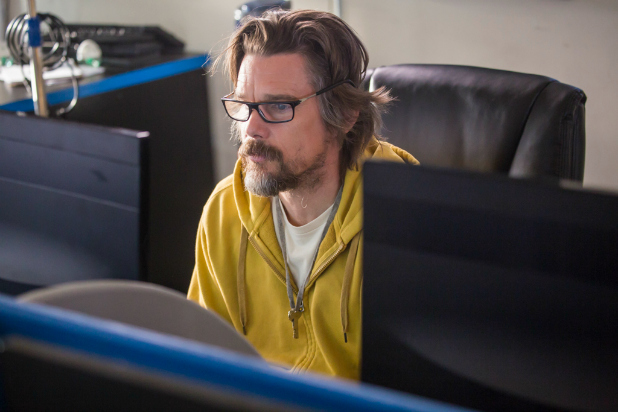 Things seem to get better as he diligently works at that local fast food restaurant, but, as a man whose emotional growth has been considerably stunted, Russell cannot help but feel lonely and lost as there is no one around him. Both of his parents died many years ago, and it looks like there is not any close family member to support and help him. At one point, we see him wandering here and there around in a local amusement park, and there is a bittersweet moment when he tries to feel free and happy just like many others around him.

And then something occurs to him on one day. When he is going through the last hour of his worktime before his following day off, Russell happens to hear someone crying from a dumpster, and, what do you know, he soon finds a little baby girl inside the dumpster. Although he does not know what to do with the baby, Russell comes to take the baby to his residence, and, as understandably sympathizing with the baby, he comes to take care of the baby more than expected. He initially feeds the baby with several edible things he got from his workplace, and then he later goes to a local supermarket for getting whatever the baby needs right now.

He is quite clumsy at first, but Russell becomes more accustomed to taking care of the baby during next 48 hours. He later takes the baby to a nearby beach for watching the ocean together, and there is a lovely moment as the camera calmly observes him talking a lot about himself and his life while holding the baby in his arms with care and affection.

Of course, there eventually comes a point where Russell faces what should be done for the baby as soon as possible. Before coming back to his workplace, he reports to the police and Child Protective Services (CPS), but he does not want to tell everything, and that leads to a very awkward moment for him. Not long after being interrogated, he is notified that he loses his job, and that subsequently prompts him to do something he is not allowed to do at present.

As abruptly pushing its hero into a different situation, Marshall-Green’s screenplay becomes less focused than before, and that is the point where my level of interest begins to decrease. While a small episodic scene involved with a young woman Russell happens to befriend is a little amusing, it does not add much to the overall drama, and a redemptive moment presented around the end of the movie feels artificial to say the least.

Anyway, Hawke’s good performance holds together everything in the movie fairly well, and I appreciate numerous human touches and nuances in his solid acting. Without any once of exaggeration, Hawke, who also participated in the production of the film, quietly conveys his character’s tentative struggle for adaptation and redemption, and he is also surrounded by a number of good performers including Betty Gabriel and Chris Sullivan, though most of them are just demanded to fill their respective supporting roles without many other things to do.

Although I am not wholly satisfied with its overall result, “Adopt a Highway” works as a character study to some degree, and Marshall-Green, who has been mainly known for his notable performances in “Prometheus” (2012) and “Upgrade” (2018), makes a nice directorial debut here in this film. While still looking like a plain test run, the movie shows some considerable potential from him as a filmmaker, and it will be interesting to see where he will go next in his burgeoning directing career.

This entry was posted in Movies and tagged Baby, Ex-convict. Bookmark the permalink.