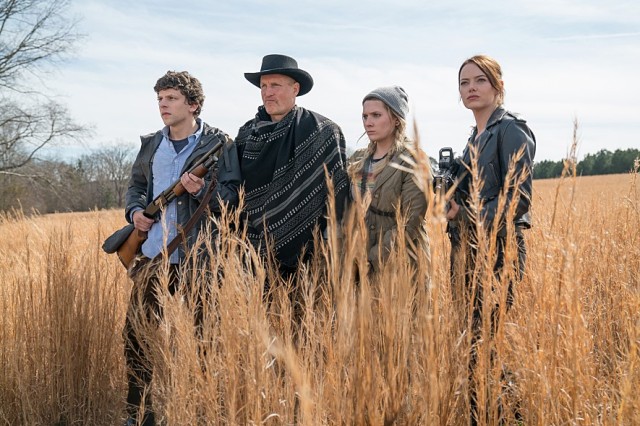 I laughed often while watching the first half of “Zombieland: Double Tap”, but those funny moments in the film only reminded me that I laughed more and harder when I watched its 2009 predecessor ten years ago. Although it has a fair share of fun and amusement and its four main cast members are as delightful and spirited as before, the movie still feels like more or less than a mere reprise without providing anything particularly new for us, and that is the main reason why I came to laugh less during its rather lukewarm second half.

As shown at the end of “Zombieland” (2009), Columbus (Jesse Eisenberg), Tallahassee (Woody Harrelson), Wichita (Emma Stone), and Little Rock (Abigail Breslin) came to form a sort of alternative family after their gory but funny adventure in a post-apocalyptic world full of flesh-craving zombies, and things have been fairly nice for all of them during next 10 years. Now residing in the White House, they occasionally kill zombies just for recreation, and, as usual, Columbus’ narration tells us a number of their silly but useful rules for safety and survival, in addition to how some zombies have been evolved to be more dangerous than before.

However, there also have been some discontent and ennui among our four main characters. Because he has been pretty close to Wichita for last 10 years, Columbus is eager to move their relationship to the next level, but Wichita is reluctant about that, and that certainly results in considerable strain in their relationship. While Tallahassee has no problem with continuing his carefree lifestyle in the White House, Little Rock, who is not that little girl in the previous film anymore, wants to explore more of the outside world as your average adolescent, and that generates friction between her and Tallahassee, who is not exactly a good father figure for her. 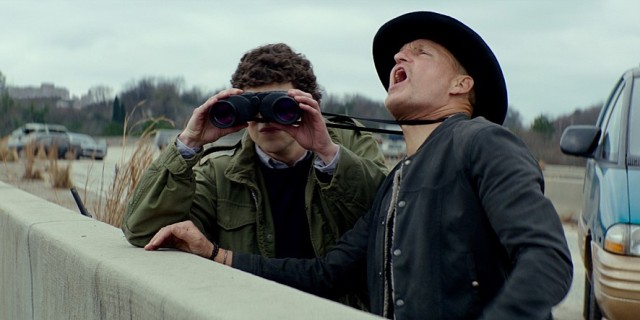 Eventually, Wichita and Little Rock decide to leave the White House together, and Columbus and Tallahassee are caught off guard when they suddenly find themselves alone in the White House. They manage to continue their daily life in the White House for next several weeks, but then they come across another survivor at a local shopping mall, and then the situation becomes more complicated when Wichita unexpectedly returns alone. It turns out that Little Rock left Wichita behind just because she wanted to go to a certain famous spot in Tennessee along with some hippie lad, and Tallahassee eventually decides to track down Little Rock along with Wichita and Columbus because, well, he does care about Little Rock’s safety and welfare.

As Columbus, Tallahassee, and Wichita are going through their another journey across the US continent, director Ruben Fleischer, who previously made “Zombieland” and then got a considerable commercial success thank to “Venom” (2018), throws a bunch of gags besides numerous moments of zombie kill. While we frequently see lots of zombies getting eliminated in various ways as expected, there are also a few absurd scenes presented as “the Zombie Kill of the Year”, and I particularly like the one involved with a certain well-known tourist spot in Italy.

Moreover, the movie tries to expand its world a bit via the introduction of several new characters including the aforementioned survivor, who manages to survive for years despite being far less clever and cautious than our four main characters. Although her supporting role feels a little too broad and superficial at times, Zoey Deutch generates some good laughs via her irrepressible comic energy, and I came to like her character even though shaking my head at her incorrigible thoughtlessness from time to time. 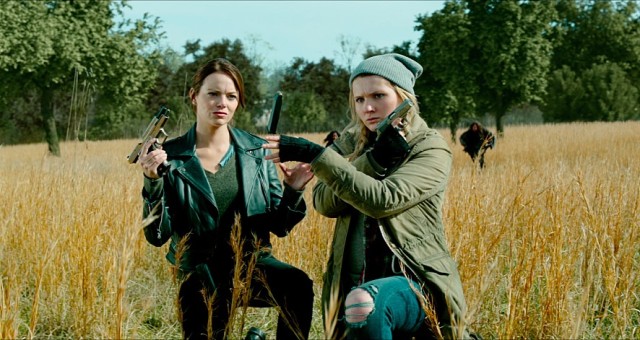 In case of the other new characters in the film, they are less colorful in comparison. While Rosario Dawson is well-cast as a feisty motel owner to whom Tallahassee finds himself attracted gradually, her character is no more than a plot element to function, and the same thing can be said about Luke Wilson and Thomas Middleditch, who briefly appear as a duo not so different from Tallahassee and Columbus in many aspects.

There are also new kinds of zombies, but, seriously, they will not scare or amuse you much if you have ever seen “The Dawn of the Dead” (1978) or “28 Days Later…” (2002). They simply slouch or run toward our four main characters and other living characters, and I was not that excited by the eventual climactic sequence unfolded in a place which may remind you of a similar one shown in “The Land of the Dead” (2005).

At least, Woody Harrelson, Jesse Eisenberg, Emma Stone, and Abigail Breslin, who have respectively advanced a lot since “Zombieland”, enjoy each other’s company whenever they happen to share the screen together. Although no less than 10 years have passed, they still effortlessly click well with each other, and it is a shame that the movie does not utilize their unchanged comic chemistry well compared to its predecessor.

Although I was seldom bored during my viewing, I give “Zombieland: Double Tap” 2.5 stars for being less amusing and entertaining than its predecessor, which I gave three starts without hesitation for several good reasons including the hilarious cameo appearance by a certain famous actor. Sure, I did not feel like wasting my time and money as walking out of the screening room at last night, but it still feels like a rather pointless retread in my inconsequential opinion, and that is all.

This entry was posted in Movies and tagged Comedy, Horror, Zombie. Bookmark the permalink.