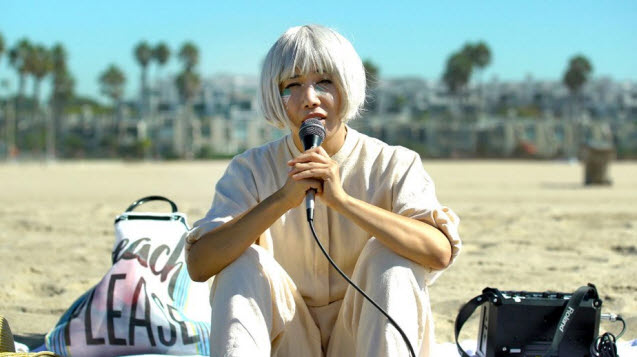 “White Rabbit” is basically another plain tale of youth in confusion and uncertainty, but it distinguishes itself to some degree although it is not so far from other similar recent films such as Lena Dunham’s “Tiny Furniture” (2010). Through its Korean American heroine, the movie often makes some interesting points on racial and cultural identity, and, above all, it is supported well by the solid performance from its lead actress who is talented and charming enough to carry the whole film.

The movie mainly consists of a series of episodes in the daily life of Sophia (Vivian Bang), a young Korean American woman who has been struggling to find her own artistic voice in LA since her art school graduation. In the opening scene, she is giving her latest act of performance in a local supermarket, and she tries to make a social/political statement as playing an immigrant speaking about her hardships in broken English, but, to her disappointment, she does not get much attention from others passing by her, no matter how much she tries.

When Sophia comes back to her cozy and luxurious residence where she has lived alone (I guess her parents are affluent enough to support her financially), she does another act of performance. This time, she simply puts her face into a heap of snack in front of her smartphone, and she promptly posts the resulting video on YouTube, but, alas, this does not get lots of attention either, probably because, well, her video clip is not particularly sensational enough compared to those popular ‘Mukbang’ video clips out there, which usually show eating lots of food in front of camera (I still do not wholly understand why they are so popular on the Internet, by the way).

We also see how she earns her living day by day. Once she contacts with a client through an online application called TaskRabbit, she goes to the client’s residence, and she is requested to do some menial household tasks such as sorting out toys in drawers. To be frank with you, this online service looks rather ridiculous to me, but I guess some people are really willing to pay for a little more convenience in their life.

On one day, Sophia is approached by a young Caucasian male filmmaker interested in casting her in a supporting role of a film he is planning to make. During their first meeting, he keeps emphasizing how impressive she was in her performance in public as well as how suitable she is for playing a strong Asian female character, but it does not take much time for her and (us) to see through his condescending words and attitude, and there later comes an amusingly awkward scene where he eventually comes to reveal his bias and prejudice in front of her.

Meanwhile, Sophia keeps performing in public as usual. At one point, she performs in a Korean restaurant, and, as a South Korean audience, I was a little amused to notice a number of small details which look very familiar to me. When she later tries to make a very serious statement on what many Korean Americans in LA suffered during that infamous riot of 1992, most of her few audiences happen to be African Americans, and it goes without saying that they are not that pleased to hear her words.

And then she is approached by Victoria (Nana Ghana), an African American female photographer whom she previously encountered under a rather disagreeable circumstance. As they come to talk with each other a lot about race and culture, something seems to click between them, and Sophia subsequently finds herself attracted to Victoria although she recently had a painful breakup with her ex-girlfriend.

The mood later becomes a little tense when Sophia gets emotionally attached too much to Victoria, but the movie maintains its lightweight tone as strolling from one episodic moment to another. I enjoyed a few brief scenes which reflect well the cultural background of our heroine, and I smiled a bit as observing how an old-fashioned Korean pop song is humorously utilized around the ending of the film.

Above all, Vivian Bang, a Korean American actress who recently drew my attention for her quirky supporting performance in “Always Be My Maybe” (2019), is simply wonderful whenever she is demanded to hold our attention by herself. I have no idea on how much she exactly contributed to the story written by her and director Daryl Wein, but I can tell you at least that she did a commendable job of imbuing her character with considerable spirit and personality, and she is especially terrific when her character wildly lets out her feelings after an expected moment of heartbreak. While most of a few supporting performers surrounding Bang merely fill their respective small parts as required, Nana Ghana, who also participated in the production of the movie along with Wein and Bang, gives a fine performance to remember, and her effortless interaction with Bang on the screen is one of the strong aspects of the film.

Like Wein’s previous work “Lola Versus” (2012), “White Rabbit” suffers from its thin narrative at times, but it is fairly likable while mostly working well as the showcase of Bang’s undeniable talent and presence. She is indeed a good actress who deserves more opportunities to show more of her acting ability, and I sincerely hope that this movie and “Always Be My Maybe” will lead her to more good things in the future.

This entry was posted in Movies and tagged Artist, Korean American. Bookmark the permalink.