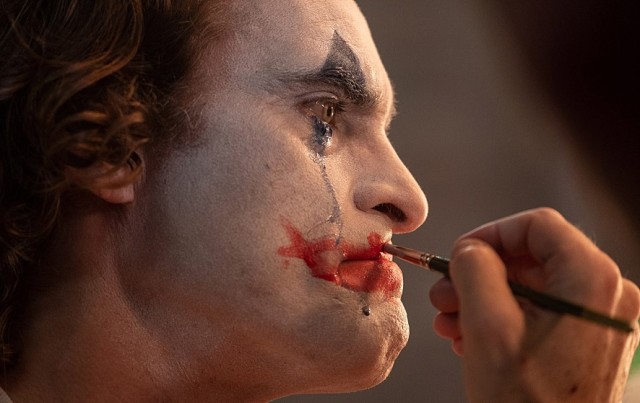 “Joker” is alternatively depressing and alarming to watch. Monotonously grim, morbid, sour, unpleasant, and vicious from the beginning to the end, it attempts to thrust us into the warped state of mind of a very disturbed man bound to be one of the most infamous villains in the American comic book history, but it merely presents its adamantly realistic details without any depth or insight or attitude, and that is why I am really concerned about the possible toxic influence of this messy character study outside the screen.

Set in Gotham City in 1981 (You may be a bit amused by a brief shot later in the film which shows a movie theater showing two notable American films of 1981, by the way), the movie begins with one bad day of a clown guy named Arthur Fleck (Joaquin Phoenix). While doing his latest job on a street outside, Fleck happens to be teased and then beaten by a group of juvenile delinquents, and he gets his wage cut by his boss because of that. When one of his colleagues later offers him a gun for protection, he is understandably reluctant, but he eventually accepts it, and that reminds me of what Anton Chekhov once said: “If you say in the first chapter that there is a rifle hanging on the wall, in the second or third chapter it absolutely must go off.”

Fleck’s shabby and melancholic private life mainly revolves around his ailing mother Penny (France Conroy), who has probably been the only person he really cares about. She has kept sending letters to a certain prominent billionaire who is about to do the campaign for the upcoming mayor election in the city, and, for a melodramatically loony reason which will not surprise you much when it is eventually revealed later, she desperately believes that billionaire in question will help her and her son someday, though her son is rather skeptical about that. 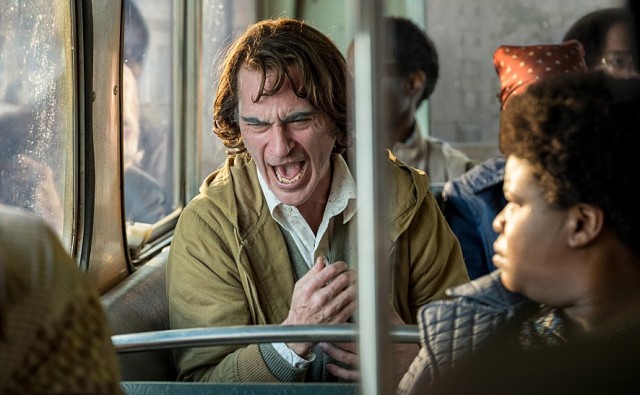 We see how things get worse and worse for Fleck and everyone else in the city. Due to the ongoing strike of city garbage collectors, the city has become dirtier day by day, and its many citizens become angry and resentful due to the economic depression as well as the growing social gap between them and those rich, powerful guys including the aforementioned billionaire, who seems to be willing to do anything for making the city better but does not hide his condescending attitude at all to those poor people out there including Fleck and his mother.

In addition, Fleck’s mental condition, which has been quite problematic as shown from his occasional bursts of uncontrollable laughing, becomes more deteriorated as he cannot get any medical support from the city government, and his mood becomes far worse as he happens to get fired for a serious mistake he makes while he is supposed to entertain sick children at a local hospital. As he cannot get any counseling or medication anymore, he becomes quite more troubled and disturbed before, and that finally leads him to the expected breaking point, which will surely strike you hard with remorseless brutality.

After that narrative point, the screenplay by director Todd Phillips and his co-writer Scott Silver goes for more morbidity and darkness while also trying to be grounded in gritty realism. The movie frequently evokes the works of Martin Scorsese and William Friedkin during the 1970s in many aspects, and Fleck’s increasingly deluded and alienated state will surely remind you of Travis Bickle in “Taxi Driver” (1976) and Rupert Pupkin in “The King of Comedy” (1982). As a matter of fact, Robert De Niro, who memorably played these two characters, appears in the film as the host of a popular talk show with whom Fleck has been obsessed, and there is even a scene reminiscent of a certain delusional moment in “The King of Comedy”. 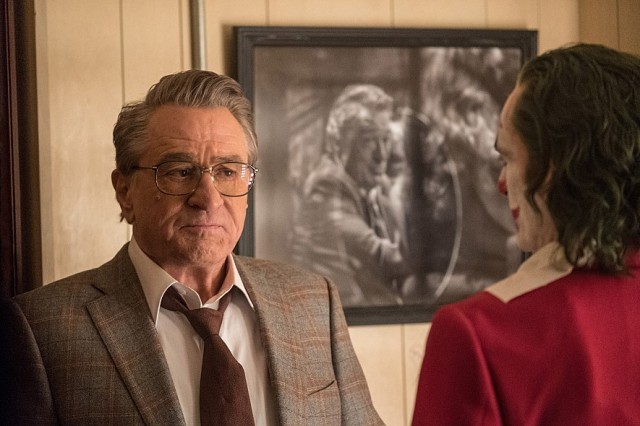 However, Fleck does not have much interesting human quality to engage us compared to Bickle or Pupkin. Although the movie establishes its hero’s mental state rather well with numerous disturbing details, Fleck still remains to be a merely vile and dangerous guy, and the movie often blatantly forces us to sympathize with his sickening viewpoint in a way not so far from what Stanley Kubrick did in “A Clockwork Orange” (1971). Furthermore, the movie shows no particular attitude or opinion on its hero’s festering evil, and, to make matters worse, it actually looks like getting intoxicated with that as his violent actions throw the city into more violence and chaos during its last act.

In case of Joaquin Phoenix, who is no stranger to troubled heroes as shown from “The Master” (2012) and “You Were Never Really Here” (2017), he shows considerable commitment as usual, but his admirable effort is not supported well by the movie, and he often looks like doing your typical Oscar season stunt on the screen. The movie also seriously under-utilized its several notable cast members including De Niro, and Frances Conroy and Zazie Beetz are particularly wasted in their thankless roles.

Overall, “Joker”, which somehow won the Golden Lion award when it was shown at the Venice International Film Festival in last month (It also won the Graffetta d’Oro Award and Premio Soundtrack Stars Award, by the way), is just mean, cruel, and obnoxious, and I walked out of the screening room as feeling quite glum and depressed. Yes, it is surely a deeply troubled movie destined to come out of our equally troubled time, and audiences and critics will understandably talk a lot about it, but, folks, does it really make any point on whatever it wants to be about? 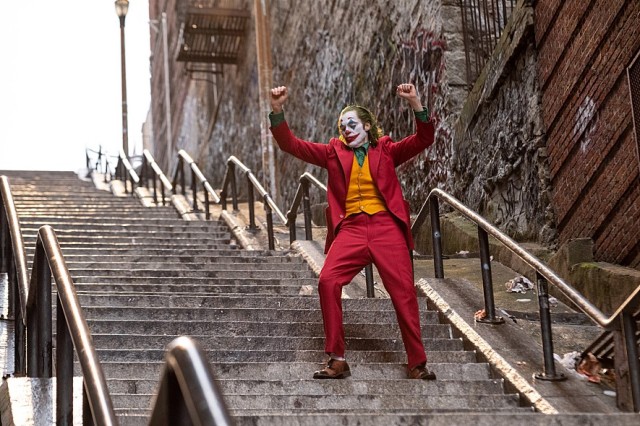 This entry was posted in Movies and tagged Clown, Mental Illness. Bookmark the permalink.