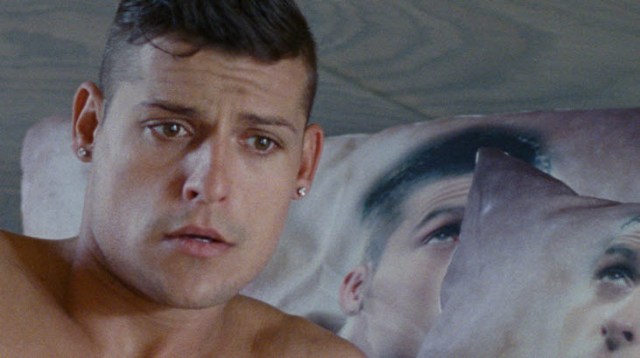 Portuguese film “Diamantino”, which won the Grand Prize when it was shown in the International Critics’ Week section at the Cannes Film Festival early in this year, is a whimsical mixed bag which will alternatively baffle and amuse you. Although it is not wholly successful in its wild and broad satiric approach, the movie is at least seldom boring as busily hopping from one weird moment to another, and you may have a fair share of fun with it if you are willing to go along with its wacky joyride full of weird sights such as a bunch of big, fluffy dogs prancing in a cloudy pink background.

The movie opens with a soccer game during the 2018 FIFA World Cup in Russia, and we see those big, fluffy dogs being imagined in the mind of Diamantino Matamouros (Carloto Cotta), a professional soccer player who is as famous and popular as real-life Portuguese soccer player Cristiano Ronaldo. Whenever he is about to get a goal for his team, he imagines himself surrounded by those big, fluffy dogs, and that has always made him feel both focused and comfortable enough for attaining goals.

While he succeeds again as usual during the last minutes of that soccer game, he is not so lucky during the following Finals. When everything depends on whether he kicks the ball correctly, Diamantino finds himself quite baffled as he cannot imagine those big, fluffy dogs as before, and that accordingly leads to a disastrous moment of failure and humiliation to be ridiculed via a bunch of online memes. Furthermore, his old father, who has been his trusted manager, suddenly dies around that point, and there is no one to guide and protect him now, so he feels quite miserable as being cornered and abused by his mean and greedy twin sisters.

Further depressed by his crumbling status as well as the loss of his father, Diamantino decides to retire, and he also announces during his TV interview that he is going to adopt a refugee kid just because he was emotionally affected by his accidental encounter with a bunch of refugees who sailed across the Mediterranean Sea. As watching this TV interview, a secret service agent named Aisha (Cleo Tavares), who has been investigating whether Diamantino is involved in money laundering business, comes to get a rather crazy idea for her ongoing investigation; she will disguise herself as an adolescent refugee boy, and she may get a chance to delve more into her investigation subject once she gets adopted by him.

Aisha’s close colleague, who also happens to be her lover, is rather skeptical about Aisha’s plan, but, what do you know, Aisha succeeds in her disguise because Diamantino is too naïve and self-absorbed to discern that ‘Rahim’ is actually a woman, and we accordingly get a number of goofy moments while he clumsily tries to be a good daddy to Rahim at his huge and sumptuous mansion strewn with silly objects reflecting his big ego and juvenile narcissism. As Aisha embarks on her undercover investigation, it does not take much time for her to realize that Diamantino is too simple-minded to do money laundering, and, not so surprisingly, it soon turns out that his evil twin sisters are the ones doing money laundering behind their back.

In addition, Diamantino’s twin sisters has also been dealing with some shady biotechnology research institution, which is later revealed to be connected with the Portuguese government. There is a scientist who wants to extract what makes Diamantino so special as a soccer player, and this scientist’s clandestine research is fully supported by a powerful political figure who also wants to use Diamantino for driving the public opinion toward leaving the European Union. I must say this part of the movie is rather too blatant, but I will not deny that I was amused a bit by the blatant appropriation of a certain infamous campaign slogan in US.

As things get more outrageous along its increasingly goofy narrative, the screenplay by directors Gabriel Abrantes and Daniel Schmidt comes to lose some of its narrative momentum, and the whimsical mood in the film becomes a bit tiresome, but the movie continues to provide us enough amusement and bafflement to hold our attention. Although I am not so sure about whether the finale works as well as intended, I appreciate at least how willing the movie is to go for more absurdities, and the score by Adriana Holtz and Ulysse Klotz is effective mixed with a number of various pieces of music including Béla Bartók’s “Music for Strings, Percussion and Celesta, Sz. 106, BB 114”, which is fabulously utilized during a scene which may take you back to a certain iconic element of Stanley Kubrick’s “The Shining” (1980).

It helps that the movie is supported well by the enjoyable comic performance of Carloto Cotta, who did more than merely looking dazed and confused throughout the film. While willingly hurling himself into many absurd moments in the film, Cotta wisely avoiding playing his character like a mere jerk, and he is also supported well by several supporting performers including Cleo Tavares, who keeps her performance straight for more laughs just like Cotta and the other main cast members in the film.

On the whole, “Diamantino”, which deservedly received the Palm Dog at the Cannes Film Festival considering all those big, fluffy dogs in the film, is too weird for some of you, but it is surely something you cannot easily forget, so I recommend you with some reservation. I still think it could be edgier and wilder, but I was amused and entertained enough during my viewing, and I think you should give it a chance someday if you are really looking for something odd and different.

This entry was posted in Movies and tagged Comedy, Conspiracy, Crime, Soccer. Bookmark the permalink.